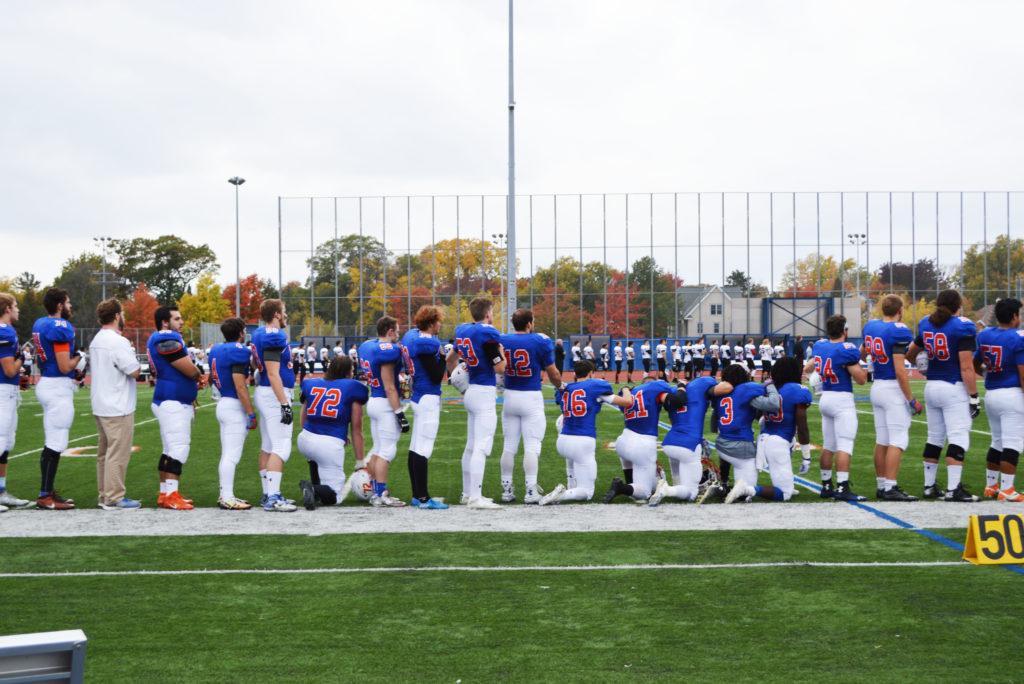 Members of the Macalester Football team kneel during the playing of the national anthem in solidarity with those facing racial discrimination. Photo by Rajnee Persaud ’19.

Several Macalester Football players kneeled during the playing of the national anthem before their game against Grinnell College on September 24 as part of the nationwide anti-racist pregame protest initiated by Colin Kaepernick. Pia Mingkwan ’17, a member of the Women’s Soccer team, has also made the choice to kneel, first showing her support on September 23 at home when the team took on Hamline. In this way, these individuals have chosen to show their solidarity with those facing racial discrimination and police brutality in the US.

This simple action is part of a larger movement. What began as a silent protest from Colin Kaepernick on the sidelines of a San Francisco 49ers preseason game has spread to many sports at all levels of play. Kaepernick has been joined by other professional football players who chose to kneel or raise a fist during the playing of the anthem to make a statement against police violence targeting African Americans. Kaepernick’s action has set off a chain reaction among athletes all over.

Although using the playing of the national anthem as a space for peaceful protest has been met with criticism, it has also been widely embraced. In Madison, Wisconsin, nearly all the members of two high school football teams knelt during the anthem.

Sports fans and social activists everywhere have heard of these protests, but the protest had not been seen concretely in Mac athletics until football players Sam Bordo ’18, Austin Dischinger ’18, Tre Nowaczynski ’17 and Aonga Shalita ’17 knelt before the Grinnell game. “I was thinking about [kneeling] early on in the season, but I never thought it was something I was going to get support for, so I didn’t make it a reality. Then Austin asked: ‘should we do this?’” Nowaczynski said.

The next game, the four were joined by their teammate Chance Carnahan ’18 and later by Carrigan Miller ’19. “I was always in support of Kaepernick’s decision to kneel, I just wasn’t sure of how our coaches and teammates would feel about it … after I saw them doing it, I talked to them and started,” Carnahan said.

Despite the national attention surrounding this issue, these players’ actions have been met with little feedback from teammates, coaches or the community at large. A parent of a former Mac Football player tweeted in shock that a team they respected would do such a thing, and before their first kneel a teammate asked Nowaczynski about the significance of kneeling.Besides these moments, and some conversations with friends, the players have not seen much of a response.

When asked what kneeling means to them, the players echoed each others’ sentiments. “I decided to do it because I wanted to support my teammates in something that I think is a real issue and a struggle that they deal with everyday,” Bordo said. “We’re all in the same place… we’ve all done the same things to get here, yet people experience a different struggle as a result of nothing… I think it’s important to have people who aren’t personally affected by the issue to support it as well.”

“For me, while still recognizing the significance of the flag and being respectful of that, it’s a space to also recognize that there are some big structural issues going on [in our country] that I don’t agree with. It’s a place for me to be in solidarity with people nationwide on issues that I feel need to be addressed,” Nowaczynski said.

Carnahan elaborated, challenging the action’s greatest criticism and stressing that kneeling shouldn’t be considered unpatriotic. “I completely disagree [that it’s disrespectful] … as football players we take a knee a lot,” he said. “After practice everyday we take a knee when we talk to our coach; we’re showing respect towards him. When we take a knee during the national anthem, we’re showing that we still have respect for our country, respect for our flag, respect for our military, but at the same time we recognize that there are a lot of issues that we’re overlooking… and I’m trying to bring attention to that.”

For members of the Macalester Football team, the decision to kneel is clearly a very individual choice. Still, it carries a lot of weight and significance to break away from the rest of the team. Despite the lack of questions and conversations within the team about the issue, the right of the players to protest as individuals has been reaffirmed by continued team unity. “We know we have some teammates who respectfully disagree with our position, but there’s no rift caused as a result of that,” Bordo said.

That being said, acting as a small collective within the larger team makes it much easier. “We definitely felt better doing it knowing we had support,” Nowaczynski said. “I don’t feel anxious about it at all anymore … I feel more solidarity in the team knowing that the act itself doesn’t create a lot of tension whether or not people hold different views.”

Unfortunately, this sort of civility in the face of opposing viewpoints does not exist everywhere. While facing Beloit College on October 22, one of Mac’s team managers overheard the jeers of fans reacting to Beloit’s athletes kneeling. “Some of their fans were calling them cowards, which really doesn’t make sense because I feel like it’s a very courageous thing to do,” Carnahan said. “There are definitely people who disagree with us [at Mac], but we go to a very supportive and encouraging school to protest at, so we haven’t got a lot of those negative reactions.”

The players expressed their desire to spark conversations about racial inequality through their actions. “I would encourage people to talk about it,” Nowaczynski said. “I know people have opinions. I know that they are thinking things even if they don’t feel comfortable doing it themselves. Being able to talk about it is a big step and gets more people thinking about the issues as well.”

Some athletic events lend themselves better to this form of protest than others. This does not, however, mean that those who do not participate in varsity athletics or who would like to continue honoring the flag with the traditional standing do not have other avenues to express their opinions and raise awareness of racial inequality in the US.