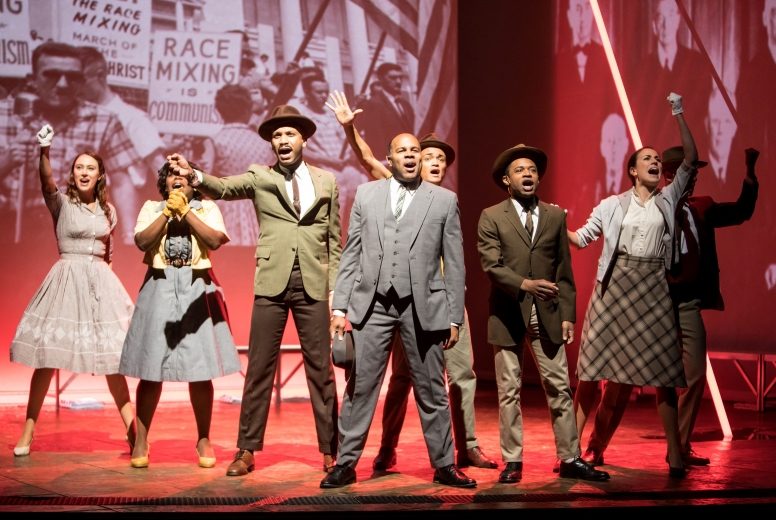 Until November 6, the Guthrie Theater presents The Parchman Hour, a play inspired by the Freedom Riders of 1961. For a play that takes place over half-a-century ago, it holds startling relevance. Mike Wiley, the play’s author, forces the audience to draw parallels between segregation of the ’60s, a time seemingly removed from our own, and modern discrimination. By shedding light on issues our country faced in the past, Wiley makes us reflect on where we stand today. He forces us to realize that the Twin Cities are still wrought with racial violence.

Being a play of historical fiction, The Parchman Hour invites the audience to imagine what it was like to live in the ’60s American South. Through stage design that mimics the Alabama landscape and a musical score reminiscent of ’60s jazz and soul, the play allows one to travel back in time. Thus, it shows some of the civil rights movements’ unsung heroes, the Freedom Riders, speaking directly from one era to another.

The Freedom Riders protested Jim Crow segregation laws in transportation, which had prevented black people from riding in the “white” section of trains. Seeking to integrate this section, a group of nine riders that was diverse in both gender and racial identity rode together from New Orleans to Jackson, Mississippi. The riders were met with violence along the way, some beaten almost to death by members of the public. In Jackson, they were charged with disturbing the peace and brought to Parchman Farm Penitentiary, a harrowing facility led with an iron fist by Deputy Tyson (played by Terry Hempleman).

The characters in The Parchman Hour are loosely based on actual figures from the civil rights movements of the ’60s, many of whom your history classes may have forgotten. As a group, the Freedom Riders have stood the test of time in our history books, but they do not get the recognition they deserve. This play brings the individual voices of this group into the forefront, allowing the Riders to tell their own stories. The play’s director, Patricia McGregor, cleverly pieces these specific stories together to create a snapshot of the larger struggle against segregation in America.

Embodying figures such as Stokely Carmichael and Martin Luther King Jr., the play’s actors showed a little-known side of these civil rights activists. For Stokely, a Trinidadian-American activist made famous for his involvement in the Black Panther Party, the Freedom Rides represented some of his first actions in the nonviolent desegregation movement. He was in his first year at Howard University when he joined the Freedom Riders. Kory LaQuess Pullam, the actor playing Carmichael, portrayed the man in his youth. Pullam shows Carmichael as a quiet, clever leader, just as he was beginning to develop into one of the most prominent activists of the time. He is young and vibrant, determined to help the other Riders persist through their torturous imprisonment.

As the play follows the Freedom Riders through their time in prison, the audience watches their relationships develop. Each actor is charged with the difficult task of showing these relationships in all their intensity. Moreover, each performer portrays multiple historical figures throughout the play. This blurred the lines between races and genders, as each performer plays figures with varying identities. The choice of characterization fits well with the play’s theme of integration, illuminating the social constructions present within perceived differences. In order to remain strong-willed against their adversaries, the Freedom Riders perform mini-plays for each other that break down constructions of race through this portrayal of multiple characters. While The Parchman Hour is wrought with serious themes, these plays within a play bring a sense of humor. They show how these fighters at the forefront of the civil rights movement are also human. They use music and humor to deal with the horrors they experience, and are remarkably resilient in the face of hardship.

By showing the Freedom Riders as real people and not as shimmering historical figures larger-than-life, The Parchman Hour shows us how real people can fight against racial discrimination in the present. Following the performance, I doubt that any audience members left uninspired to make a change in their community. The music in particular helped to create this inspiration, showing the emotions of these characters in a way that only music can.

The play showcases some of the Twin City’s most talented musical performers, including gospel goddess Zonya Love. Sanford L. Moore, the music director, uses the talent on stage to raise emotional tension as the play progresses to a stunning conclusion. In the final moments of the play, the performers lined up at the front of the stage. Under soft, mournful lighting, they spoke the names of people of color who have recently lost their lives to racial violence. This heart-wrenching finale shook the audience awake, showing them that the Freedom Riders and other civil rights activists are not dust-covered figments of an irrelevant past. Rather, they are real individuals whose fight survives in those currently battling racial injustice. They are models of how we can all continue to resist the violence that suffocates our communities, and a reminder that we have yet to defeat discrimination in America.