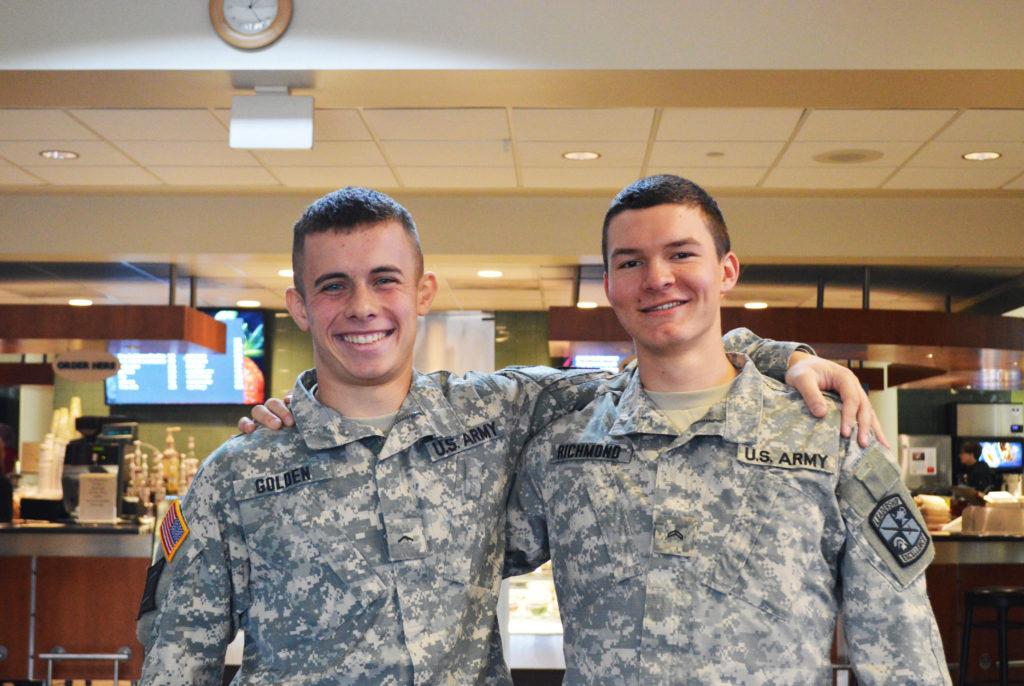 Levi Golden ’20 and Sam Richmond ’19 suit up every Wednesday as part of their ROTC program. Both are involved in varsity athletics at Mac in addition to their ROTC commitments. Photo by Rajnee Persaud ’19.

Levi Golden ’20 and Sam Richmond ’19 have a lot on their plate. Golden is a first-year at Macalester, and is interested in US history and policy. He is a linebacker for the Mac Football team, and has been playing the sport for the last four years. Richmond is a sophomore who has run both cross country and track since he was in middle school. What brings the two together is their current enrollment in an ROTC program. Although Macalester does not technically have its own ROTC program, students are able to work within the University of Minnesota’s program.

At 6:20 a.m. every Monday, Wednesday and Friday, Golden and Richmond can be found at the University of Minnesota’s campus for physical training (PT). Lasting for an hour, PT is an intense series of workouts, designed to condition students for the physical requirements of the Army. After PT, both students head back to Mac to prepare for the day of classes ahead. As if their workload wasn’t enough, the two also attend Military Science (MS) class on Wednesdays from 1:25 to 2:15 p.m. at the U. MS educates students on the tactical elements of the Army, as well as the causes and policies behind armed combat. Lead labs, which are all-day exercises consisting of time in the barracks, land navigation and medical training, occur on a few Saturdays each month. Golden and Richmond have to balance these courses along with the normal academic rigors of Mac and the physical and time demands of a varsity athlete’s schedule.

When asked about why they decided to join ROTC, they both gave similar answers. In Golden’s case, he talked about his desire to give back: “Ever since my junior year, I have been interested in US history and politics. I developed an understanding that this country is exceptional,” he said.
He also emphasized the opportunities his family has been given in this country as Jewish immigrants. “As a Jewish American, my family had opportunities arriving here that other countries wouldn’t offer.” He says he “felt a certain kind of debt” towards America and that serving his country in the military was the best way to repay that debt.
Richmond also said he wanted to give back to the United States. “I wanted to serve my country,” he said. “It’s given a lot to me and my family.”

Both athletes felt that their history in varsity sports has been beneficial towards their work in ROTC. “You need to work with a team,” Golden said when asked about the connection between sports and the military. “You need to build trust and camaraderie.”

Although the balance between school, sports and ROTC seems extremely difficult to manage, both students say all parties make it as easy as possible for them. Golden has to miss some lead labs for football games on Saturdays and said that the “[ROTC staff] are very understanding. Varsity sports take preference.”

Golden and Richmond both have a lot of work, but Richmond may have a bit more. He decided to join ROTC in his sophomore year, so he has multiple MS classes per week in order to make up for lost time. “I had been thinking about joining for a while. I was going to join [the Army] after graduation,” Richmond said when asked about why he decided to join later. Over the summer he talked to other ROTC affiliates and decided that the advantages of joining ROTC now outweighed the extra work load he would have to take on. He echoed Golden’s statement that ROTC staff are very understanding.

According to Golden, Glen Hartford ’17, a member of ROTC and the Mac Football team, helped in his decision to join. Hartford was his tour guide when Golden visited Mac his junior year and spoke about ROTC. When Golden was accepted to Mac and wanted to join ROTC, he emailed Hartford who helped put him into contact with ROTC staff. “I doubt he remembers me from the tour, but he really helped me,” Golden said.

It’s safe to say both athletes have a heavy schedule, but they don’t seem to mind. “I’ve been able to manage it,” Richmond said. Despite being busy with extra commitments at odd hours, both Richmond and Golden go to a school they like, participate in a sport they enjoy and are preparing for their future. They wouldn’t have it any other way.