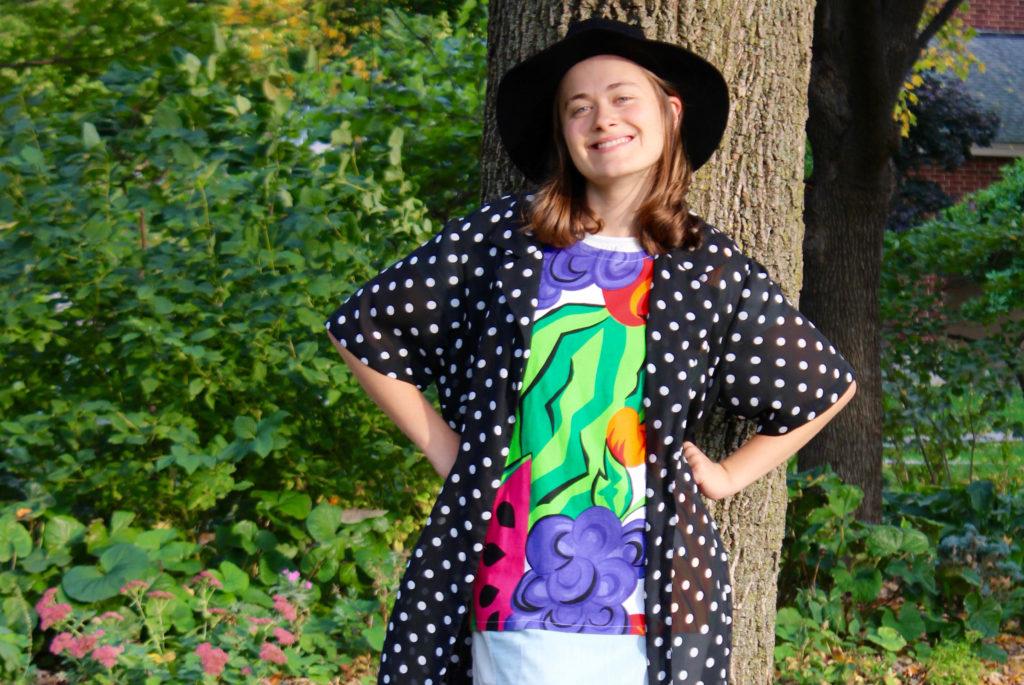 Ellie Hohulin ’19 is undeniably cool. She’s the kind of person who appreciates a visit to all sorts of department stores and understands the importance of a good hat. Hohulin’s relaxed and intuitive approach to style is epitomized by the way in which she picks out her outfits. Her strategy is linked to the fact that she’s a self-described “mess.” According to Hohulin, “At home, my clothes are all over the floor…I’ll see two things next to each other, and I’m like ‘Woah, that looks really cool together!’ So my outfits often appear through random coincidences.” Hohulin’s disdain for early mornings also fuels her stylistic pursuits. She describes how, “I started waking up earlier, and I’m not a morning person at all, but when I have a fun outfit that I’m going to wear, it helps me wake up and

brightens my day. Especially once I started having to wake up at 6 am.” These descriptions may appear to paint Houlin as a frenzied whirlwind of a person, but in person she is far from this image she creates for herself.

Houlin recognizes that she is often perceived as being “quiet,” which prompts her to dress “pretty loud.” According to her, people see her “crazy and weird side” once they get to know her. This “side” is reflected in her propensity for mix-matched colors and unusual pairings. In high school, she ironically sported a neon orange dress and a neon yellow jacket, only to be called out in a typical catty hallway fashion: “What is that girl wearing?” But Hohulin couldn’t care less. In her words, “I was like ‘I’m just doing me!’” Holulin remembers donning a funky blue scarf in middle school and receiving a surprising number of compliments, leading to the realization that she could push boundaries with style without getting “horrendous responses.” This awakening came after a phase in which Hohulin wore black soccer shorts day-in and day-out, regardless of occasion or accompanying top, part of her “tomboy phase.”

Now, Hohulin is far from her black shorts days, although she still experiments with more masculine styles. Since arriving at Macalester, Hohulin views her style as evolving into a few personas. She embraces getting

“pretty dressed up,” but also she also rocks one-piece sweatsuits and “boyish styles.” As an art history major, she is drawn to using style as a “mechanism of expression,” especially since people often misunderstand her major and ask about her preferred medium. Accepting that she’s quite the art history nerd, Hohulin gushed about how she “just loves pieces that are art-inspired.” Her inspiration stems from “seeing people on the street, and around Macalester.” She enjoys seeing the occasional funky footwear connoisseur in a museum, and complimenting their fun footwear, with something along the lines of, “Wow, you have the coolest shoes on!” Hohulin compliments and moves on, tucking away the inspiration for future Goodwill shopping excursions. Holulin also draws inspiration from associations with “a place I’ve been or a place I’d like to go.” For example, Hohulin visited Japan last summer, and fell in love with Japanese fashion. Before traveling abroad, Hohulin had never shopped at the famous brand Uniqlo. But later she was happy to find a Uniqlo store in her hometown of Chicago. In general, Hohulin loves the idea of visiting department stores in different countries, solely for the fact that she can find “things that are just so unique to there.”

Hohulin is also excited by thrifting.

Houlin gushed to me about these pants she bought one of the first times she thrifted. They’re high-waisted capris that “sound pretty ugly,” but they’re actually floral patterns and really bright. She pairs them with everything. According to her, “I don’t care what color or patterned top I wear them with. I just wear them with everything.” This story epitomizes the sort of unique and haphazard approach to personal style Hohulin adopts, but no one’s going to argue that it’s not working for her, or that she isn’t assembling interesting and aesthetically pleasing ensembles. I still remember running into Hohulin last year in Café Mac, approaching her and silently gesturing my approval and speechlessness at her flawless ability to rock four or five patterns in one outfit. It’s an unparalleled skill.