Fossil Free Mac demonstrates during Board of Trustees’ visit 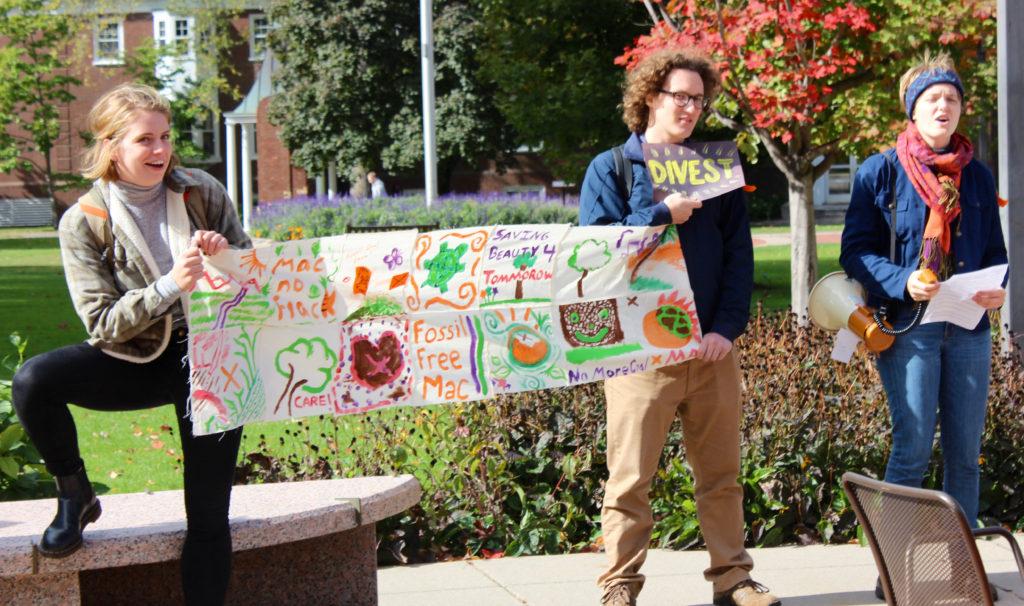 Members of Fossil Free Mac led a demonstration advocating for Macalester’s divestment from the fossil fuel industry. They argued it went against the school’s values of sustainability and multiculturalism to profit from the industry. Photo by Emma Carray ’20.

FFM is currently advocating for Macalester to divest its endowment of all stocks held in the Carbon Underground 200 (the world’s top 200 fossil fuel-related companies), which amounts to approximately $25 million of Mac’s $762 million endowment.

The group is currently ramping up its efforts and attempting to work with school administration and the BoT to further its divestment aims. The action held last Friday, with a Facebook event titled “Rally for a Fossil Free Mac,” was held to draw the attention of the BoT as trustees made their way from the Campus Center to Weyerhaeuser.

The description of the Facebook event stated, “The Board of Trustees will be walking past at noon, and we want to show them that Macalester students care about climate justice.” The broader intent of the event was to convey the message that “Macalester’s values are not currently reflected in our investments in fossil fuels. We are supporting an industry that is destroying our planet and most affecting communities of color and other marginalized groups.”
FFM co-leader Becca Krasky ’19 confirmed these sentiments in a brief interview during the rally.

“We wanted to have a demonstration of the student body’s feelings about climate change and climate justice, and specifically we wanted to show the Board of Trustees that Mac students care about the environment and we care about what our investments are saying to the world,” Krasky explained.

Krasky and a group of over 30 FFM members and other supportive students delivered their climate justice-related message for close to an hour on a brisk, blustery early afternoon, from around 11:45 a.m. to 12:30 p.m. With Krasky, co-leader Jack McCarthy ’18 and several others leading the charge with a megaphone, the determined group chanted, engaging passing students in conversations about divestment and soliciting signatures for their longstanding petition.
Krasky, through the megaphone, proclaimed, “Divestment is a social justice issue! What do we as a college value? Multiculturalism? Internationalism? Civic engagement? Divest to support our values!”
The decked-out demonstrators — complete with blue wind-turbine capes, with several holding banners with slogans such as “Mac students: Divest!” — waited in anticipation for the BoT to exit the Campus Center.

Only a couple minutes after 12:00 p.m., the BoT emerged from the Campus Center in a flurry of suits, hats and heavy coats, with the demonstrators still chanting enthusiastically and ready for conversation.

The reaction of the board members was almost immediately apparent, with several choosing to walk quickly and purposefully through the protesting students and straight to Weyerhaeuser, while others paused for a minute or two.

Among the BoT members who interacted with students was President Brian Rosenberg, who exchanged a few words with FFM demonstrators. Hannah Shumway ’19 said, “BriRo came up and talked to us, which was nice. He mostly said, ‘I hear what you are saying,’ but didn’t offer many of his own opinions—we have met with him in the past and at this point he wasn’t giving us any feedback.”

Shumway, a member of FFM’s ‘core leadership team,’ believes strongly that Macalester must reconcile its position on divestment with its stance on other environmental issues. Said Shumway of her reasons for involvement with FFM and the demonstration: “I thought that it was pretty hypocritical that Mac was still involved in fossil fuels while preaching sustainability and Zero Waste, and so I felt it was our moral imperative to at least advocate for divestment.”

President Rosenberg’s brief engagement and other conversions with trustees, though, were eclipsed by the direct response that BoT member Mark Leonard offered to the protesting students. Asking for the megaphone from Krasky, Leonard gave a brief but emphatic comment concerning his opinion on the rally.

“I was unable to find out who was in charge of this organization to have a serious discussion on this issue. It is an important issue, but I don’t think this is the best tactic for what [they] are trying to do,” Leonard said.

After his megaphone statement to the crowd, Leonard had a brief conversation with Krasky about the issue of divestment and how it relates to the BoT.

Krasky relayed the results of this

connection. “We just heard from Mark Leonard that we would prefer to sit down and talk about this and have a rally, but it’s important for him to know that it’s an issue… Right now we are having all these conversations with board members that we were told we couldn’t have because they didn’t have time in their schedules to meet,” Krasky said.

Several members of FFM met with board members Jeff Larson and Aukse Jurkete last spring to discuss the monetary issues of divestment.
Collin Dobie ’19 was one of the FFM members in this meeting. “The outcome of that meeting was that we presented the financial argument as well as we could, but they didn’t buy it,” Dobie said. “Their main point was that there isn’t enough history with the funds that are out there that filter out the Carbon 200, and they also said that we should be looking more at what we can do on campus to further sustainability.”

Essentially, the BoT gave the issue back to FFM to re-evaluate, instructing the FFM team to “figure out exactly what we could be investing in and find funds that have the history and have been proven to do well,” Dobie said.

Mac’s student liaison to the BoT, Peace Madimutsa ’17, did re-present FFM’s platform to the entire board during its first full meeting session earlier on Friday, which included a point by Larson that Dobie disputed about the meeting that occurred last spring.

“Contrary to what Jeff Larson said during the meeting, we did leave that meeting in the spring intending to have communication in the future. He presented it as something we talked about and was a closed matter–which is not how the end of that meeting [last spring] went,” Dobie said.
Although Dobie admitted that FFM had not reached out to a member of the board before trustees arrived on campus last week, there was specific reasoning behind that decision.
“We felt it was important to really show the board that there is still support for this issue. Our hope was not to be confrontational; we wanted to present student support and hopefully move into conversations with board members from there,” Dobie said.
While Krasky has not yet heard from Mark Leonard about a potential future meeting, Fossil Free Mac members’ conversations with other board members that did engage them during the rally, though, have been fruitful thus far.
“We have communicated with two other board members, Seth Levine and Timothy Hart-Andersen, and Tim is going to try to be at a meeting we are having soon with professor Chris Wells and Vice President for Administration and Finance David Wheaton about reinvestment. Seth Levine … would also like to Skype with us at some point,” Dobie said.
While the long-term implications of the rally or results of potential further conversations with board members about divestment remain to be seen, Krasky and FFM view the impact of the rally in a positive light. Speaking at the end of the demonstration, Krasky said, “I would say that this has been wildly successful and that we are demonstrating to the student body and to the board that even if they have two minutes to talk to us that it is still something.”