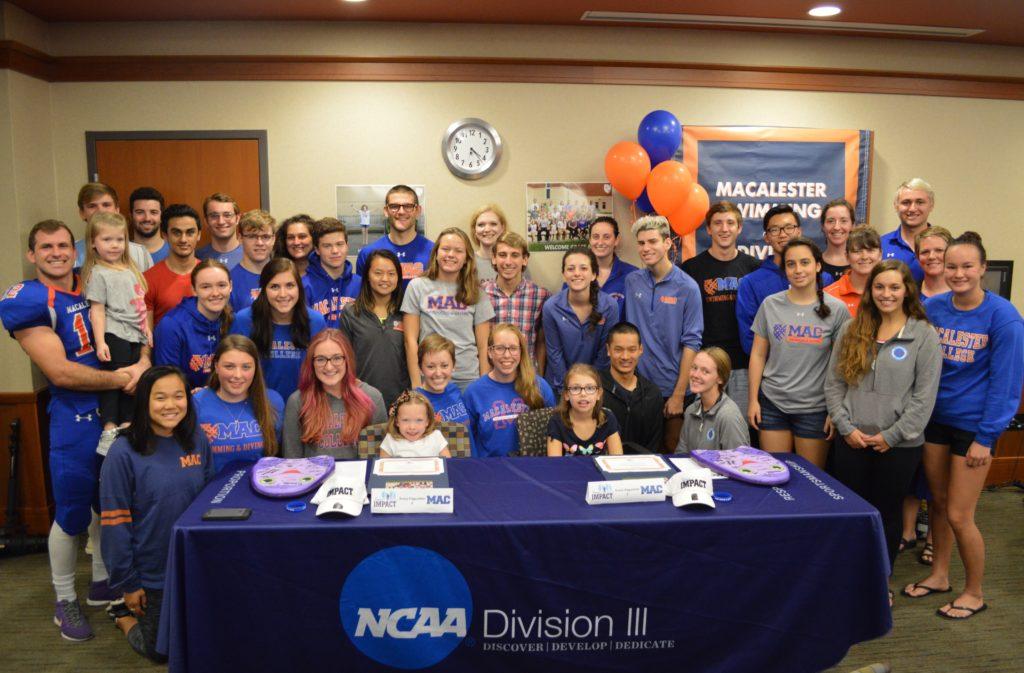 Members of the Macalester athletic community gather together to celebrate and welcome Avery and Grace Dagustino to the swim and dive team. Photo by Rajnee Persaud ’19.

Sam Liberman
Macalester’s swim and dive team just got two members deeper, adding nine-year-old Grace Dagustino and her six-year-old sister Avery. The two girls joined the team through Team IMPACT, an organization that pairs children suffering from chronic illnesses with college sports teams. Team IMPACT has certainly lived up to its namesake, as it has paired over 1,000 kids with 430 different schools in 45 states.

Avery enjoys gymnastics, the color purple and mac-n-cheese. She has Tetralogy of Fallot, a rare heart condition that requires her to visit a cardiologist every six months. Both of the girls’ rare conditions can make everyday life difficult. Since all of the conditions besides arthritis are extremely rare, there is not very much research that has been done on them. Despite all of this, the girls haven’t let their conditions deter them from joining the team.

After spending two amazing weeks with the squad, Grace and Avery were finally drafted onto the team on Saturday, September 24 in the Leonard Center’s Hall of Fame room. In addition to the entire swim and dive team, members of Macalester football were present at the event. Football was the first team at Macalester to become involved with Team IMPACT, having drafted Caleb Maaske three years ago. Caleb and his family were also present in the audience on Saturday to help welcome the Dagustino family to the community.

The event began with a welcome address by Olivia Borgmann ’19 and Mara Halvorson ’17, members of the swim and dive team, who have played important roles in cultivating the team’s relationship with the girls. Then, Kim Chandler, the Macalester athletic director, spoke of how excited Macalester athletics is to have the girls, discussing the success Team IMPACT has had with both football and softball already. Beth Whittle, the head coach, led the presentation of team gear and contracts for the girls’ official inauguration onto the team. Grace and Avery each received a kickboard, signed by the entire team.

The ceremony continued with cake, which afforded the opportunity for members of the audience to mingle with the Dagustino family and get to know the girls a little better. After some group photos were taken, I was able to interview the girls, their mother and team captain Halvorson. The girls are very excited to be part of the team, especially alongside each other. Jocelyn Dagustino, the girls’ mother said that they are from nearby Cottage Grove, 10 miles south of Saint Paul. She also told me that the new partnership is an amazing activity for the girls, and she is excited to get to know each of the girls’ new teammates and see how the girls bond with them. Halvorson is also incredibly excited to have the girls on the team. “They bring a lot of joy to our team; they are the most wonderful girls,” she said. Looking to the future of the partnership, Halvorson said, “I’m really hoping that we’re going to be able to support them and have them support us here.”

After the interviews, the whole team celebrated by jumping into the pool with their two new teammates and splashing around for a while. As Kim Chandler said in her introduction, in partnership with Team IMPACT the swim and dive team along with Avery and Grace are now part of one of the most unique and amazing journeys Macalester athletics has the privilege to be a part of.