Sunday night sounds: an interview with Eros and the Eschaton 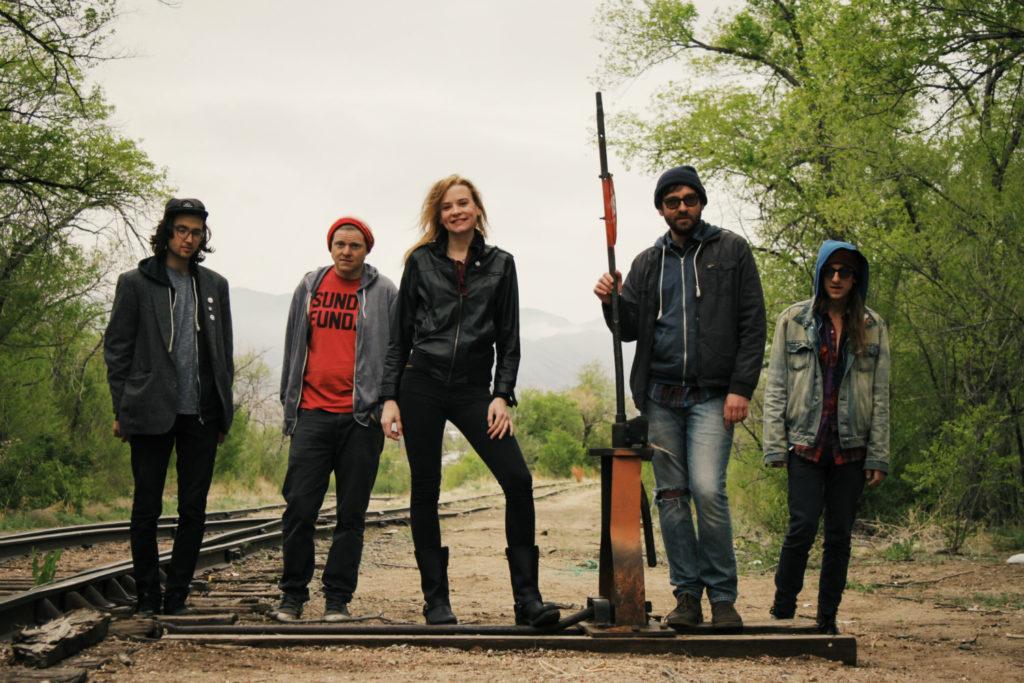 Last Sunday night the sounds of shoegaze pop group Eros and the Eschaton pulsed through the Icehouse in downtown Minneapolis. The blue and red stage lights mixed together to create a purple haze, and Eros took the audience through a psychedelic sonic journey by alternating between tunes with light, dreamy harmonies and beat-driven, guitar-filled anthems.

Eros and the Eschaton are all about journeys. In 2013, Kate Perdoni and Adam Hawkins co-founded the group as a duo in the midst of raising their young son and embarked on an 18-state road trip across the United States. They eventually settled in Greensboro, North Carolina, where they released their first album, Home Address for the Civil War. Since then, Perdoni and Hawkins have once again moved bases to Colorado Springs and expanded Eros and the Eschaton into a five-piece band. I had the pleasure of sitting down with Perdoni and Hawkins, who both sing and play guitar, as well as drummer Alex Koshak and keyboardist Mitch Macura, to talk about their new album, The Weight of Matter.

TMW: What’s the history behind the name Eros and the Eschaton, which is also the title of a lecture by philosopher Terence McKenna?

Kate Perdoni: I got into Terence McKenna around 2008. A guy I was dating was really into him and started giving me all his lectures. I just got hundreds of hours of his lectures on tape and would listen to him all the time. I don’t know, I was experimenting with DMT and hallucinogens, like I have most of my life, and I really liked what he had to say and the way he used them for personal growth and as a window into a larger universe. I’ve always felt kind of anti-authoritarian, and he dissolves societal and cultural boundaries and structures, so his whole philosophy is something I can really get behind.

Adam and I started making music together as the Golden Hearts. That was our first band name and our first choice, but then we got the cease and desist from some fancy Hollywood lawyer shortly after we started recording music under that name. We had to come up with something else pretty quickly, and Eros and the Eschaton is the title of one of my favorite lectures of Terence’s. Terence fits into the proverbial, “if you could have lunch with one person or meet one human past, present, future, who would it be?” He’s my homie in that way. He’s not around anymore, but his contributions to society were much needed.

What inspired you to expand your band from a duo to a five-piece rock band? What are your favorite parts of playing in a bigger group?

Adam Hawkins: A bigger group was always the goal. We were doing the two-piece thing just to be doing something, but liked the idea of growing and trying to add more people, just so we could do more.

Alex Koshak: Yeah, you guys were doing a lot with the two-piece thing.

Mitch Macura: It was ridiculous. I saw them as a three-piece, and they had five keyboards, two guitars, Alex playing drums and tons of Christmas lights wrapped around everything. There were triple-tiered keyboard stands that were jimmy-rigged out of two-by-fours and bad, rusty nails.

AH: There was a lot of barbed wire.

KP: It was like an electrical shack. I do not miss that thing.

AK: I thought you guys just wanted to play guitar and that’s why you asked us to be in the band.

MM: Yeah, both of them actually said that they didn’t want to touch a keyboard ever again.

AH: With fewer people, playing music was more of a step-by-step process. One step led to the next step. Take playing a show: you would have to hit the snare drum and set the drumstick down in a specific spot, hit this other thing and then pick the drumstick back up. You had to go through specific motions in order to make it through the song, and it kind of sucked the fun and fluidity out it. You didn’t enjoy it.

KP: That’s so true. It all had to be premeditated and the same every time.

How has the move from Greensborough to Colorado Springs influenced the new album?

KP: The first record was recorded in multiple spaces but mostly in Greensborough. We also mixed one on the road, and two-and-a-half or three were in Iowa in a motorhome.

MM: And now Adam has a studio called Bright Yo Music that he kickstart-funded a couple years ago. So production experience-wise, space, equipment and attention behind the record has exponentially increased. It’s not as DIY-sounding as the first record. But this is from a relatively outsider perspective; I didn’t have anything to do with the first record. That’s huge I think, having a studio space and the recording equipment that was crowdfunded.

In the single off your new album, “Rxx,” you express a yearning for past periods of rock and roll. Was there any specific motivation in writing it?

KP: When I wrote the song I was yearning for sure. I wrote it when I was about 21, actually here in Minneapolis. I was working at this school of music in Minnesota, and I hated going to school. I’d already dropped out of college two or three times in my life. I watched this Jimi Hendrix documentary on VHS and quit college and went to Georgia, and it was totally a yearning, like, get me the hell out of this boring-ass scape of academia and give me something real. Like, one of these wild and fantastic musical stories, legends that I’d heard of in the past.

Is that shit still happening? Put me there; get me out of here. It was definitely written out of a longing for some other kind of life. But now, 10 years later, it’s definitely more celebratory of all that amazing stuff that took place. It hasn’t gone anywhere, all that stuff is still around— you just have to know where to find it.