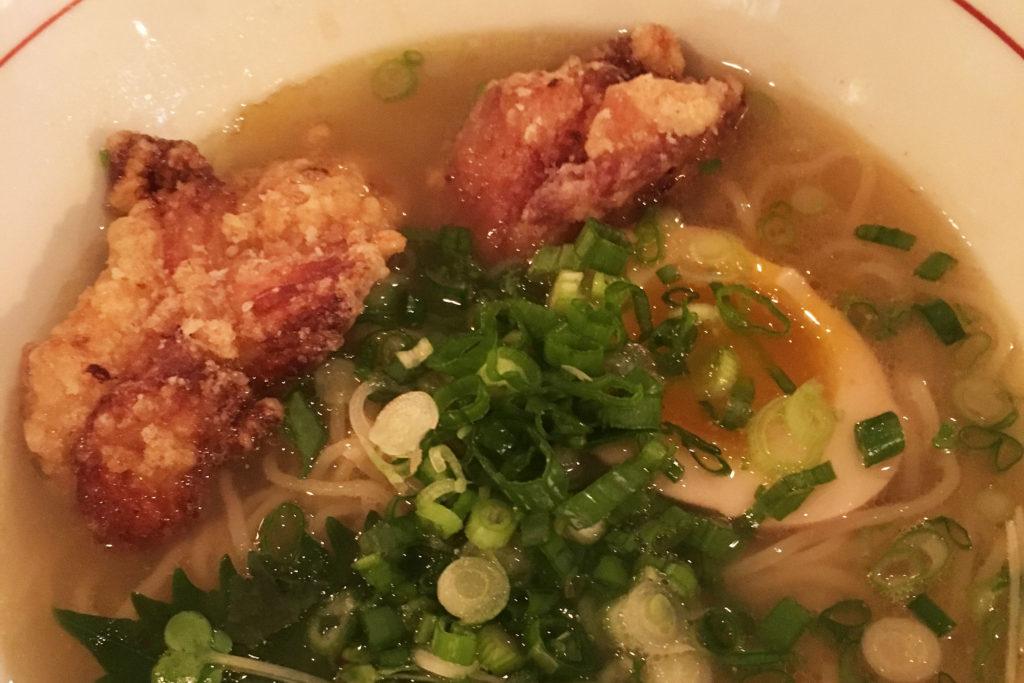 Kate Rhodes
If you are in need of a large, steaming bowl of fresh ramen, you need not look any further. On the corner of Nicollet Ave and West 34th street stands Ramen Kazama, a fantastic new(ish) addition to the Minneapolis food scene. The restaurant, which opened last November, was highly anticipated, and has been living up to the hype. Accepting walk-in seating exclusively and for only parties of four or fewer, at 8 p.m. on a Friday night there was a line to the door, but the service was efficient and we ordered at the counter and were shown to our table within five minutes.

The seating area is open and modern, with one large communal table surrounded by a handful of stand-alone tables. For parties of two, there is the chance to sit at the counter bordering the kitchen, a fantastic experience for those who want to drool over the bubbling pots of ramen and fresh appetizers being prepared at high speeds.
The menu is small, but well thought out, with five different ramen options. They range from the Shoyu “Old School” ramen with consists of pork belly, a boiled egg, dried seaweed, green onion and bamboo shoots in a pork and chicken broth ($9.50) to the Veggie Curry which pairs shiitake mushrooms with carrots, onions, deep-fried tofu, pickled ginger and green onion with a vegan curry broth ($14.00). The menu also includes numerous small appetizer plates, with vegan and gluten-free options available, including pork gyoza ($6.50), japanese fried chicken ($6.50), a spicy cucumber salad ($3.50) and kimchi ($1.50). Rice dishes make up the final part of the menu with both large and small plates of fried rice and rice with curry ranging from $4.50 to $12.00. In terms of drinks, a selection of sakes are available, as are wine, beer and non-alcoholic beverages.

Self-proclaimed ramen fanatics, my friend and I decided to share two bowls of ramen, the Tonkotsu “South Side” ramen ($12.50) and Torishio ramen ($12.50), as well as an order of kimchi ($1.50) and a seaweed cucumber salad dressed in a pork and chicken broth ($3.50). The appetizers came out within minutes and the ramen only shortly after, making for a dinner that was under an hour.

Both ramens were incredible. The Tonkotsu contained two thick slabs of succulent pork belly, a heap of green onion, a perfectly cooked boiled egg, dried seaweed, wood ear mushroom and bamboo shoots. The noodles were perfectly cooked and quite hearty, and the broth was a savory pork bone marrow broth. It was a little oily, so an entire bowl of this broth may be a little overwhelming, but split between two people it was the perfect mix of flavors.

The Torishio ramen was my favorite of the two. It was made up of green onion, a boiled egg, a shiso leaf, radish sprouts and my personal favorite component, fried chicken. The broth was a simple but tasty chicken broth that elevated the flavors of the other subtle ingredients. The noodles were different than those in the Tonkotsu, they were thinner and less hearty, but still quite good. My only complaint regarding this dish was that there were only two pieces of chicken, which while I was skeptical to eat out of a bowl of soup, held its flavor and crisp.

As someone who has not had much kimchi in her life and therefore has little comparison, this kimchi lived up to the expectations of my dinner companion, though was apparently quite spicy. The one let down of the dinner was the seaweed and cucumber salad. Although the broth it was marinating in was good as an individual component, it left the cucumber slices and seaweed strips overly soggy rather than flavorful.

Ramen Kazama also offers numerous toppings at a self-service free of charge. These range from jalapenos to raw crushed garlic and pickled ginger. Each added a great kick to both ramens and elevated the broths to a whole new level.

Overall, Ramen Kazama is a fantastic option for ramen and for a quick mid-priced dinner. It is relatively close to Uptown, and the area of Nicollet Avenue where it is located is also home to Hola Arepa, another great lunch and dinner location. It is not very accessible via public transit, but is a short drive from Saint Paul if you can get hold of a car or are willing to spend $10.00-$15.00 on an Uber.