Grub on the Green Line: Ethiopian restaurant Fasika is a big hit 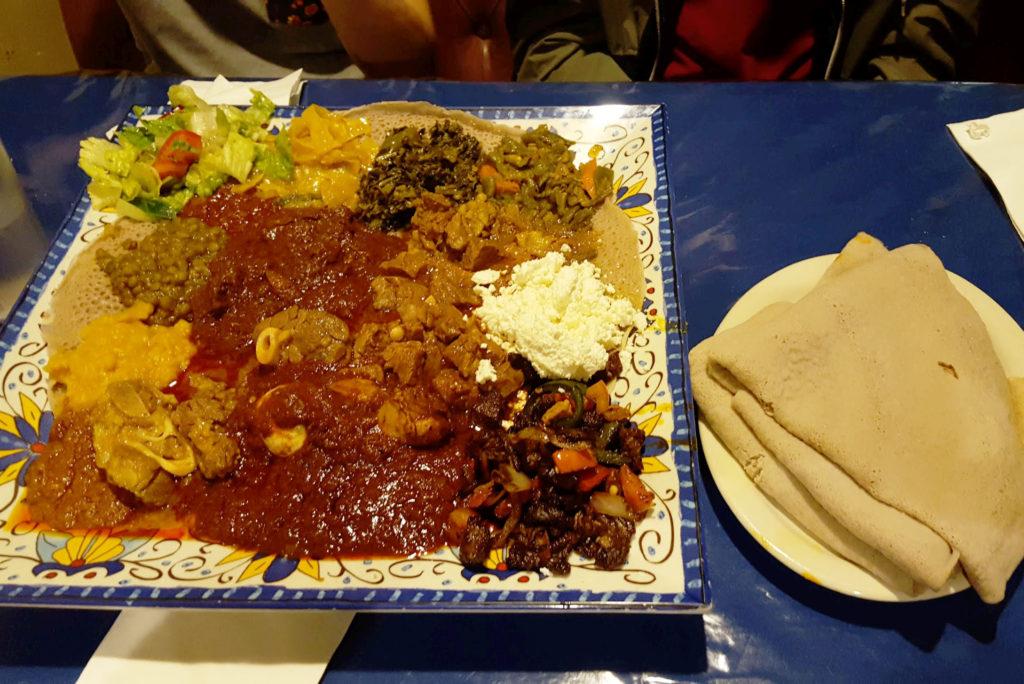 Fasika offers the “Ultimate” plate, a mix of meats and vegetables served on injera. Photo by Henry Nieberg ’19.

Grub on the Green Line is the Mac Weekly’s attempt to create a comprehensive understanding of all the restaurants located just a bus ride (and a light rail ride) away. Check back each week to find your next weekend must-try.

Every student at Macalester has probably heard of Fasika. While I’m sure a bunch of foodies at Mac have tried Fasika, the majority of students haven’t, and this is a problem. Given that it’s right off the A Line and is just one block away from the Green Line light rail, I was able to get there from Macalester in a little under 10 minutes. Considering how close it is, Fasika is definitely a restaurant for Macalester students to try.
For $40, three friends and I ordered the “Ultimate” plate, which offered a variety of vegetable and meat dishes—can’t forget the injera, a spongy Ethiopian bread. There were plenty of options of meat, including chicken, beef and even lamb. Non-meat dishes had even more variety, including several different types of spiced platters with split peas, lentils, green beans and even a home-made salad.

Two of my friends who came had never tried Ethiopian food before, let alone eaten at Fasika. They were intimidated to use their hands to eat, and thought that we were ordering too much. However, the flavors, which might be unfamiliar to the American palate, were easy to swallow, and by the end of the night, the huge dish was almost licked clean. My one critique of the restaurant would probably be that the food could use a little more spice. While the restaurant did offer its own homemade Berbere seasoning — a mixture of paprika, ginger, onion powder, local powders and other spices — don’t expect the food to be spicy, for better or worse. I went in with the expectation that it would be incredibly spicy, and even though I was a little disappointed that there wasn’t a lot of spiciness, the flavors were still unique and likeable.

The service was nice overall, and while it took a while for the waitress to refill my water, the food itself came incredibly quickly considering the amount of food we ordered. In terms of a relatively cheap and fast meal, I definitely recommend Fasika. It’s open relatively late for the Twin Cities (midnight), and with the new A Line, it’s accessible in a matter of minutes.

Even though the food might come swiftly, there is no pressure to leave, and you don’t have to be dressed formally to go. As a matter of fact, part of Ethiopian culture encourages you to relax and actually get a cup of coffee after dinner. While I had anticipated more spice, if you’re willing to pitch in $10 with a couple of friends, it could be better than a night at Café Mac.

Fasika is located at 510 Snelling Ave N, St. Paul (at the corner of Snelling Ave. and University Ave.).