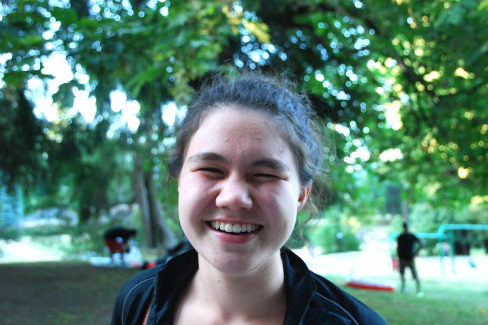 Each week The Mac Weekly speaks with a DJ on Macalester’s radio station, 91.7 WMCN. This week we sat down with Natalie Hoffman ’19 to talk about her show.

TMW: What is your radio show called, and do you have a general theme for the music that you play?

Natalie Hoffman: My radio show is called “Mermaid Hair Don’t Care,” mainly because I’ve got some pretty crazy hair and I saw that on a t-shirt once and it really stuck. I mostly play indie, alternative rock and occasionally I’ll have a special guest come and play something unique. One time we played some dance music (that was fun), but for the most part it’s all about music discovery. That’s why I always say the names of the albums and the artists that I’m playing and, if I have time, I’ll look up if there are any new shows nearby coming up.

Why did you first apply to be a DJ?

After my first semester of last year, I saw the DJ application on the Daily Piper. I immediately wanted to apply because, back at home, there’s this one radio station called KEXP and its DJs are awesome. I just discover so much music from them, and I just love music in general. I thought that this would be the perfect opportunity for me to do something that I really love, and college is a space for that kind of exploration … It was definitely one of the most fun things that I did all year.

How do you create a playlist for each radio show? Do you have a theme for each playlist, or do you put them together more spontaneously?

I created one master playlist of all the songs I love that I thought I would play on my show. Sometimes I’ll scroll through it and I’ll add some songs. I just try to play the best songs that I can play that I think people will enjoy … When I’m making a playlist I definitely try to blend the songs together so that the tune and speed of the end of a song will move into the next song. So I wouldn’t play a crazy dance song right after a smooth, acoustic jazz song.

Over the past year, and perhaps over the course of your life, has your taste in music evolved? If so, does this reflect in your DJ show?

My taste is probably the same, as I mostly really love the same kind of genre—songs that fall into the ‘alternative, indie rock’ category, as well as pretty funny dance pop. Those two are kind of my things, but on my radio show I mostly play the former. On my last show of last year, I played the top 10 songs that I had discovered by having this DJ gig. After I became a DJ, I started looking and looking for new music, more than I ever had before; there was suddenly this fire in me. The number one song I played that I really loved, [called “Love Is,” by the band Dude York], I actually went and saw live this summer, and I was singing along, and afterwards I talked to the writer of the song. This whole DJ thing has allowed me to experience all these new, fun, awesome things that I never would have had the opportunity to experience.

What musical artist has inspired you most recently?

The first one is the Wombats. They came to a music festival in Seattle. I did not go to that music festival (my brother did, it’s called Summer Camp), but I really like them. The second one is this little indie band called Walty Mitty and His Makeshift Orchestra, and it’s angsty, acoustic music­—very different from the Wombats, who are very clean and perfected (also angsty), but both those bands are awesome.