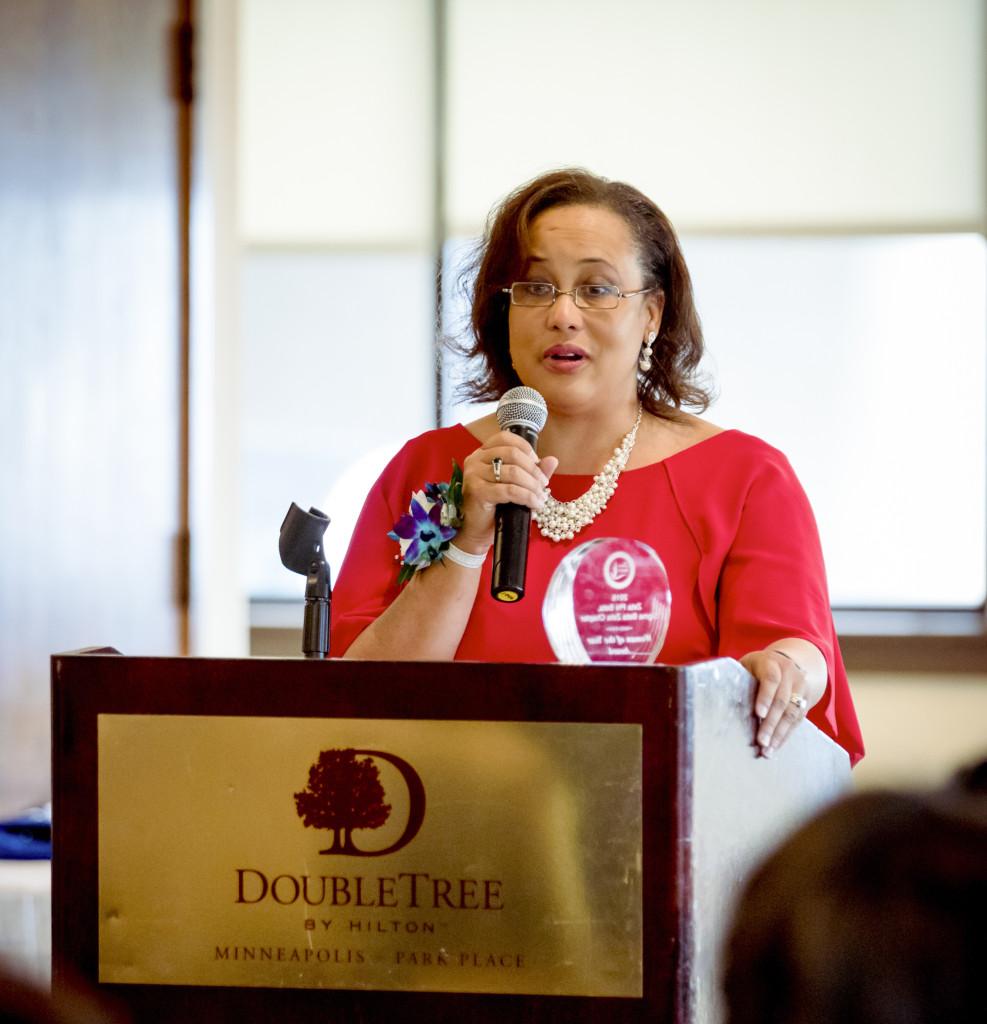 Professor Duchess Harris received the Woman of the Year award from the Zeta Phi Beta Sorority, Incorporated at the Double Tree Inn on Saturday, March 26. Photo courtesy of Ian Daily.

Editor’s Note: A previous version of this article misstated the date of Harris’ arrival at Macalester. Harris first arrived in 1994, not 1998 as was previously written.

On Saturday March 26, Duchess Harris, a professor in the American Studies department, received the Woman of the Year award from the Zeta Phi Beta Sorority, Incorporated. This sorority is a public service organization that originated from Howard University since 1920 and is in universities across the United States and internationally, such as in Asia and Africa. Harris is not a member of the sorority but has been recognized for this internationally acclaimed title for her presence in the Twin Cities and its African American community.

Harris came to Macalester in 1994 while she was working towards a graduate degree at the University of Minnesota. For the first three years, she taught as a part-time teacher and was offered a tenure track position her fourth year, in 1998. She signed her tenure-track contract at 28 years of age and has now been a part of the Macalester community for 21 years.

This semester, Harris is teaching several classes, including “Explorations of Race and Racism” and “Black Public Intellectuals.” In her classes, she discusses different identities and how they are perceived historically and in today’s community. She also discusses with her students what it means for one to take a public space and how to deal with the public responding to what is being said.

Since 2009, Harris has published three books. She co-authored her first book “Racially Writing the Republic: Racists, Race Rebels, and Transformations of American Identity” (2009) with Bruce D. Baum of the Duke University Press. In subsequent years, she released her two-part Black Feminist Politics series. The two editions of this series, “Black Feminist Politics from Kennedy to Clinton” (2009) and “Black Feminist Politics from Kennedy to Obama” (2011), focused on the participation of Black women in the Democratic Party, both within and outside of electoral mainstream politics. In this series, she discusses the hardships of Black women in terms of making gains within the Democratic Party and how this has led Black women to organize outside of electoral politics.

Her third book, “Black Lives Matter” was released just October of last year and is now used as a textbook in many high schools and colleges. With a publishing company based in Minnesota, Abdo Publishing, Harris began working on this book as a content consultant. However, as she was able to greatly contribute to the book and build upon its historical framework, she was made co-author with Sue Bradford Edwards.

Between writing her scholarship and teaching at Macalester, Harris has also published many articles as part of her post-tenure research. Her most personal and renowned research project was inspired by her late grandmother, Miriam Daniel Mann. During the 2013-14 school year, she investigated the segregation of Black women in NASA, specifically during the 1940s, the timeframe in which her grandmother worked in the industry. Harris is basing her fourth book on this research project and will again be working with Sue Bradford Edwards. She hopes to release the book in 2017.

The following is a conversation with Harris.

How have you brought movements to Macalester?

I don’t see that as my role. In an undergraduate institution, it’s my opinion the students should lead. It was the students’ programming board, their lecture series, that came up with the idea of bringing Janaya Khan. They asked me to be the person that would ask her questions up on stage. So it was really a student generated activity, which most social movements are.

Could you say a little bit about the Zeta Phi Beta award?

I was deeply flattered when they chose me to be Woman of the Year, and it was a beautiful ceremony. It meant a lot because I want to show the next generation of scholars the importance of having a space in the academy in this academic world where you read a lot of books, you write a lot of books, but also to step away from the academic gown and to walk into town and do stuff with Black people who live in the Twin Cities.

One of my students is the daughter of a friend, so I’ve gone from being only four years older than the seniors to now being old enough to be the mom of a student. My oldest kid is in the 11th grade, so two years from now, I actually will be in a position where I will have a college-aged child, so it’s been the circle of life being at Macalester. I’m going to retire when the first child of one of my students ends up coming.

Why did you want to be a teacher?

I’m deeply invested in writing the narrative of Black women into United States history. Black women have only been in syllabi on college campuses since the ’80s.

The first course taught by a Black women at a college about Black women was in ’82 at Wesleyan, so it’s only been 30 years. I actually went to college in ’87 and I was at the beginning of the “If you were a Black American woman, you could learn about yourself in college.” I’m the youngest of my family, so my two older siblings would not have had that opportunity.

So what I chose to do for a living was basically to write and teach and insert how I see my history into the curriculum so it could be there for everyone. And that’s pretty much why I chose to become a teacher.