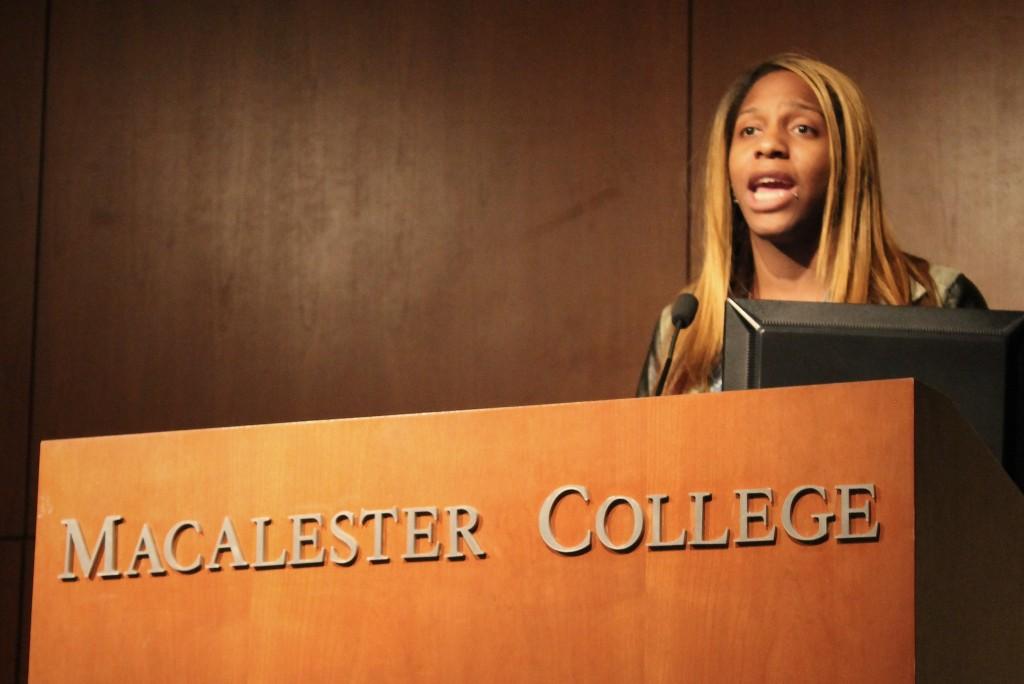 On a June night in 2011 in Minneapolis, CeCe McDonald fatally stabbed a man who was attempting to assault her and her friends. Since then, the Black trans activist’s journey has taken her from the courtrooms and prisons of Minnesota to the cover of Rolling Stone ­— and on Friday, April 1, the stage of JBD as the most recent speaker in the Department of Multicultural Life’s SPEAK! Series.

McDonald’s talk started with a trailer for the upcoming “Free CeCe” documentary, a shared project of McDonald’s and trans actress from Orange is the New Black Laverne Cox. The trailer introduced the small audience to McDonald’s story, her experience with incarceration following her decision to take a plea deal and the ways in which McDonald’s experience may reflect the experiences of trans women, particularly trans women of color, nationwide who experience violence.

“CeCe’s case, to me, encapsulates so many of the harsh injustices that trans women of color face in this country,” Cox said in the trailer. “Her story touches me so much because I have been CeCe. I have been walking down the street just minding my own business. And so often when trans women are attacked in these situations they don’t survive. But CeCe did survive and her gift for surviving is a prison sentence, when she was just defending herself.”

Following the trailer and an introduction by Max Guttman ’16, McDonald took the stage. She discussed the importance of opening the event with the trailer.

“I love this film because it gives people an opportunity to see trans people outside of a cliche or stereotype,” McDonald said. “You get to just see me as a human being. And I feel like for a lot of trans folk, our humanity has been detached away from us, and so people only see us through stereotypes or through the imagery that is portrayed in media. And we never actually have a voice for ourselves, so this is a good opportunity for people to see the different, multi-faceted, multi-complexed type of person that I am, and give people the perspective of trans identities and kind of move them away from stereotypes of trans bodies.”

McDonald then gave herself an introduction.

“I tend to be the voice for the voiceless,” she said. “I’m very blunt and honest. I have no filter. I have a really bad potty-mouth. I say it how I mean it, and I mean what I say.”

McDonald’s bluntness was ever present throughout the talk. She unapologetically called it like she saw it on the subject of Caitlin Jenner, Donald Trump, privilege, sexism, racism and transphobia in the LGBTQIA community.

Students who attended the event said they loved McDonald’s directness.

“I loved how blunt CeCe was,” Hannah Mangas ’18 wrote in an email. “She didn’t seem to care about sugarcoating anything she said about racism and transmisogyny, and she made it clear that she wasn’t going to waste time patting allies on the back or making her words and actions attractive to her oppressors. It was refreshing to hear her talk that way as someone who often feels that I have to talk about the various forms of oppression that I face in the most watered down way possible for the sake of those who contribute to my marginalization.”

McDonald spent a majority of the talk discussing the issues surrounding the prison-industrial complex.

“People always say that it’s flawed, that the system is messed up, that we need better this or that,” McDonald said. “No, the system is created to do exactly what it’s doing: target marginalized communities, impoverished communities, communities of color, LGBTQIA communities, and to disenfranchise those people and keep them away from the people who are really being protected: the rich and White.”

While she said that she recognizes injustices wherever they are, prison abolition is her central focus. That’s not to say McDonald didn’t discuss other issues. During the Q and A session following her speech, she talked a lot about allyship and activism.

“More people are asking about how to be a better ally and how to understand these issues,” McDonald said. “But I feel like it’s for a lot of people, especially White, cisgendered folk, who take it upon themselves to be a part of every movement, and it’s like sometimes you need to fall back … Taking pictures and posting them to social media, people feel like they did something. But it’s like that’s not where allyship lies and that’s not where it ends. There’s more to allyship that taking Facebook photos and bringing cookies to the meeting. You have to be a risk taker.”

Ben Kromash ’16, an American studies major who is writing his capstone about Martin Luther King Jr., Malcolm X and Black Lives Matter, attended the talk. One of his favorite moments was when CeCe talked about finding her place in movements.
“My favorite part of the talk was that she did not try to put herself on a pedestal,” Kromash wrote in an email. “She is incredibly selfless and recognizes the powerful organizers who have come before her to make her activism possible … By not asking to be put into the spotlight, CeCe is spreading power horizontally rather than creating a hierarchical power structure.”

While McDonald emphasized that she was “just one speck of sand within the larger community,” students said that McDonald’s presence on campus was important to improving the discussion of trans issues on campus.

“To be honest, I think trans issues tend to be pretty poorly received at Mac, and I think the relatively small size of the audience at CeCe’s talk speaks to how little cis people on campus really care about hearing what trans people have to say (particularly trans women),” Mangas wrote. “For the most part, cis people at Mac seem unwilling to educate themselves about trans issues and are really only open to learning if trans people put themselves out there and walk our cis peers through the issues we face in a slow, overly gentle way that waters down trans issues to make them as palatable as possible.”