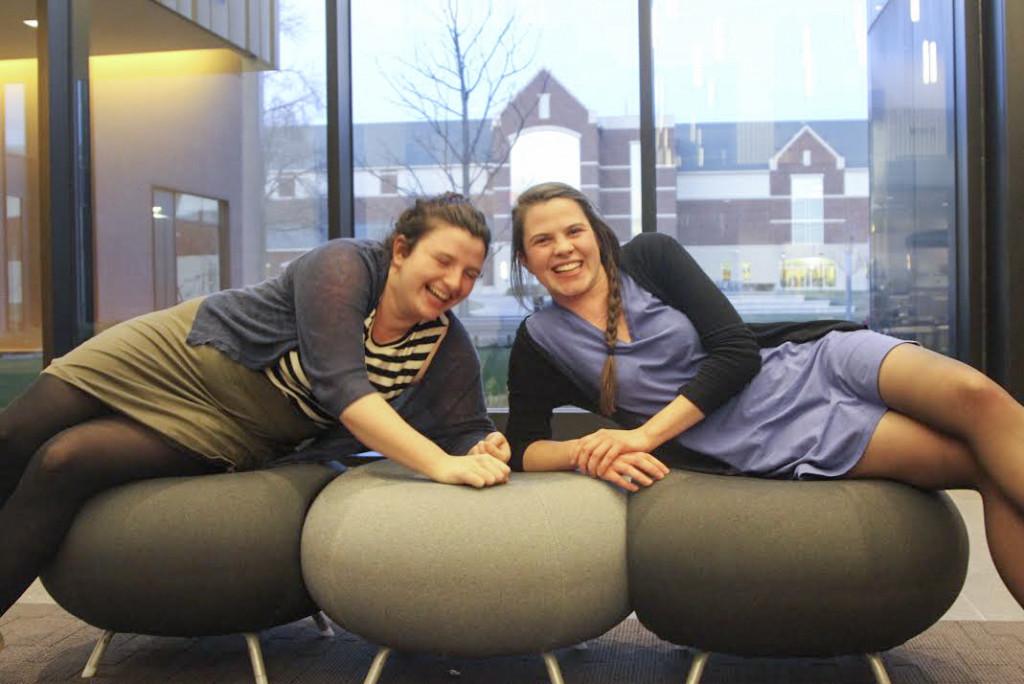 Emma Soglin on left, Emma Andelson on right. Andelson and Soglin are the hosts of “Las Emmitas" on 91.7 WMCM. Their show is every Monday from 8 to 9 p.m. Photo courtesy of Henry Nieberg.

Each week The Mac Weekly speaks with a DJ on Macalester’s radio station, 91.7 WMCN. This week we sat down with Emma Andelson ’16 and Emma Soglin ’16 about their show, “Las Emmitas.” Tune in every Monday from 8 to 9 p.m.

TMW: What is your show and what can a listener expect when tuning in?

Emma Andelson: … because both our names are Emma.

EA: This is our third semester in a row on the air, so we’re legends, really. We try to do music in Spanish. Basically, a lot of styles. Both of us studied abroad in Spanish speaking countries, but we were interested in stuff before, like most of my family is from South America so I have some personal connections. We do a lot of stuff like regatons — stuff you’d hear in clubs — folk music, dance music like Salsa, Merengue, etc.

How do you select your music?

EA: A lot of it will start with artists that we know, and once we’ve exhausted our favorite songs of theirs we’ll start listening to their other stuff and listen to older and newer stuff. My mom is a musician and plays a lot of Colombian music.

ES: When I studied abroad, I took a class on masculinity in Latin American pop music, so I had to listen to a lot of this kind of music through an academic lense.
Both: Oh, wow … this sounds pretentious, oops. Can we edit this out? [laughs]

What do you try to accomplish with your radio show?

EA: Half of it is entertainment. We want people to enjoy the songs and don’t want them to sit being bored on the other end. But also every now and then we like talking about what’s special about the music or artist.

ES: I think my goal with the radio show is always to show a variety of genres — to show that Spanish music is so varied, just like American music.

If a listener tuned in at random, what would they hear?

EA: We always start and end with a club song, just to pump ourselves up. So I guess today we’re playing club, a couple indie, old folk songs, pop and pop-rocks?

EA: We’re being serious now but there’s always a chance that we’ll be goofy or say where someone’s from, but really we just make it up. Sometimes we get corrected by my mom.

What was the last song you listened to? Does this represent the music you listen to/play on the radio?

ES: Our main goal when we play music is for us to have fun, so we try to know most of the words for the songs we play so we can dance in the studio. We try to make a playlist and then run through it right before the show.

EA: When I look at my Spotify now, 80-90 percent of the recommended music is some kind of Spanish-speaking music, because I guess that’s what I’m trying to learn about