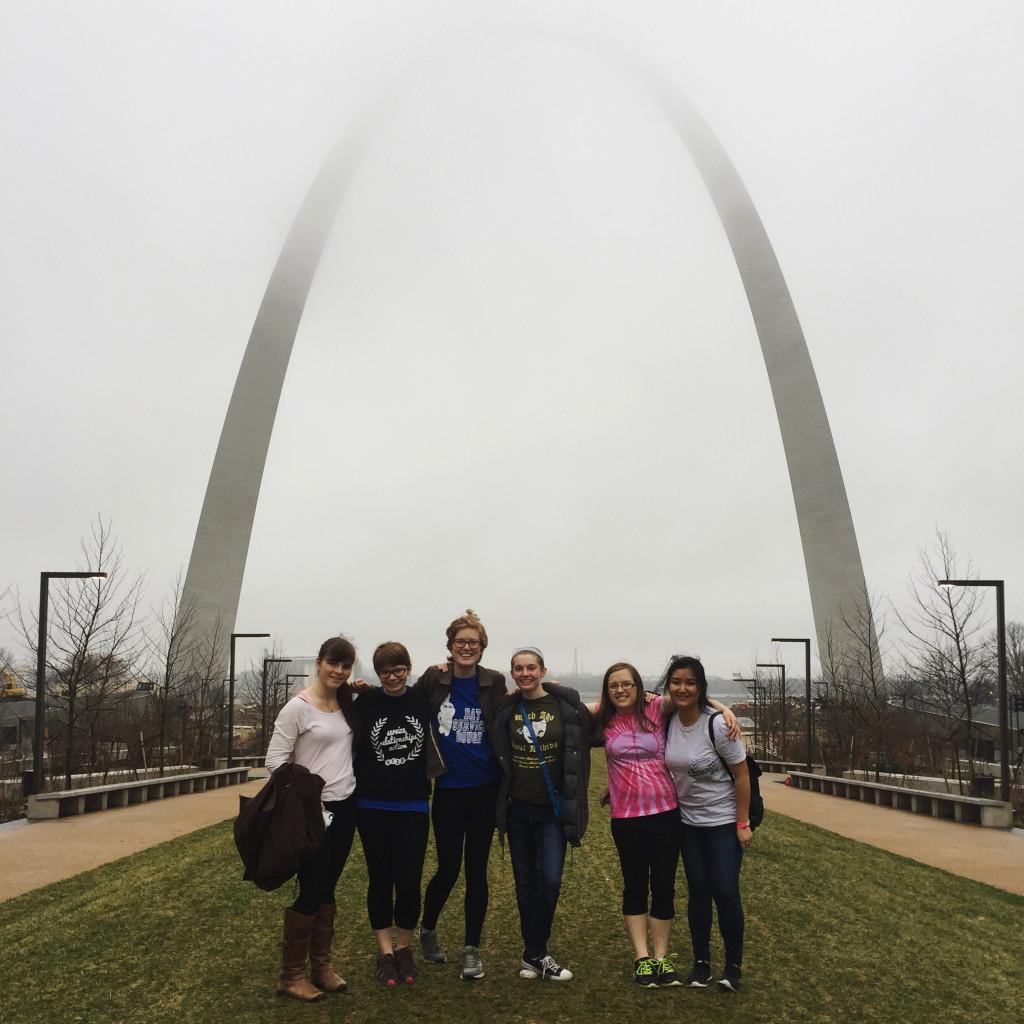 The Macalester students at the Gateway Arch in St. Louis. Photo courtesy of Hannah Mangas ’18.

Over spring break, a group of six Macalester students headed to warmer weather and participated in various service projects in multiple states with the group Students Today Leaders Forever (STLF). The trip, affectionately termed the “Jackson Five” included stops in Jacksonville, IL; Jacksonville, MS; Jacksonville, TN; Jacksonville, MO; Jacksonville, LA and Pensacola, FL. The leaders of the group, Hannah Mangas ’18 and Anna Steele ’18, shared background and their experiences while on the trip.

STLF started at the University of Minnesota Twin Cities and since its beginning in 2003 has grown dramatically. Magnas stated that STLF is meant to “reveal leadership through service, relationships and action” through the short but impactful service projects they carry out with varied local organizations. Although the organization did not originally have a chapter at Macalester, Mangas and Steele successfully brought it here.

The trip focused heavily on the service provided to the local organizations.

Mangas commented that “The main thing we try and be conscious of in trying to find service work is that we want to find what they need. We don’t just want to come in and assume that they want our help. It’s really about reaching out to local organizations and figuring out where we can do real help.”

The goal of the trip was to provide help where it was wanted and not to impose it upon the communities. The service projects are a broad spectrum of activities. With such a wide variety of projects, the participants often are not told what they will be participating in that day.

“It’s fun not knowing because we tell [the participants] the day of where we’re going,” Steele commented, describing the routine of the ever-changing locations and service projects.

However the group also helped clean a park, cooked, cleaned and provided company for those in an assisted living, sorted and packaged food, acted as classroom aids and helped clean up the Gulf Island National Seashore in Pensacola, FL. While in Pensacola, Mangas recalled, “one of the workers from the (apparently very understaffed) National Park Service mentioned that in three hours, we’d done work that otherwise would have taken them two months to finish. For me, that was really a big moment of accomplishment. It’s easy to feel like a few hours of your life spent sorting and packing clothes at a food pantry or washing windows at an assisted living facility doesn’t make a huge difference, but hearing from people who live and work in the communities we’re serving about the tangible differences we’re making really helps it sink in that the work we’re doing matters.”

While the physically-demanding service projects were a big part of the trip, the group also spent time interacting with the community, which stuck out as a highlight to Mangas. “We spent a morning at the local elementary school. Eating breakfast with a couple hundred screaming children after only a few hours of sleep on a church floor was a little bit intimidating, but honestly, it was one of the coolest parts of the trip. The kids were so amazed by how far we’d traveled, and they couldn’t believe that ‘adults’ like us were still in school just like them.” During that time the group interacted with the kids, teaching them various road trip songs and playing with them. Mangas confessed, “Leaving the school breakfast to go pick up sticks at a local historical site was rough — I easily could have spent the whole day trading stories of college life for schoolyard gossip and dreams of growing up to be scientists and teachers and the President.” The kids’ enthusiasm had left the group feeling refreshed.

For those interested in participating next spring break, Mangas advises: “Know that whatever expectations you have getting on the bus on day one aren’t going come close to capturing to next nine days of your life. Be ready for surprises, good and bad, and the biggest whirlwind of a spring break you could possibly have.” Although many students see it as solely a service group, Mangas explained that, while they do get that aspect, “there’s nothing that could have prepared me for the tears and laughter and existential crises and connections (with other students and the most unsuspecting community members) that make STLF what it is.”

On what makes the trip so important, Mangas said, “I think a lot of the tours’ value lies in the fact that it’s leadership for the people who aren’t recognized as leaders. It’s definitely shown me, as a quiet, socially anxious person who constantly doubts themself, that I’m capable of inspiring change and making a difference in the lives of individuals and entire communities.”