Foxing and the albatross take flight 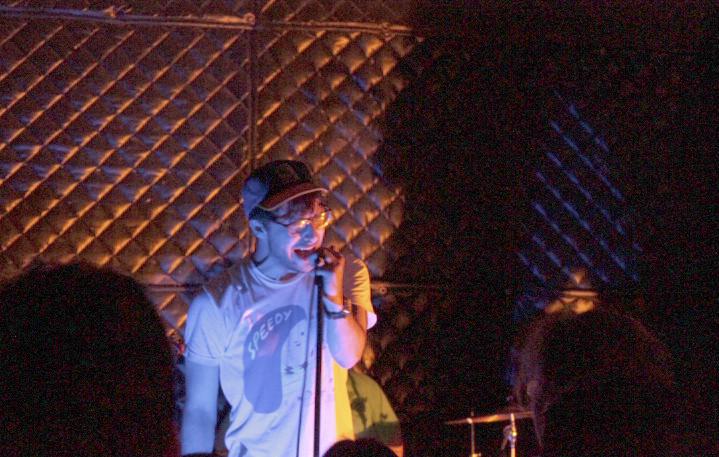 Lead singer Conor Murphy rocks out at the Triple Rock Social Club. Murphy is a member of Foxing an indie-rock, post-rock group. Photo by Julia Fritz-Endres.

“Foxing is a band. Someday Foxing won’t be a band.”

This slogan is both simple and profound, although you may think it clichéd of an indie-rock, post-rock group to declare itself metaphysically impermanent. Hold your judgement for just a moment. Imagine that you are standing in the Triple Rock Social Club, swaying back and forth to the crooning voice of Conor Murphy, the 21-year-old lead singer of the band. The crowd is filled with college-age students who listen intently; looks of pleasure and sadness play over their faces as the lyrics carry them through a haunting story of love and loss.

“The Medic,” a song from their first album, draws you onto the dance floor, where you shout the words “because I want to be loved” alongside dozens of others who have found solace in Foxing’s honesty. Murphy’s voice is as raw as his lyrics during these moments, and he adds more gravel to his tone with each song’s climax. Josh Coll and Ricky Sampson play off one another, occasionally turning their backs on the audience to strum guitars mere inches apart. Eric Hudson stands in a dark corner on the other side of the stage, pulling his hoodie drawstrings tight over his head. The entire band gives off an air of troubled introversion, each member somewhat closed off, yet screaming to be heard. Although a wall of sound separates you from the players, their guitar licks and drum-set rim shots reverberate through your whole body. You might need a hearing aid a few years sooner after seeing this concert — but you don’t give that an ounce of thought. It is worth getting to empathize with the pain of Murphy’s adolescence.

In an interview with Murphy after the show, I ask him how he writes personal lyrics others can relate to. He responds that he has “always tried to stick by a mantra of trying to write as honestly as [he] can.” Even though this honesty is “a little weird and scary” for him, it allows him to access beautiful lyrics that resound with his fans. Murphy describes how members of Foxing use this personal content to become closer with one another and to improve as a band.

Conor Murphy: Through our first album, we were loose with actual honesty and lyrical content, more true to themes … But for the second one, Dealer, we tried to focus more on things that kind of haunt us, and we tried to … exploit them a little bit. That sounds kind of fucked up. [both laugh] There was a day of a tour when I told Josh what I wanted to write about, and it was the first time I told anybody since I was 15 … I think everyone has the[se] dark moments of their life, [and] to write about that is painful and shitty, but it’s also … cathartic … It’s like writing a diary where, once it’s written out, you feel like it’s separate from you … So it’s good to just push that shit out instead of keeping it inside.

As you can imagine, the experience of playing these songs is deeply emotional. The other members support Murphy through each song, following him from one musical paradigm to the next. Many songs begin with soft accompaniment alongside Murphy’s vocals, and then quickly swell towards a theme. These themes are based in memories of rejection, loss of virginity and failed love. Murphy admits that, in performance, he revisits these dark moments from his past.

CM: Sometimes … we’ll smoke weed before a set and I’ll just feel like I’m right there, 15 years old, and being in that moment. It’s horrible, but at the same time I think that makes for a better thing to watch … [With] any band that writes honestly and emotionally, it’s really awesome to see them, but then there are some times when you can feel when somebody is living that moment again, and to me it’s always hard to watch, and you kind of cringe about it, but you still walk away feeling really good … For us, once the song is over, it’s like, now I just fast-forwarded 15 years.

Murphy’s songs are full of recurrent, secret meanings from his past. I was curious about one symbol in particular, the “albatross,” which appears in several songs and serves as the title of Foxing’s first album. He smiles when I mentioned this, and goes on to describe Samuel Coleridge’s poem “The Rime of the Ancient Mariner.” Fleetwood Mac (which he admits is one of his favorite bands) use “Albatross” as a song title in their album The Pious Bird of Good Omen. To Murphy, the repetitive use of this reference comes as no surprise.

CM: The reason why is because it’s a symbol of bearing a curse that was brought on by yourself, and I think that’s a thing that a lot of people, a lot of bands especially relate to … and we’re not above taking that same idea … because it’s a universal feeling. Everybody’s gone through something where it’s their own fault that they have bad luck, and to blame fate or luck is crazy. It’s like what the albatross represents: bad luck that you bring on. So yeah, we kind of stick to that symbol a lot because … it’s a self-perpetuating fate.

I admire that Foxing can embrace feelings of guilt and lust and pain, which many find uncomfortable to discuss. Murphy just laughs, saying “we’re definitely scared of it.” Jokingly, he adds, “it’s the same reason why we drive overnight all the time, we’re masochistic people.” The term ‘emo’ has negative connotations that Murphy and the band want to avoid, so they resist when people try to define their style as ‘emo rock.’ Yet he can’t help making fun of that label from time to time. Because the band is about much more than pain. Foxing is not just an outlet for the band members’ painful memories. Foxing is also a mode of therapy for those who see themselves in its music.