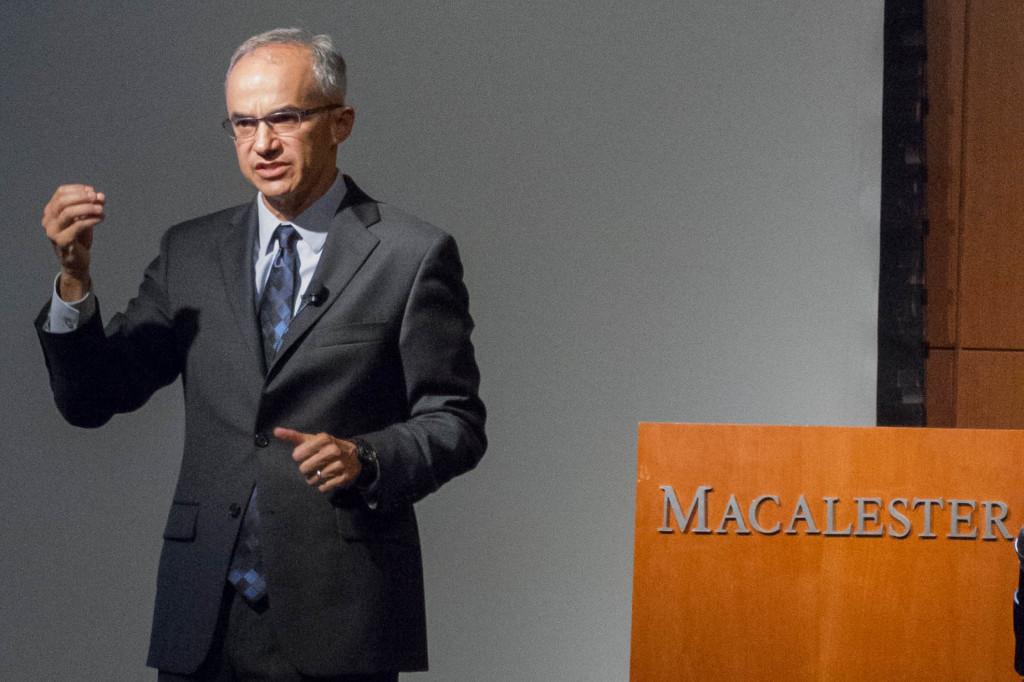 Ian Haney López, a professor of race and consitutional law at the University of California at Berkeley, addresses a full crowd in the John B. Davis Lecture Hall. Haney López used a historical look to analyze how politicians use coded racist rehtoric to play on white American anxiety. Photo by Noah Zwiefel ’19.

On the evening of Monday, Feb. 29, Ian Haney López gave this year’s Mitau Lecture in John B. Davis Lecture Hall. Haney López is a professor of race and constitutional law at the University of California at Berkeley and the author of Dog Whistle Politics: How Coded Racial Appeals Have Reinvented Racism and Wrecked the Middle Class. His speech, titled “Trumpeting Racism: Race, Politics, and Economic Jeopardy for All,” emphasized the use of race as a coded political weapon for American presidential candidates over the last fifty years.

The Mitau Lecture is given annually. It was instituted and funded by the family of Macalester political science professor Theodore Mitau ’40, after his death in 1979. Haney López was chosen by this year’s Mitau Lecture committee, which included Professor Paul Dosh as well as Dilreet Dhaliwal ’16 and Rose Allen ’16, both of whom are political science majors. Of all the potential speakers they considered, Haney López was chosen based on his published writing, videos of his presentations and “the crucial relevance of his ideas in 2015-16,” Dosh said.

The speech, which was an hour and a half long, began with a discussion of contemporary “demagogic” political discourse focused particularly on the case of the current Republican presidential candidates.

Haney López cited Donald Trump, who has brushed off and even encouraged violence against those who have opposed his campaign and protested at his rallies.

“This is a candidate for president who is essentially endorsing a form of vigilantism that invites a level of violence in his followers, but [who] really communicates a deep disrespect for democracy and for dissent,” he said. “We need to take seriously the idea of a Mitau Lecture rooted in the fact that sophisticated societies can veer out of control. And that has to be the cautionary tale for all of us, as dark and as disconcerting as that is.”

Haney López also discussed the history of coded, implicitly racist rhetoric, which he said has been present in American politics for at least the last fifty years. Candidates have benefited most, Haney López said, since the election of Richard Nixon, when they began seizing on the white vote by implicitly stirring up racial anxiety. Since then, the white vote has consistently been won by candidates who participated in forms of “race-baiting,” which include terms and phrases such as “welfare queen,” “law and order,” getting “tough on crime,” “illegal alien” and “terrorist.”

Haney López says these terms are a form of “dog whistle politics”: they are not explicitly heard or understood by everyone, but their coded meanings incite support from conservative white voters.

Haney López includes the Clintons in the list of candidates who have profited from racism, saying that Bill Clinton had to “walk away from liberalism” to win the presidency. Haney López said that, upon entering office, Clinton “trashed the social safety net” and “contributed to mass incarceration.”

When asked about his predictions about who will win the nomination, Haney López said that he believes the election will ultimately be between Clinton and Trump. He also said he believes that Sanders would be slightly more likely to beat Trump in the general election, and is “guardedly skeptical” about Clinton.

“I think Clinton has no clear model for actual political change, whereas Bernie Sanders understands what’s [going to] be required in order for us to break out of the paralysis of the moment,” Haney López said. “If Clinton wins the presidency, she will be immediately confronted by a hostile obstructionist Congress. And she will find herself completely paralyzed and unable to move. It’s likely that Sanders would be similarly so confronted, but the difference is, Sanders understands that that’s what’s likely, and realizes that he must dedicate himself to a perpetual campaign to create broad mobilization in the American public.”

Nonetheless, López said he believes that Sanders’ primary emphasis on economic and class reform will not address racial issues in their entirety.

Sanders, López said, is “missing an important part of the analysis, which was that, rather than race being something that could be solved after we got our country back, we all need to deal with race in order to get our country back.” He also includes gender, sexual orientation, ability, religion and immigrant status in this reclamation.

Haney López also stated his belief that, while previous presidential candidates have used “whistle-blowing” carefully so as to hide racial references from liberal critics or their main audiences, Trump has benefited from the attention of liberal critics.

“Many whites have come to understand accusations of racism as itself a form of racism against whites,” Haney López said. “So when people react to Donald Trump — when the New York Times or the Washington Post reacts to Donald Trump by saying, ‘You’re engaged in xenophobic pandering,’ as the Washington Post has — Donald Trump can hold it up and say, ‘I don’t have a racist bone in my body. Never said anything racist, and you are the ones who are racist, attacking me.’”

Haney López concluded his speech by calling for a progressive movement, which he also divided into three series of actions: speaking out against racism and the phenomenon of “colorblindness”; addressing anxieties about “real culprits”; and creating solidarity in as many different sectors of activism as possible.

“The 99 percent coalition is really in this together . . . the biggest danger to us are divisions on the basis of race, or gender or sexual orientation or religion. We need to reinvigorate a sense of what makes us one people,” Haney López said. “That requires that you mobilize … This is a story of political change that says: ‘Our current, existing institutions will not do it.’”