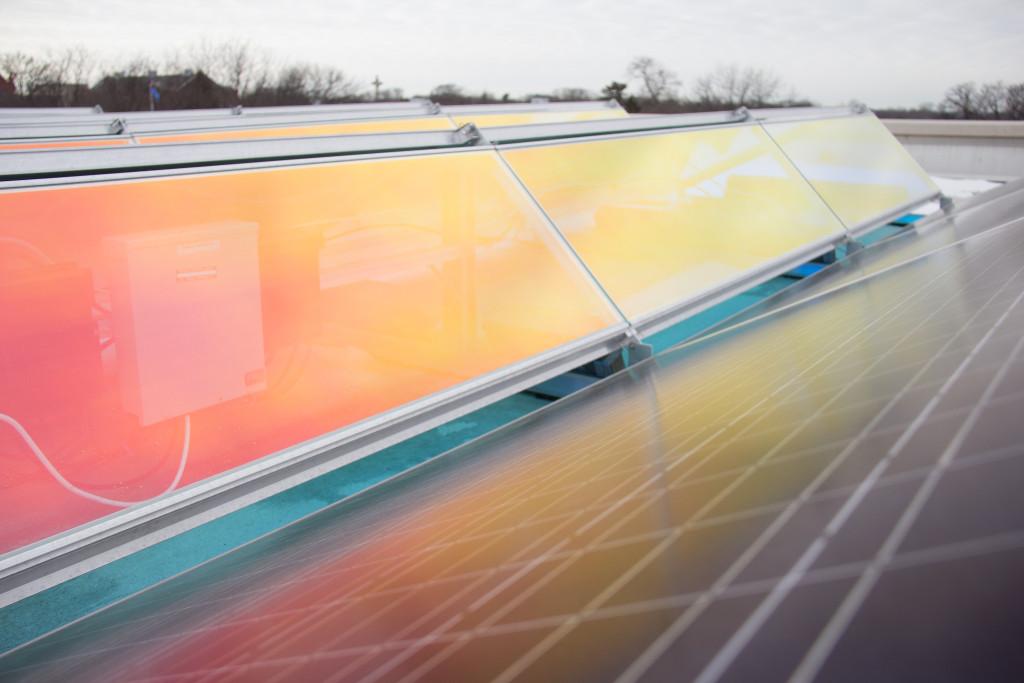 The solar panels on Markim Hall are the first on campus, and will bring Macalester closer to reducing more greenhouse gas emissions. Photo by Josh Koh ’18.

Macalester’s long-standing goal of bringing solar power to campus is finally being realized. Facilities is currently working with local energy providers Innovative Power Systems (IPS) and Xcel Energy to install an interconnected series of solar panels on the roof of Markim Hall. Installation was scheduled to have been completed by today, Feb. 19.

Markim, a LEED Platinum certified building, was built in 2009, and the original designs called for solar panels on the roof. These plans were set aside due to budgetary constraints. Since then, Macalester has twice (2013 and 2014) unsuccessfully attempted to secure a grant funding the solar panel installation.

Installation has now become feasible due to the decreased cost of solar panels and a financial gift from a Macalester Trustee. The unnamed Trustee is financing the installation cost of the panels, which totals around $30,000, according to the Sustainability Office. According to the official IPS proposal, remaining costs for the college total around $14,000. The panels are projected to pay for themselves in terms of energy cost savings within five years.

Many at Macalester see the addition of the panels, which have an estimated lifespan of 30 years, as a positive development.

“The solar panels on Markim will reduce our greenhouse gas emissions and act as a great educational opportunity for our students and faculty,” said Sustainability Manager Suzanne Hansen, who works in the Sustainability Office and teaches classes in the Environmental Studies department.

The panels are projected to generate 17,000 kilowatt-hours of energy annually, equivalent to more than 25 percent of Markim’s yearly energy usage. According to IPS, producing this much energy via sunlight will prevent 25,500 pounds of carbon dioxide from being emitted each year.

In addition to providing greener energy production, Hansen predicts that the panels will benefit student projects and classes.

“I will definitely use the solar panels in my Sustainability and the Campus class,” said Hansen. “I expect faculty in many departments will be interested in using the solar panels as well as other campus [energy production] data in their classes.”

The Sustainability Office is developing a Living Laboratory website related to campus energy production that faculty can incorporate into classes with a sustainability component.

Macalester’s Energy Manager Mike Pumroy is also excited about the ways the solar panels will affect campus in an educational sense.

Facilities plans on using eGauge, a web-based system that measures electric energy and power usage, to monitor the new solar panels. Pumroy says that data obtained from eGauge will be made available to students and other campus organizations.

“The installation is a great project and a great demonstration for our college about what solar panels can do as part of our energy matrix,” said Pumroy, who is involved with logistics of the project. “eGauge is a really strong way to share information about energy usage with students.”

The final steps of the installation took place this week. Post-installation, Facilities Services and Operations will work to train staff on using and maintaining the solar panels and making relevant energy data available around campus. Whether or not the energy production of the solar panels will live up to projections may not be clear for some time. Pumroy said he believes that an accurate evaluation of the viability of the panels may not be possible for a few months, but he remains quite optimistic about the project overall.

“This installation is exciting,” said Pumroy. “I think it will be great to analyze how much of Markim’s energy usage we can convert to solar.”

Many students have had similarly positive reactions to the solar panel addition. One such student, Gordy Moore ’17, is especially excited about the level of student involvement in the plan.

“Students from MacCARES [Macalester Conservation and Renewable Energy Society] originally spoke up and drove the plan to put solar [panels] on Markim, and it was great to see how the administration took the project on,” said Moore, who serves as Macalester College Student Government’s Sustainability Officer.

“I hope that this can be the start of solar installation on this campus, and not the beginning [of an] end,” said Moore.

Macalester does not currently have plans for other solar panel installations on campus. Most roofs on campus buildings do not have the structural capacity to support the added weight of solar panels. However, Hansen said that she’s open to the idea and that it may one day become feasible.

“I would love to have more solar panels [on campus],” said Hansen. “There isn’t an obvious building to take them, but solar panel designs and weight have changed recently, so maybe there are some opportunities in the future.” For now, Facilities Services and the Sustainability Office remain focused on finishing installation of Macalester’s first major solar energy project.

Editors’ note: Mac Weekly staff member and Sustainability Officer, Gordy Moore ’17 was not involved in the writing of this article.