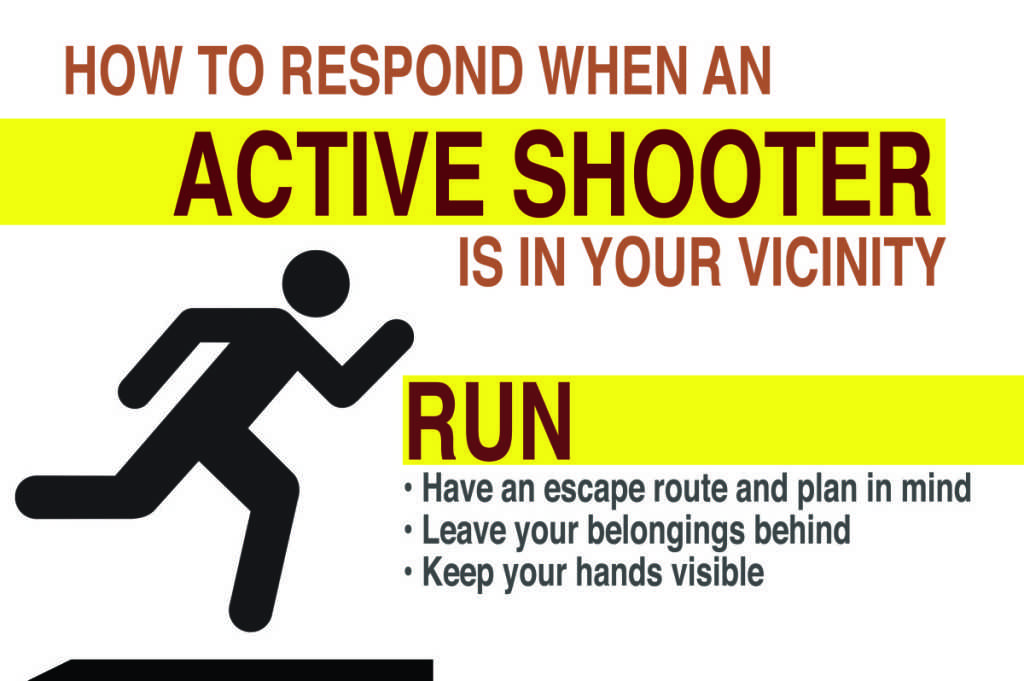 In the last few years, mass shootings and campus shootings have become all-too-familiar sights on our TV screens and in our newspapers, across the country and throughout the world.

In response to this, the Macalester College Incident Management Team is subscribing to a new procedure model for the community in the event that an active shooter situation develops on campus.

The new model, which is already in place at many schools in the area and has been endorsed by the Federal Bureau of Investigation (FBI) and the Department of Homeland Security, consists of three parts: Run. Hide. Fight.

“It’s kind of like the ‘Stop, Drop and Roll’ for fire emergencies. It’s basically a three word acronym that is meant to get you to understand and visualize three things that you can do in an active shooter situation,” said Steve Jorgenson, Macalester’s Security Manager.

While most students may be more familiar with the ‘Shelter in Place’ model, this new procedure is said to give individuals more flexibility to make decisions as the situation evolves.

“It’s not necessarily a policy. It’s an option for people,” Jorgenson said. “Instead of only one facet to utilize, you now have three to choose from for what is best for you.”

“You don’t necessarily need to fight; you can either be passive or you can be aggressive. It’s your choice, but you have to make a decision about what you’re going to do,” Jorgenson said.

The model encourages physical aggression or attempts to incapacitate the active shooter as a last resort, when an individual’s life is in imminent danger.

“We are talking about the very last resort here,” said Jill Wirth, the Environmental Health and Safety Manager. “We aren’t saying go seek out the fight; that’s not it at all. But, I think it’s good to be able to think through that before you are ever in that situation, even though it’s scary.”

So far, the Incident Management Team’s efforts have been focused on campus-wide awareness and preparation. Flyers detailing the new procedure are posted in every building. Daily Piper postings have been advertising the model, and certain physical changes have been made to classrooms so that they lock from the inside.

Specialized trainings were recently organized for the Residential Assistants (RAs). “A lot of it comes down to ‘if you see something, say something,’” said Amanda Rae-Barboza, the Director of Residential Life. “I think what’s great about the training is that it recognizes that people go through shock in different ways. So the training is helping folks think about ‘what if?’ and help[ing] them deal with that shock. It also recognizes that it’s a community effort. So hopefully, the RAs have some skills to lead the communities. Obviously, at that point, their number one priority is their own safety but that if they’re able to gather people, count heads, get in touch with a hall director and let them know who’s with them, those are the kinds of things that can help.”

Eventually, Jorgenson and Wirth want all emergency response procedures, including the ‘Run. Hide. Fight.’ model to be a part of first-year orientation.

“We will have to continue training,” Jorgenson said. “We will need refreshers, because if we don’t people will just forget it, and it just won’t be helpful.”

Jorgenson has also planned for FBI Special Agent Joe Malhoit to come talk about the model to students at several times throughout the month. On Monday, Special Agent Malhoit gave his first of three presentations.

“We like [the revised model] because it works in every circumstance—[for example,] a church, a school or an office to give examples. It gives options,” Malhoit said, echoing Jorgenson’s previous comments.

Jorgenson explained that it never seems like there is a right time to implement these trainings and new security measures.

“I like to think that we are in the forefront of rolling this out at Macalester,” Jorgenson said. “Why roll it now? I don’t think there’s ever a good time to talk active shooter. I think it’s important to get that information out. So whether it’s in the middle of a school year or at the end, everybody’s important here at Macalester. We’re all on the same team. And so my job is that everyone here is safe, and that we make sure you have the options and tools to stay secure.”