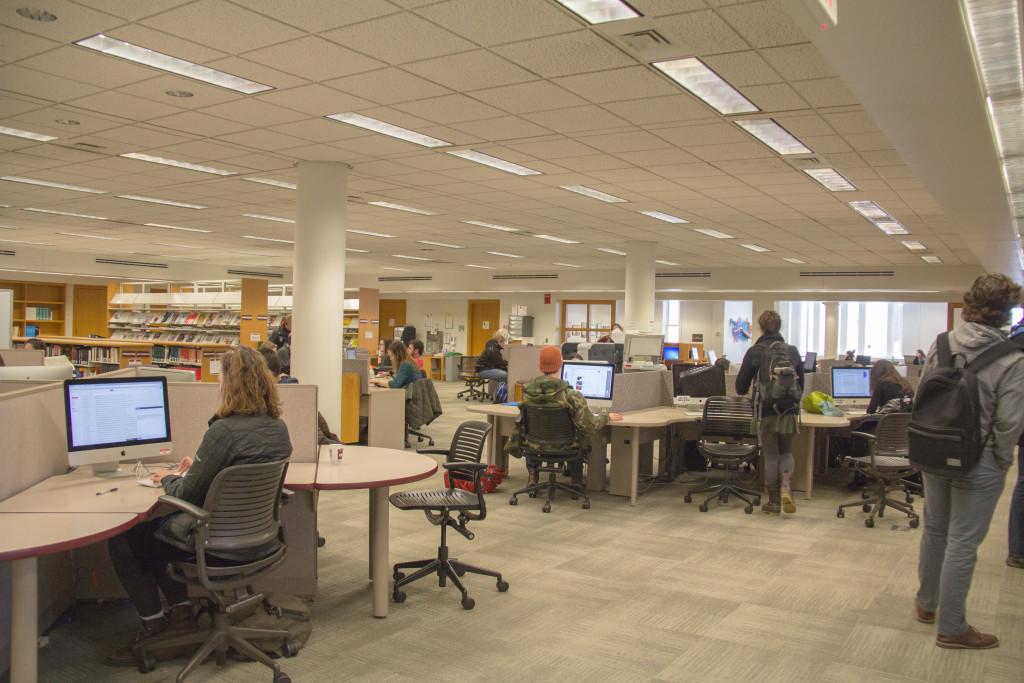 Students work in Dewitt Wallace Library. The library was recently awarded the Excellence in Academic Library award in the “college” category by the Association of College Research Libraries. Photo by Josh Koh ’18.

“This year’s ‘university’ award was one of my colleagues in the Oberlin Group at Atlanta University Center, which is Spelman and Morehouse Colleges … so that was really nice, to be able to win in the same year as her,” Library Director Terri Fishel said.

The process itself was arduous. On behalf of the Dewitt Wallace Library Staff, Angi Faiks, Terri Fishel, Katy Gabrio, Beth Hillemann and Jacki Betsworth authored an application explaining why Macalester deserved the award. Even though the page limit was 10 pages, Macalester’s application was 15 because they felt there was too much to include for only 10 pages.

“You’re limited to 10 pages and we did 15, we kind of fudged a little. And then that application is reviewed by a committee,” Fishel said.

The ACRL aims to award libraries that implement successful programs that other libraries can replicate. In the official press release announcing the winners, the ACRL was especially impressed with Macalester for “its assessment, collaboration and diversity initiatives and effort.”

The library has implemented such programs as a workshop with AdvanceIT Minnesota to introduce underrepresented young women to STEM fields such as computing and robotics on a college campus through a week-long workshop at Macalester. It also exposes the young women to the idea of a future with higher education.

Other successful programs initiated by Macalester’s library include more library instruction programs, assessment of both students and the library itself, publishing more faculty and student work, a physics journal and an American studies journal.

The library staff credits the new programs and improvements to current programs with making the library a more attractive choice for the award.
The Macalester’s library is exceptional, for the quality of the staff and their dedication to promoting the mission of the College.

“They’re one of the best resources that we have … I’m coming up on my thirteenth anniversary here and it just amazes me how every single person on staff here is wanting to help every single person who comes through the door to be successful in whatever they’re trying to accomplish. We hate to say no to anyone,” Assistant Director of Collection Development and Discovery Katy Gabrio added.

In the future, the library staff said they hope to initiate a Diversity in Residence Program.

“We got the approval to go ahead and proceed with developing the grant … now we are just in the process of having to talk to people and then going ahead to write the proposal,” Fishel explained.

The program would bring in young librarians from historically underrepresented backgrounds in the library field to Macalester.

Although Macalester’s Dewitt Wallace Library has outstanding programs, the library staff wish some were more utilized by students.

Among these are the research consultations with librarians who can share new approaches to questions and may save students significant time.

“If you talk to a librarian, they will give you strategies that will save time and help you make effective use of the resources that we have and that you might not even necessarily know we have,” Fishel said.

Fishel does note that there has been a large increase in the number of consultations in recent semesters, signifying that more students are taking advantage of that service.