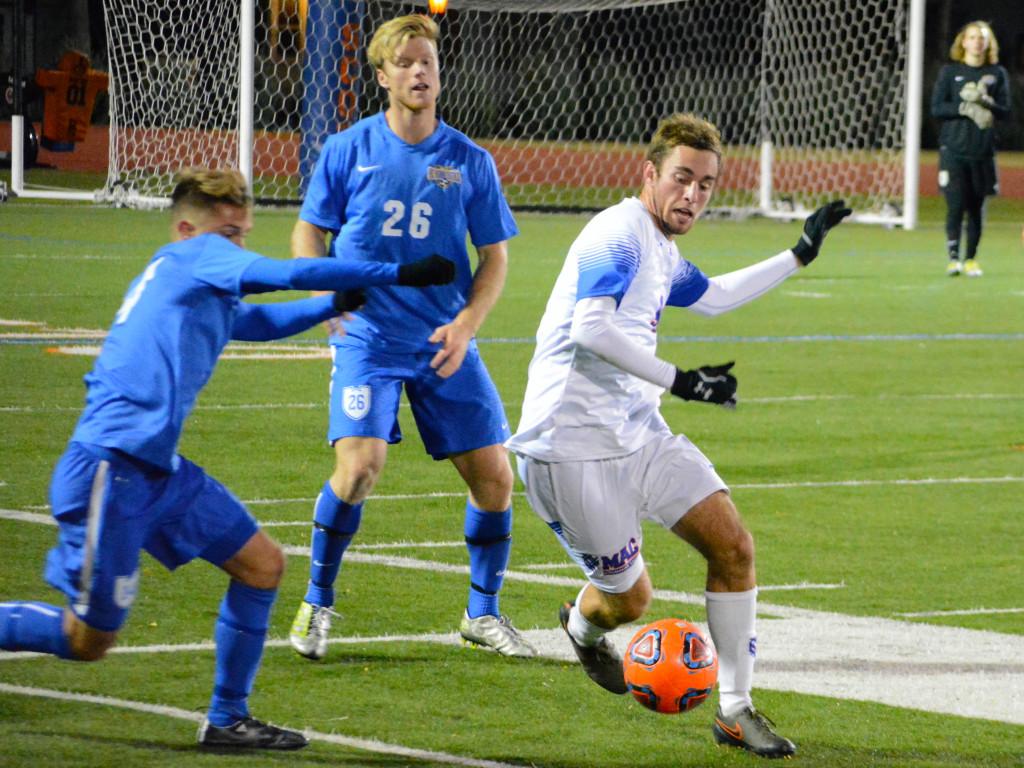 Austin Burrows ’17 at Macalester Stadium in the first round of NCAA Tournament. Burrows scored in the 89th minute to send the Scots past St. Scholastica and into the second round. *Photo by Anders Voss ’16. *

Last Friday, in the 89th minute, Austin Burrows ’17 sent the home crowd at Macalester Stadium into a frenzy, and sent the fighting Scots into the second round of the NCAA Division III National Soccer Playoffs. The striker’s goal earned Mac a date with St. Olaf the next night in the round of 32, one which they would lose by a score of 1-0. The Scots had 12 shots in the game, compared to 8 by the Oles, but were unable to capitalize. Although they came up short of a berth in the final sixteen, their season goes down as one of the best in the program’s history, and one that the players and coaches will never forget. This year the team finished 14-2-5, going undefeated through the regular season and regularly earning a place in the national top 25 rankings. They did the entire school proud.

Successful seasons like these don’t just happen. They are only made possible through hard work and confidence. The belief that the Scots could make it to the national playoffs existed from the beginning. “The idea was out there,” said captain Jac Carlson ’16. “We set team goals during the summer, and one of our goals was to go undefeated at home and to make the MIAC playoffs at least. Winning [the MIAC] was the pinnacle.”

Due to their success in the regular season, the Scots earned an at-large bid into the National Playoffs. Fellow Captain Kovas Zygas ’16 echoes Carlson’s words. “If you would have asked any of us if we could make it to the national tournament, most people on the team would’ve said yes,” Zygas said.

Both captains also believe that buying into their head coach’s system was one of the most important factors leading to their success. This was Head Coach Gregg Olson’s fourth year leading the Scots, so the seniors are the first class who have been with him all along. “Everyone bought into it. That was a big issue when we were underclassmen,” Carlson said. Reluctance buying into a new head coach’s system is something that all teams deal with. Carlson and Zygas only won four games their freshmen year, but everything has been uphill from there, culminating in this amazing year.

In addition to buying in, Carlson and Zygas believe the team’s chemistry was pivotal in their performance. “Team chemistry is huge. This team is special and everyone seemed to gel pretty well,” Carlson said.

Junior Captain Alan Schembri Wismayer agrees and attributes the team’s rapport to the seniors. “Ever since I came in as a freshman, I think the chemistry has just been building. The seniors were the guys who helped lead the way for us, and now my class is trying to do the same thing,” Schembri-Wismayer said.

Despite losing to St. Olaf in their final game after defeating them earlier in the season, the year ended with a lot of excitement. Macalester was given the opportunity to host the first two rounds of the National Playoffs for the first time since 2001. The largest crowd of the year for any Macalester sporting event turned out to cheer on the team for what happened to be their final game. “The stands were awesome,” Carlson said. “It felt really sweet to play in front of everybody there.”

The experience was very unique for the players, all of whom have never experienced it before. “It seemed pretty much like a normal home game, but then when you walk out onto the field, everything feels way more official,” Zygas said.

Looking back on their historic season, both captains are very proud of their team. “Obviously we feel like we could have gone further, but we also had one of the most successful seasons of the history of Macalester Soccer, so there’s not really much we can complain about at this point,” Zygas said.

“Right now it’s kind of hard because I feel like we could’ve gone farther, but once that fades away, I’m certain I’ll be very proud of the team,” Carlson said.

It won’t be easy for the Scots to repeat such an outstanding season, but the returning players are ready to make the best of the offseason in preparation for next year.

“We’re only losing two starters, and those two will be very hard to replace, but since we’re returning most of our team, it should be a good season. We just have to make sure that we take the experience that we have in the NCAA tournament and use that to our advantage,” Schembri-Wismayer said.