Tasting Success: How MacFEAST is changing what you eat 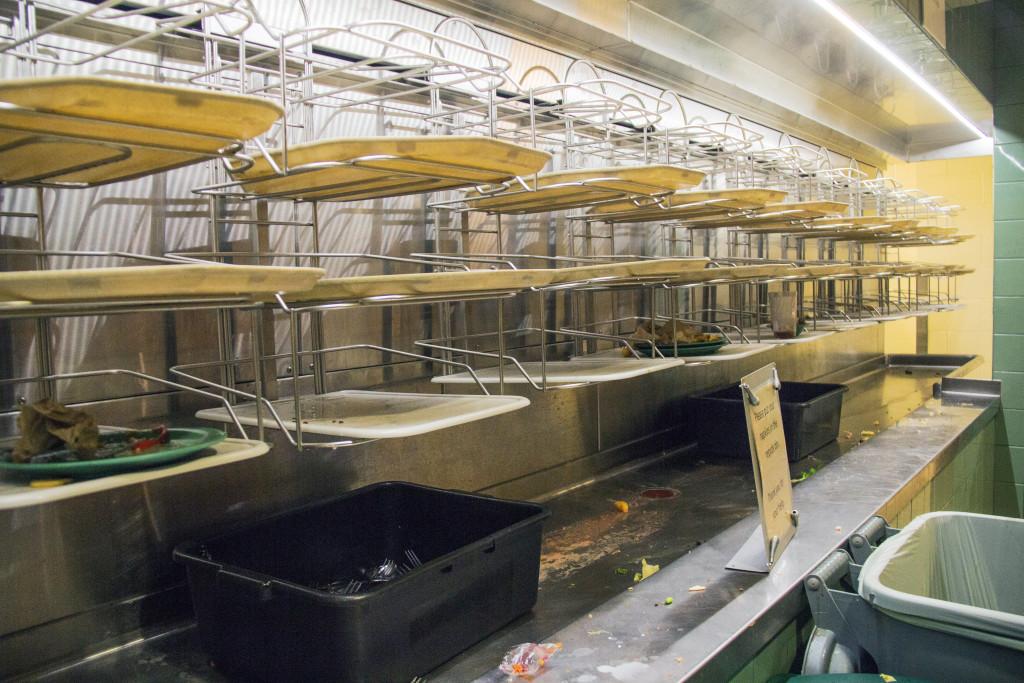 MacFEAST hopes to increase awareness of the food students throw away in Café Mac. *Photo by Josh Koh ’18.*

If you felt bad putting waste in the bins set up by MacFEAST in Café Mac, that’s a good thing; you see the value in the food you eat. Inspired by food justice conferences here and at Carleton College, the relatively new organization MacFEAST pushes for awareness of food issues and sustainability on a large scale.

MacFEAST was officially founded in the spring of 2015. One of their main goals is to have 30 percent of the food served by Bon Appetit at Macalester be “Real Food” by 2020. “Real Food” refers to locally grown, fair-trade, humanely-raised and sustainably-grown food. Macalester President Brian Rosenberg signed on to the Real Food Campus Commitment, a national campaign, in the fall of 2012. While his signature was vital to the sustainable food movement at Macalester, the plan relied on support from Macalester’s student body, hence the creation of MacFEAST.

Another goal of the organization is conducting “food recoveries” in Café Mac. Food recoveries entail packaging, freezing and sending food that isn’t served in the cafeteria to an organization called Loaves and Fishes, which fights hunger. The alternative is the food ending up in Café Mac compost bins or being sent to pig farms. Food recoveries began in the fall of 2014 and were started by Amanda Wareham ’15, who worked in the sustainability office. MacFEAST is interested in expanding this program and involving more student volunteers.

MacFEAST’s third goal is spreading awareness of the issues with the American food system. The organization’s leaders noticed that there was little conversation around campus about food sustainability. Broader awareness in the student body has larger implications than just on campus. Because college dining services big customers for massive food producers, if large numbers of students push for change, then producers can be challenged to be more sustainable.

To achieve this goal, MacFEAST set up a food waste workshop with Jennifer Wustmann, a member of the Macalester-Groveland community council, last month to talk about reducing food waste The organization invited NÜDL to their first meeting to create an open discussion about sustainability and off-campus eating.

MacFEAST has also set up informational tables, screened documentaries and brought an author to campus to talk about organic farming. They also gathered the food that wasn’t eaten at Café Mac and weighed it in an attempt to spread awareness of the great amount of food that is wasted every day.

The effort seems to be paying off. Megan Davitt ’17, a MacFEAST co-chair, said, “It’s been cool to talk about MacFEAST and know that people are interested in the work that we do. Sometimes there’s a difference between being energized about that work and actually do something about it. So seeing that we already have projects underway makes people more interested.”

The issue of food sustainability has unavoidable implications.“Food is the backdrop of every problem because we can’t survive without it,” Davitt said.

It is not so easy to universalize organic foods in the United States. Davitt has heard the skeptics. “When I started getting interested in organic farming, I would get negative feedback. People would say, ‘That’s never going to feed everyone.’ But that’s the wrong way of thinking about it. In our current system? Yes. We can’t feed everyone. But in a new system, organic food could definitely feed everyone.”

The goals MacFEAST set are ambitious. They have already sent 639 pounds of unused food to Loaves and Fishes. They also hope a new food-related concentration will be added to the broad range of concentrations Macalester offers.

The quickly expanding organization hopes to continue growing. Their Facebook page is titled “FEAST” rather than “MacFEAST” because they plan to expand past Macalester’s campus, perhaps to other colleges or even nationally.

Their final goal is for more than 95 percent of the student body to know what MacFEAST is. Now you know. Next step? Help at one of MacFEAST’s food recoveries, buy organic and sustainable foods and make sure you take only as much as you can eat.