Anita Bendickson on prana and self-honesty 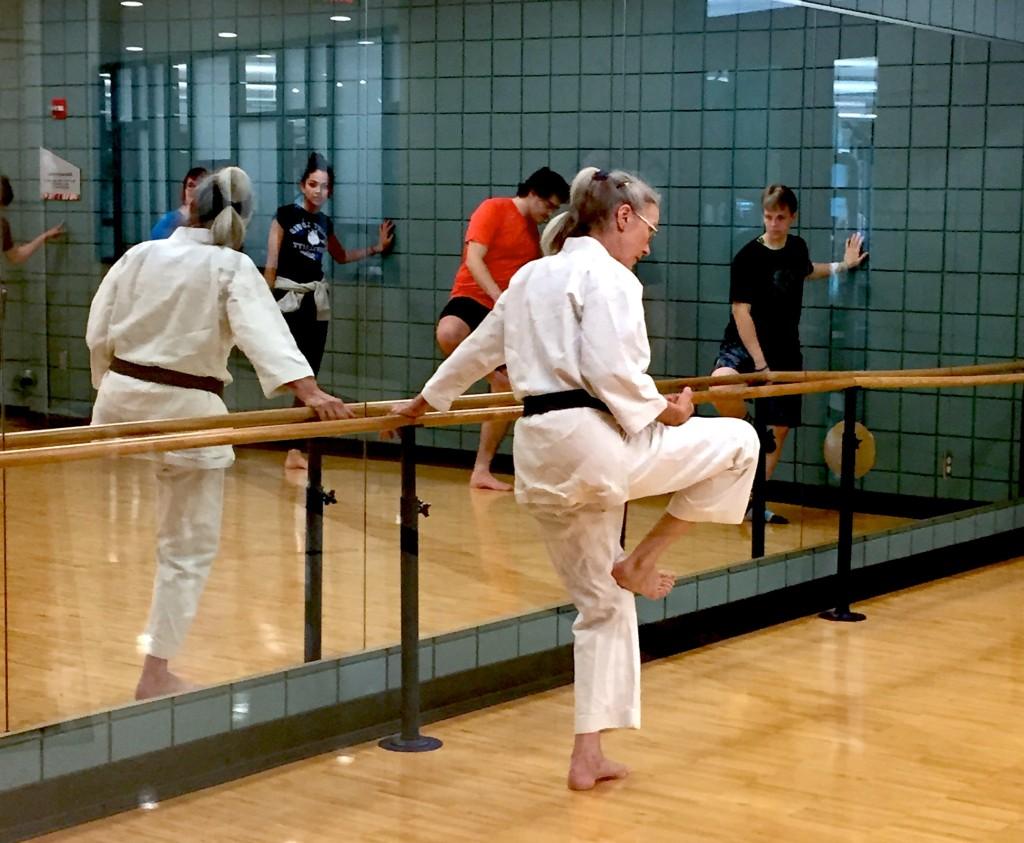 Bendickson demonstrates a kick while students mirror her.

TMW: What do you teach at Macalester?
AB: Through the P.E. department, I teach the karate, yoga and self-defense classes. I originally started teaching here in the early 80s. At that time, I just taught the karate class, which met five days a week. It was quite extensive. And then after a while, I started also teaching self-defense.

There was a period of time, I think in the 80s, when I taught it through the women’s collective. It was the feminist movement at Macalester, and they sponsored a self-defense class once a year. It was a really strong group, a really nice group. And then in the 90s, I started teaching it as a P.E. class.

I’ve been teaching yoga classes here since [2005]. The yoga classes are a wonderful counter to the karate and self-defense. Karate and self-defense are, by nature, training the sympathetic nervous system how to function in times of stress and emergency, whereas yoga is teaching you to develop and expand your parasympathetic nervous system for resting and healing. So having the two sides to what I teach really helps me be more balanced, but it also allows the students to see that you don’t have to choose one over the other. Both things can be a very useful and complementary part of a balanced life.

Have you always had a passion for teaching physical education? Is that something you knew you’d be going into?
I really firmly and strongly believe in what I teach, and I want my students to get as much out of what I teach as I can. The reason I ended up a teacher is because when I was going to college back in the 70s, I was attacked and somebody said, “Well, you should take karate.” So I said, “Okay.”

At the time I was working towards becoming a writer and I was a philosophy major at the University [of Minnesota] and I just realized that the skills that I had weren’t actually helping me deal with the real world. And that’s a traumatized view, okay. I’m not dissing those skills by any stretch, being a good writer. I still read a lot of philosophy; it’s a big part of my yoga teacher training, the various schools of philosophy that yoga has developed out of and I have a passion for that. But at the time, it just seemed to me that I didn’t have the skills to survive.

I ended up taking karate training and becoming very passionate about it. I realized after not very long that I was a different person. People on the street treated me differently. Nobody bothered me anymore and so I thought, “What am I doing that’s different? Because this is incredibly valuable.” I started putting together courses because I thought, people shouldn’t have to get to be a black belt to have these skills, so what’s the basic, essential part of this that would be good for people?

But I what I found after many years of teaching karate is that because it’s sympathetic nervous system oriented, I was becoming depleted. And so then I thought, you know, what else is there? And a friend of mine who is also a karate teacher gave me a yoga tape for Christmas and I started doing it every morning and I got into yoga. So then I did the teacher training and that really got me very deeply into the lineage.

The martial arts have a lineage. You’re not learning from a book; you’re learning from living people. And the same is true in yoga. My teacher learned from her teacher who learned from his teacher, back thousands of years. So that lineage is alive both in the martial arts and in yoga in a way that I’m worried that’s getting lost in this kind of virtual world that we live in. Just Google it, right? It’s not the same as being in the energy field of someone who has lived that. I try, through my teaching, to allow the students to have the sense of the importance of the lineage, not just the skill, so that energy gets transferred.

Both karate and yoga have strong cultural backgrounds. How do you try to translate that as much as you can within a limited setting?
In the yoga classes, I use the Sanskrit when I teach. And I try to explain why poses are named a certain thing so that the students will know that, “Oh I’m not just stretching my quads, there’s more to this. There’s a deeper meaning.” I do the same thing in my karate classes; I use the Japanese terminology. I try to make sure they understand how this was, how this was developed this way, why we are learning these forms that we have to memorize.

When you have a half a second to respond, if you don’t have it memorized, you don’t know it … in the martial arts, you have to have conditioned reflexes. In yoga, that deeper understanding that you get from the lineage allows you to go more deeply into your own feeling, your inner awareness. That’s the idea of yoga.

If we could connect to what’s already inside, we’d be able to be ourselves more fully in the world and that would be better for each person’s own health and for the world. I think there’d be less violence if people were who they were. There are some people, I truly believe, that are broken in their spirit and they need to be restrained for the health of the rest of the world. And it’s terribly sad that they are that way, and one hopes the next time around, they’ll have a better chance of being a healthy being, but I don’t think you can fix everybody with martial arts or yoga or medication. And that’s why I teach self-defense. I think that people need the skills that will help them get out of situations where they’re going to be hurt or destroyed.


Empowerment and self-awareness seem to be big themes in your classes. Are there other values that you try to convey to your students?
Being true to yourself is really important. Self-honesty, not just with yourself but with everyone around you. In self-defense classes, I’m teaching people how to be assertive, and that means you have to say how you feel, really, not what you think they want you to say.

That whole business of, “What do I really want? Who am I, really, and how I can make sure that the people that I’m with know that and they’re hanging around with the real me, and not this thing they want me to be?” That whole thing is another value that I’m trying to put into my teaching.

And the other thing is … It’s a little harder in the martial arts because when you’re fighting, you can’t tell someone, “I’m tired, let’s stop.” You have to be able to continue, so it can lean into a macho attitude of, “if you can’t continue, you’re not good enough.” I try not to let my students be caught in that trap because that’s a self-hurting trap.

It’s hard at a school like Macalester because you students wouldn’t be here unless you were competitive and wanting to be the best – but in the yoga classes, I try hard to get the students to do their own practice and not to try to do poses that their neighbor can do. Again, you’re leaning into that “they can do it, I should be able to do it, and now I’ve hurt myself.” There’s this whole ahimsa, the non-violent thing, that you’re trying to apply to the world, but also to yourself. And I really try to make that a value that the students get out of my teaching.

You’re a teacher, but you’ve also mentioned how you continue to learn. Can you expand on that?
I think if you’re not learning, you get rigid and then you’re done. You’re going to get senile. I’m in my 60s; I can talk about that. To be a good teacher, you also need to be a good student. You need to be open to new information, you need to be looking to deepen your understand of whatever it is you know because that keeps the flame bright. When the flame gets dull, then your teaching loses its prana, its joy. Then you just become a rote teacher, and your students will know that. They feel that. And they won’t get that flame from you.

If you’re not learning, you’re not growing. You’re stuck. Plants that don’t grow die. And that means you’re going to change, and change is the only thing that’s the same. It’s constant! And so, embracing change and figuring out ways to make it positive for you, rather than something that you resist, is important in being a teacher.

You’ve been at Macalester for about 30 years now. How have you seen it change?
I was here when it was the old gym, with the pool that was two inches too short and the old Field House. So Macalester, just the physical reality of it, has changed a lot. I do find, however, that the students at Macalester are inquisitive, challengeable and challenging. You have to be on your toes if you want to teach at Macalester, you have to be ready to answer questions, which is a wonderful thing.

That sense that these people are going to go out into the world and be challenging and be ready to be challenged, that’s a very positive growth thing which I have found to be constant at Macalester, a wonderful thing.

Do you have any advice for Macalester students?
The years when you’re in school are your years to try on as many things as you can and find what your passion is, so that when you go out into the real world, you don’t get pigeon-holed into something that doesn’t let you be yourself. Don’t lock yourself down too quickly. That doesn’t mean that you shouldn’t pick things and stick with them. You’re never going to get good at something if you don’t stick.

And sometimes you’re going to have to stick with something, through not liking it, to get back to that place of finding joy in it, which a greater skill level and greater understanding brings.

But on the other hand, I had a student who got a chance to go to Korea. I teach Japanese karate and she was quite advanced in my classes. She said, “I’m going to Korea for a year. Should I take karate there?” And I said, “Hey, you’d be a fool not to check that out! Don’t close yourself off from experience!” So she did karate, or tae kwon do, in Korea and got a black belt while she was there, which blew me away since it usually takes three or four years. But I would never tell a student, “Oh, don’t do that because that’s not what I teach!” That’s really unfair. This idea of being willing to go try out stuff, even if it’s a little scary, is really … I know students are trying to figure out, “What’s my major going to be, so I can get on with it.” Don’t turn away from that chance to experiment.