Ask Sam the Science Man: Getting in touch with touchscreens 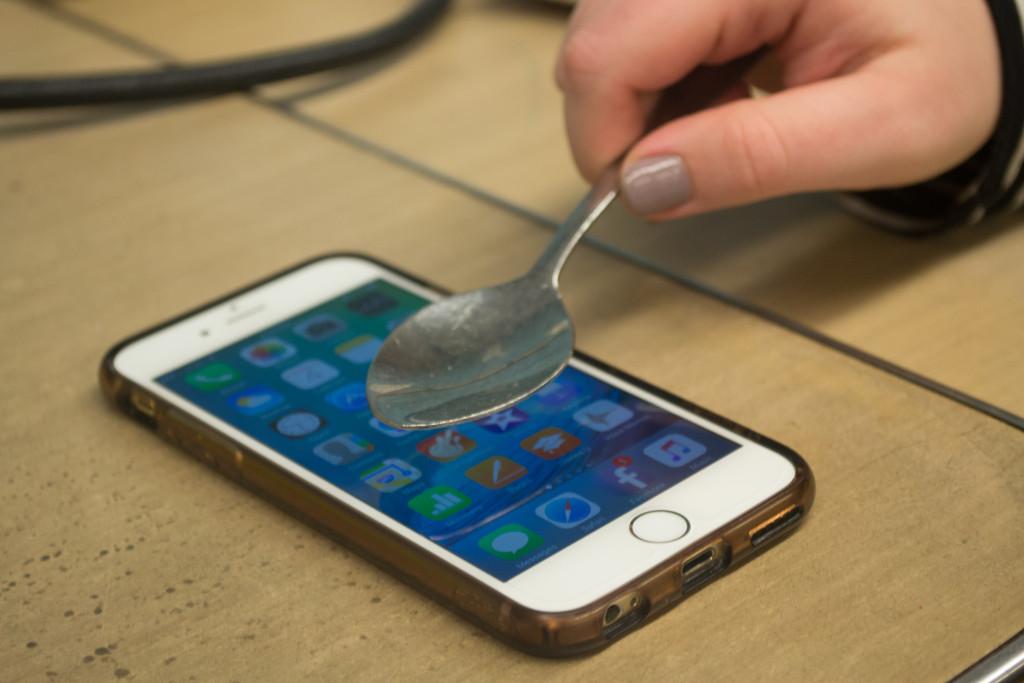 A student tests the response of a smartphone’s touchscreen with a metal spoon. *Photo by Josh Koh ’18.*

About two-thirds of Americans own smartphones. Since 2007, over a billion smartphones have been sold worldwide. Everywhere you go on campus you can see students browsing Facebook while waiting in line at the Atrium, texting friends while walking to class or snapping photos of the beautiful autumn leaves outside. Earlier this year I finally joined the ranks of smartphone users. There are many benefits to smartphone ownership, but one of my favorites is the joy of a touch screen. Touch screens are remarkably sensitive even to gentle touches. What is this sorcery? How does it work?

Smartphone touchscreens have no moving parts. Everything is ‘solid state,’ unlike earlier touch screens that involved some sort of flexible top layer. Between the top protective layer of glass and the display screen is a layer of Indium Tin Oxide (ITO). ITO is a remarkably engineered ceramic material that both conducts electricity and is transparent. A smartphone moves electrical current through a system of narrow strips of ITO running across the screen right-to-left and top-to-bottom, making an xy-plane.

Your phone is constantly testing these connections by running an alternating electrical current through each channel in sequence. As your finger approaches the screen, your body’s natural electronic properties interfere with the current flowing through the ITO grid, which is monitored by a microprocessor. Your phone measures the x and y-coordinates of your finger separately to locate which button you pressed. Your finger never actually touches the touch sensor but interacts with it through the glass.

So why is it that I can’t use my phone with heavy gloves on, or swipe the screen with other objects? Here is a science experiment that you can attempt for yourself (YES KIDS, try this one at home!). Using items around your room, try to make a stylus for your smartphone or tablet. Find something other than your finger that activates the screen when you touch it. The first thing I found that worked was a grapefruit from Café Mac, but it was bulky and difficult to tap small icons with. I also found that a Ziploc bag filled with some water from a drinking fountain worked. I tightly sealed the top and used a pointy corner of the bag as a stylus. If you find any other interesting things that work, shoot me an email with your invention! The best thing I found was a large metal spoon. If you use the handle, it will not work. Instead, swipe the screen with the rounded bottom of the spoon.

What do your finger, a grapefruit and a bag of water have in common? They all contain freely moving charged particles, called ions. An adult has roughly 200 grams of salt in their body. In your finger and the grapefruit are a large number of salt ions dissolved in water. Even in potable water, there are many dissolved metal ions, such as calcium and magnesium from trace minerals. As a result, your skin conducts electricity!

However, not all things that conduct electricity will activate the touch sensor. Why don’t a fork or a paperclip work? Why is it that only the wide part of the spoon works? Things get a bit more complicated here.

An important concept for engineers designing a touch screen is capacitance, the ability of a structure to temporarily store electromagnetic charge. A conductive wire allows current to flow through it, but it has no way to store that energy. Electrical appliances use specially designed components called capacitors to control the motion of electrons sloshing back and forth in alternating current circuits. A capacitor can be made with two flat conductive materials brought close together without actually touching.
For example, imagine a thunderstorm. A dark storm cloud, the ground below, and the air between form a natural capacitor with a very high capacitance. A large differential in charge between the cloud and the ground accumulates. Eventually, the difference in charge is so great that the air between the cloud and the ground cannot stop the charge from balancing out. The natural capacitor system is overloaded. With a loud crack and a burst of light, an enormous flood of electrons surges to the ground.

Curious about science? Want to know how some technology works? Email me at [email protected] and your question might be featured in a future column!