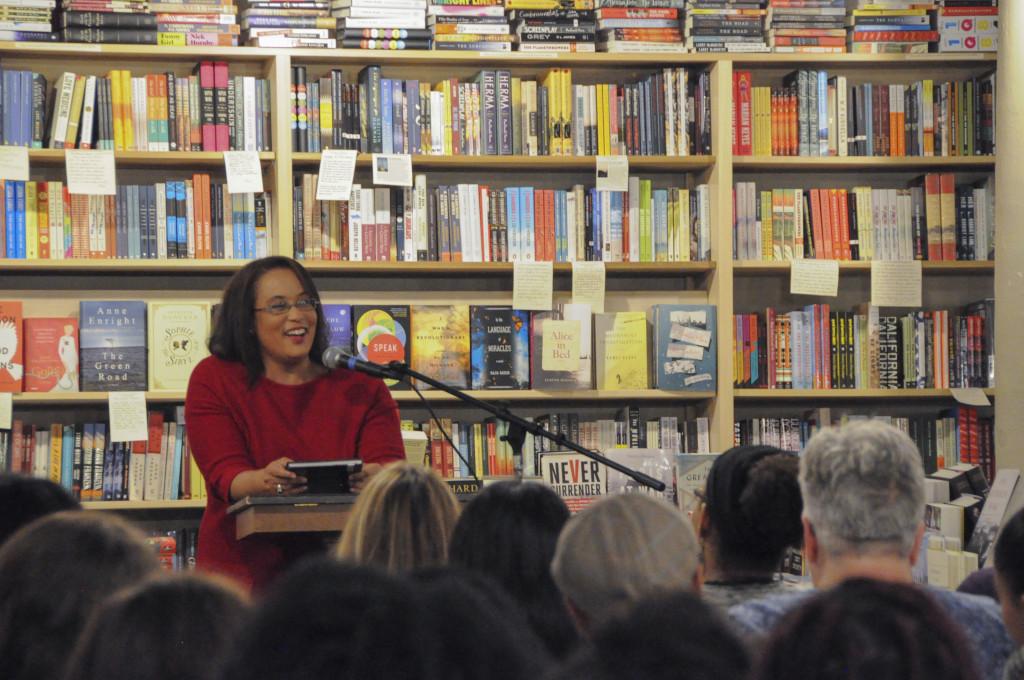 Professor Dutchess Harris read from her book *Black Lives Matter* Monday evening at a standing-room only Common Good Books. The book has earned Harris this year’s Minnesota Association of Black Lawyers’ Profile in Courage award, and is set to be taught in Minneapolis Public Schools. *Photo by Maya Rait '18*

Professor Duchess Harris read from her book Black Lives Matter Monday evening at a standing-room only Common Good Books. The book has earned Harris this year’s Minnesota Association of Black Lawyers’ Profile in Courage award, and is set to be taught in Minneapolis Public Schools. Photo by Maya Rait ’18.

On Monday, American studies professor Duchess Harris read from her new book Black Lives Matter at Common Good Books. The book is coming out in winter of this year. It covers the history of the Black Lives Matter movement for middle and high school students. The book is part of a series published by ABDO publishing that makes current events understandable for grades six through twelve. Other topics in the series include Ebola, ISIS, transgender rights and the vaccination debate.

Harris co-wrote Black Lives Matter with Sue Bradford Edwards, a journalist from Missouri who had covered the protests in Ferguson. Harris began the project as a content consultant “because I both have a Ph.D. and a law degree, so I know a lot about race and criminal justice and I have written two other books,” she explained. “I did so many revisions that I ended up being a co-author.”

“Academics are notorious, we err on the side of overly cautious,” Harris said, citing the time constraint as the most difficult part of writing the book. “It was painful for me to hit the send button, it was just unimaginable to me that it was done.”

Black Lives Matter is tailored to the reading level of secondary school students.

“It was super helpful to work with someone who has done other young adult books, and so not only is my co-author a journalist, she has also done other books like this,” Harris said.

Harris had previously written largely for those reading at an undergraduate level.

She reflected that “it was great to think about the concept of a glossary,” along with the book itself being 112 pages of large text and many pictures. “For an undergraduate, it would be two homework assignments.”

Harris continued, saying “because I have a law degree and I have taught at a law school, to step back and think: everyone doesn’t know what the Fourth Amendment is—how do you explain that? You can’t just say ‘stop and frisk’ and keep going.”

The structure of the book is designed to create a hook in the beginning, followed by an historical and legal background on civil rights, current events. and concluding with the “calling for change” chapter. The current events cases included are Michael Brown and Ferguson, Oscar Grant, Trayvon Martin and Renisha McBride. These span from 2009–2014, giving only a snapshot of the stories in the news.

Harris finds that often students in her classes do not have the background to talk about current events such as the ones discussed in her new book. When asked how race was talked about in their high school, students often answer that race and racial issues were not discussed. She noted that students do not sign up for a math class at Macalester without having taken algebra in high school.

For Harris, writing this book has reinforced the importance of covering the background of civil rights in America in her classes.

One of the main goals of Black Lives Matter is to create explicit discussions of structural racism in secondary school settings, an experience which Harris has found most her undergraduate students have not had. Photo by Maya Rait ’18.

“I have this classic lecture that… [tries] to encapsulate Reconstruction to Brown v. Board of Education in an hour,” Harris said. “I feel like if you have a cursory knowledge of that, you can talk about more contemporary things. So much of [the debate] is legal and I think that so many of those things aren’t covered in high school, and so that’s why students get stuck with these questions.”

“People really don’t understand how long housing was segregated. The Fair Housing Act wasn’t passed until the year before I was born, and that’s still less than 50 years ago,” she added.

The target audience for this book is not limited to secondary students. To Harris, the most powerful impact will be for “parents who have no background, who [having read the book], have a way of having conversations with their kids,” she explained.

She brought up the Twin Cities as an example. “If you have Somali and Ethiopian immigrants and those parents have no history, no understanding of the history of Black Americans, for instance. If they were able to read this book and then have conversations with their kids, because one of the things is their kids might be treated the same way as a Black American kid would be, they might not even understand that. And see, that’s very real in the Twin Cities,” Harris said.

Largely, the public response to both the book and the idea of the book have been supportive and positive.

The reading at Common Good Books on October 26 was a visual representation of the support Harris has received.

The book is being accepted not only by individuals, but increasingly at the community level as well.

The book and Harris’s other work has earned her this year’s Minnesota Association of Black Lawyers’ (MABL) Profile in Courage award. The Association gives the award to those who work to further the MABL mission of representing Black citizens in the legal profession and judicial system.

The response to Harris’s book has not been all positive, though.

“I think the prevailing argument is that it is indoctrination,” Harris said.

At the same time, though, “people are just going to say that,” Harris said. “I don’t think you can legislate morality. If that is where a parent is, it is very difficult to move them from that place.”

Overall, though, Harris said there has been a “serious response” to the book.

“What I mean by that is that ‘we are taking you seriously and we are responding quickly,’” Harris said. “That exceeded my expectations.”