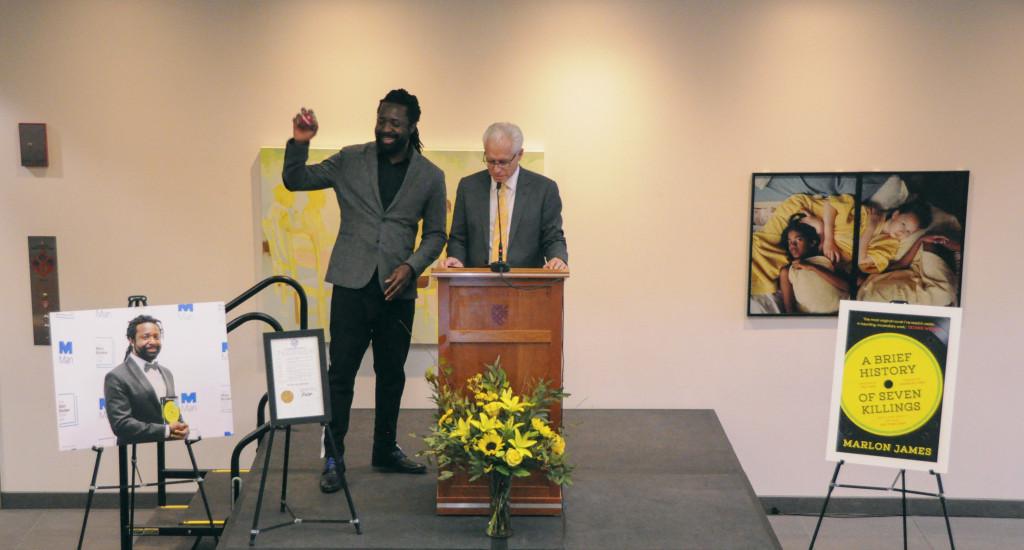 “The way life works, good things don’t always happen to good people. But when great things happen to great people it’s really, really special, and in this case, something great has happened. Because, Marlon, you are a great person, and all of us at Macalester are about as proud and happy as we can be,” Rosenberg said.

English talked about James’ drive to make the most of every situation.

“He will be cheering at a Janelle Monáe concert, enjoying an excellent cocktail, lecturing a certain view in fiction, competing in a 64-mile bike race, commenting on student writing, conducting research in Berlin and Lagos, attempting to sneak into Paisley Park, sharing an elevator with Bill Cunningham, or acting as a personal trainer for a dear friend,” English said. “In any of these cases, you can be confident that Marlon will not hold back in any way or at any time. He not only makes the most of these occasions, but also gives the most.”

English described James’ writing style as “thrillingly creative” and singular in its capacity to affect readers. “He breathes life into his writing, into his characters, so that even the dead ones not only speak, but they live on in your imagination after you’ve closed the book,” English said.

After English’s remarks, Rosenberg surprised the audience with a proclamation from the state of Minnesota, signed by Governor Mark Dayton.

After a minute of congratulatory applause, James took to the stage, where he talked about his experience at Macalester, the evening he received the Man Booker Prize, and how he approached writing his book.

Wednesday was the nine-year anniversary of the day James applied for his job at Macalester, and he spent some time reflecting on how much he has appreciated his time here so far. “I fell in love so hard with this college,” James said. “Macalester has a huge reputation, and you don’t know this until you leave.” James said he is still genuinely surprised his book won the Man Booker.

“The thing about the Man Booker Prize is that quite a few people in the room already know who’s won and they have to keep it a secret. And usually you’re told, five minutes before, to just watch which direction the photographers are walking, but of course I forgot all of this, which is why there are pictures of me about to eat.”

James, who has started research on his next book about the Middle Ages, spent four years writing “A Brief History,” and researching it with the help of Macalester students. He explained that part of the reason he was shocked at his success was because of his book’s structure.

“It’s honestly the loosest and most creative novel I’ve ever written,” James said. “This is the first time where I deliberately tried my best not to think about what a book should be, what art should be, what a novel should be, even what prose should be. So for me it’s still pretty weird that it’s the one that won these prizes.”