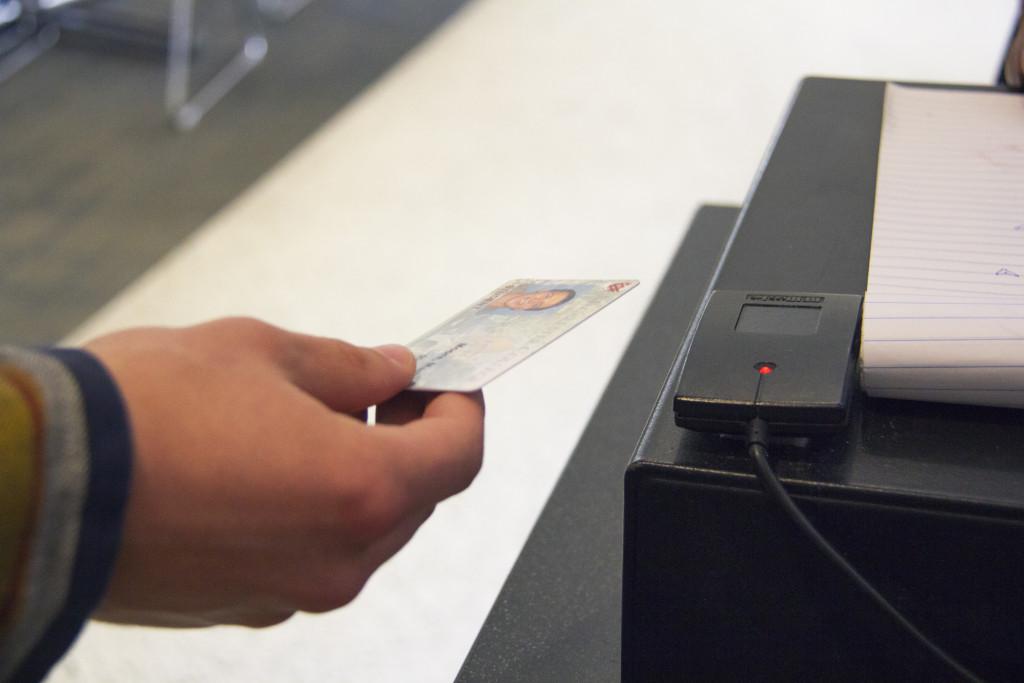 A student uses the RFID system to swipe into Café Mac. *Photo by Josh Koh ’18.*

At mealtimes, hundreds of students pour into the Macalester Campus Center, and with a casual tap of a card, file into Café Mac. Most of these hungry, tired and stressed students do not stop to wonder how the reader recognizes each card and never gets confused. What is this sorcery? How does it work? Radio Frequency IDentification (RFID) technology makes it all possible.

The Café Mac card reader emits radio waves, a form of light that is too low energy for us to see. Sandwiched inside your plastic ID card is a transponder, a tiny two-way radio. The transponder consists of a thin antennae and a microprocessor. The radio waves emitted by the Café Mac card reader jiggle the electrons in the antennae in your card, making an electrical current.

There is no battery in your ID card. The radio waves carry just enough energy to switch on the microprocessor, a small computer like the one in a digital clock. The microprocessor has just one job — when powered on, it sends back a brief electrical signal containing code for a unique, identifying five-digit number. The electrical signal jiggles the electrons in the antennae again, broadcasting a radio signal from the card back to the reader. In a split second, the card reader at Café Mac consults a computer system in the ITS office before deducting a meal swipe from your account. The reader then emits a triumphant BEEP and flashes the little green light to usher you in.

The direct ancestor of RFID is RADAR (Radio Detection and Ranging). During World War II, the night skies over the English Channel were swarming with radio waves scanning for airplanes. A British top-secret project developed the Identify Friendly or Foe (IFF) system. Every British plane had a built-in transponder, like the one in your student ID card, to prevent friendly fire accidents by broadcasting a distinct radio signal that British RADAR operators could recognize. One of the first RFID systems as we know them was used by Los Alamos National Laboratory in New Mexico during the Cold War. RFID tags were attached to semi-trucks and readers at the gates of secure facilities. By this method, government officials and scientists discreetly tracked shipments of sensitive nuclear materials. Decades of persistent research in microprocessor manufacturing eventually made RFID technology profitable for mass production. Demand for RFID cards and similar products has grown into a multi-million dollar industry.

With some creativity, RFID has all sorts of uses. For the past eight years, Onenee Saloka has overseen the system at Macalester College as Card Services Manager. Saloka makes sure that your card can open the doors you need to, that your meals are deducted properly and that off-campus businesses continue to accept aux points, among other functions. From the beginning of the semester through the end of September, 102,890 meal swipes were spent around campus. Saloka has visions for how to improve the swipe system, including a proposal for a new method for ordering food from The Grill online so it is ready to eat by the time you arrive. Ultimately, he imagines a “cashless campus” in which your ID card is all you need on your person. “You don’t need to carry cash or carry keys. You can leave your wallet at home knowing that if [your ID] gets lost, you can just report it.”

The Café Mac card reader is a legacy of the work of generations of scientists and inventors. Next time you swipe into Café Mac, take a moment to appreciate the clever engineering and hard work that makes our daily life more convenient.

Curious about science? Want to know how some technology works? Email me at [email protected] and your question might be featured in a future column!