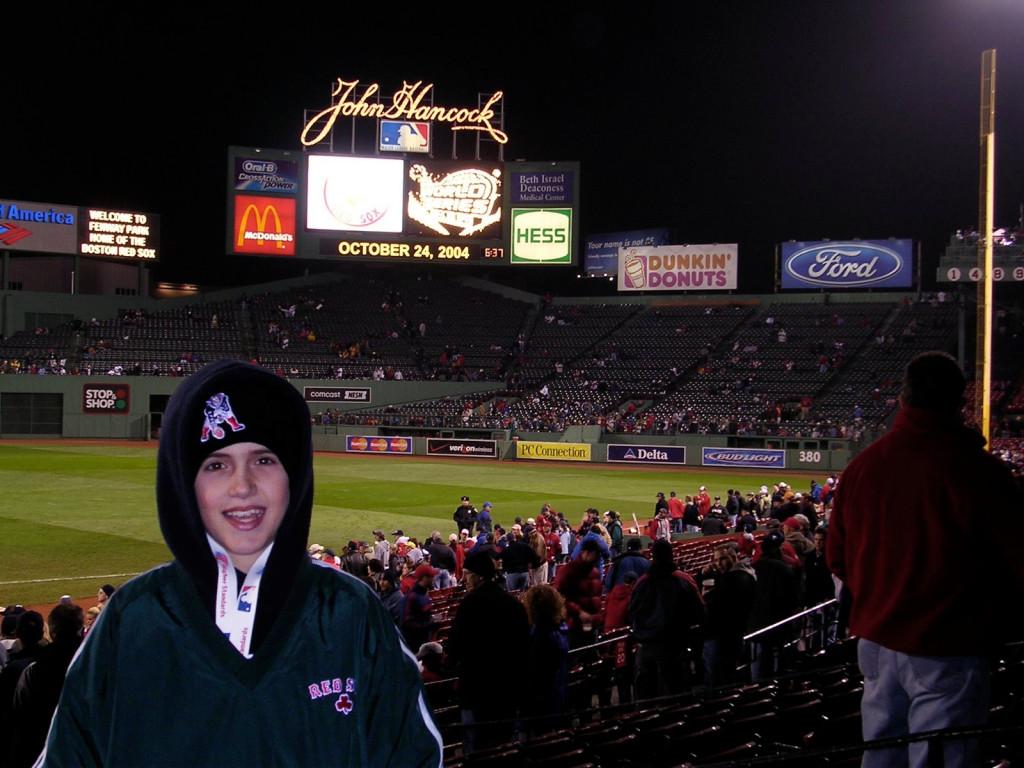 The author at Fenway for the World Series in 2004. Courtesey of Max Horvath ’17.

So I want to tell you a love story. It started slow and I didn’t expect it to happen, but all of a sudden what began as a taste for hot dogs and popcorn had morphed into a love of something else.

The object of my affection certainly meant something to me in the early years of our relationship, but in 2004, I went head over heels. That year, when my team’s curse was broken and all my 10 year-old dreams came true, was when I fell in love with baseball. Some of this love was circumstantial and thus bound to happen. Boston Red Sox fans have a different, deeper connection to the game than any other fans (if we do say so ourselves). No city is as powerfully tied to their team as Boston is to the Sox; the electricity after a win and the deflation after a loss are equally tangible on every corner and in every neighborhood. And it all, of course, revolves around Fenway.

Sitting in Fenway Park is a metaphysical experience: you can feel 36,000 hearts racing all at once, hear every single disappointed sigh individually. The energy is palpable, the hum and roar of the crowd coming in erratic waves, split seconds of silence interrupted by an explosion of hands in the air throwing shouts and cheers into the night sky. There’s a reason people travel from all over the country to sit in those uncomfortable wooden chairs.

To finish my story: the fall of 2004 was one of the greatest times Boston has ever known. A lovable gang of misfit players were overcoming enormous odds again and again, finally breaking an 86-year title drought known as “The Curse of the Bambino.” I was there to soak it all in at Fenway, scarfing down Fenway Franks, throwing my whole body into every cheer and ending every night in a pool of my own either joyful or miserable tears, depending on the outcome of the game.

I was gulping down the Kool-Aid at an astonishing rate, every second falling further and further in love with this simple game. Now, I’m in a committed, life-long relationship with baseball. That’s my love story, but it’s not an uncommon one. That year alone, thousands of fans had stars in their eyes just like I did, and more and more fall helplessly in love every year. Those fans know that there’s something inherently different about this game. The sights, the smells and the sounds open worlds of their own. The feeling of being at the ballpark is overwhelming and addictive. It grabs you and yanks you every which way until it’s all you can think about. Every fan has a library of moments the game has given them that they will never forget. If you love baseball, you love baseball.

Now is the time of year when those life-long relationships between fan and game begin: the playoffs. Everything is on the line at all times, and every moment is tense and exciting and new. Simply put, there’s nothing like it.

Even after watching my team cap off an embarrassing season by missing the playoffs for the second straight year, the playoffs are an intoxicating time for me and my friends. There is always something to get excited about, something to cheer about, somebody to be surprised by, even if you’ve got no skin in the game. That’s part of what makes baseball so universal and so powerful. So, as you (hopefully) settle in to watch the playoffs this year, eager to experience the storylines and already tensing for the moments that will last a lifetime, take a second to remember how special it is. Remember how there really couldn’t be anything better.

It hurts me to say this, but these days baseball isn’t as universally beloved as it once was. People say it’s too slow, too boring, too archaic in its rules and traditions. If you’re one of those people, or if you’re inclined to agree with those people, I implore you to give the game a chance this year. Sit down with a few baseball fans and watch a playoff game, just one, start to finish, preconceptions checked at the door. You have nothing to lose except a few hours, and you might just fall so hopelessly in love that a 700-word column couldn’t do it justice.