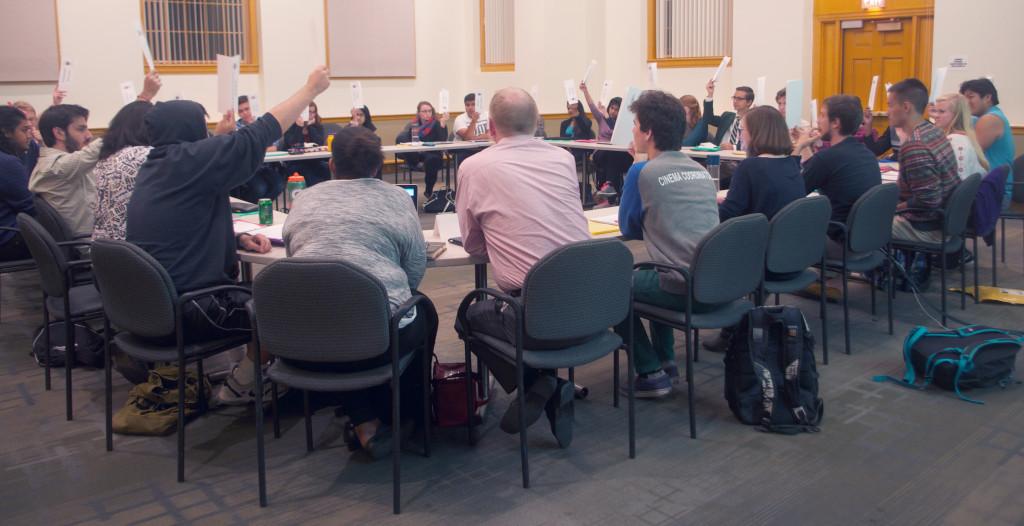 Pictured: MCSG Legislative Body voting during their weekly Tuesday meetings in Weyerhaeuser boardroom. Meetings are open to the public. Photo by Maddie Jaffe ’17.

MCSG’s semester is in full swing. Voting decisions on constitutional bylaws and the omnibus bill were moved to next week, on October 6. The meeting commenced with the chartering of the new Vietnamese Cultural Club. Requirements for student assemblies and forums were debated, but not finalized. A Community Chest request to fund a member of the Drop City Commune’s visit to campus was approved. The members of this year’s judicial counsel were chosen. As the meeting came to a close, Program Board events were announced; the new members of the Income Inequality Commission (IIC) were approved; and the Academic Affairs Committee (AAC) was granted funds for this semester’s coffee and donuts event. Concluding remarks from representatives were positive; AAC Chair Caroline Duncombe ’18, described the meeting as “amazing.” While the legislative body as a whole has determined goals for the semester, much of MCSG’s work this year will be a product of its five committees: the Student Organization Committee (SOC), the Financial Affairs Committee (FAC), the Student Services and Resources Committee (SSRC), Program Board (PB) and the Academic Affairs Committee (AAC). The following is the breakdown of three committee’s goals for the semester and year.

SOC chair Suveer Daswani ’18 is optimistic about the SOC’s future. “This year, we’ve come up with a couple of creative and innovative ideas with the SOC as a whole,” Daswani said. One of these ideas is a Buzzfeed quiz intended to work towards increasing communication between student organizations and the student body.

“We feel that not many students know about all the various student organizations on campus. They probably know a few of the big ones. We are hoping we can spread more awareness about the smaller organizations,” Daswani said. “We’re hoping that the Buzzfeed quiz can ask a couple of questions and actually give students their student organization match.”

The SOC is also hoping to help facilitate leadership transitions in student orgs.

“We’re reaching out to past and current org leaders and making sure that the SOC is there to support orgs as they go through this leadership transition process,” Daswani said. “There is a big communication gap between past leaders and new leaders and we are hoping to bridge that gap and make new leaders more experienced than the past leaders were.”

They hope to encourage student orgs to use OrgSync as one mechanism to facilitate these leadership transitions. Working with Campus Activities and Organizations, the SOC streamlined the OrgSync process over the past summer.

“Over the past years, OrgSync has been a failure. Students have been very scared to even open the software. It can get confusing,” Daswani said. “With the help of CAO, we actually worked to streamline the software and make it much more user-friendly and accessible for student organizations. Now we have the entire charter process on Orgsync. It definitely is a very powerful and useful software and something we were hoping for is that students actually make use of it.”

The FAC has concrete goals for the rest of the year. They recently determined that they will have $25,000 to give out as additional allocations for the year. The FAC has also allocated money to the Lectures Coordination Board and the new compostable service.
Additionally, the FAC has reorganized the way student orgs fund Kagins after much confusion and debate last year.
“There’s a lottery system for Kagins. We’re setting aside money each semester so that the Kagins are already funded, but an org has to jump through a lot of hoops in order to get there,” FAC chair Dan Yee ’16 said. “They have to have leaders of the org be there and be sober and there needs to be a member of CAO there all the time. We’re trying to cut down on a lot of the problems we’ve had with Kagins before. Also, if we don’t believe a Kagin is central to why the org is throwing an event, they may not actually be approved for it. We’re also encouraging people to collaborate on Kagins.”
Along with reorganizing Kagins, the FAC is hoping to be more consistent about applying regulations to p-cards and funding for travel grants.

“A lot of people are saying ‘last year the FAC funded this,’ but last year, things weren’t always done to the best degree,” Yee said. They have created new requirements as well. For example, orgs cannot buy dishware; they need to go through Macalester’s compostable dishware service.
“We’re working currently on crafting an FAC code of ethics so that other people can see how we hold ourselves accountable,” Yee said. “We want to be as transparent as possible. We love government transparency, and we also love government being efficient at the same time.”

The AAC is working on a variety of different projects. One project they are working on is establishing more support for students for whom English is not their first language. They are working with the MAX Center as a part of Macalester’s writing initiative.

“It’s a tricky thing because we have so many different people coming to Macalester, with regards to their English levels,” AAC chair Caroline Duncombe ’18. “So we are trying to figure out where the need is, what do people want, what kind of support systems are necessary.”

They are also planning to try to get credit for science labs. The credit would be optional so that people wouldn’t go over the 18-credit limit, but Duncombe said “we are still figuring out the details.”

The AAC is also working with Lisa Landreman to get accreditation with the school for Semester at Sea.

“It’s a program that the school does not [currently] recognize, but that a lot of students would be able to get scholarships for,” Duncombe said. “It’s also a good alternative for international students in general.”

They are also hoping to compile a list of which courses will fulfill graduation requirements before students have to register.

“I’m going to have a meeting with the Registrar’s office about that, but basically it’s about making it easier on the students,” Duncombe said. “That’s something we really have to work with the Registrar on, and I think there would be exceptions, because some classes don’t know whether they will meet a requirement until they start but I think making an overall, general deadline is a good idea.”

“What the AAC really wants to do this semester is better the academic experience for everyone, which includes academic student life and filling in some gaps like where credit should be attributed, and making sure that the correct support systems are in place for students from all different backgrounds,” Duncombe said.

Updates on the Student Services and Resources Committee and Program Board will be provided next week.