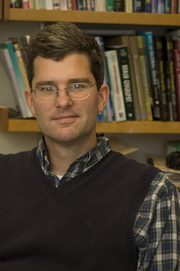 The National Science Foundation (NSF) recently awarded a grant of $480,000 to a research team including geography professor Bill Moseley to study the effects of the New Green Revolution on female farmers and food security in Mali, Mozambique and Cȏte d’Ivoire. Moseley will be focusing his research in Mali.

The research team also includes Rachel Schurman of the University of Minnesota; Thomas Bassett of the University of Illinois, Urbana-Champaign; Heidi Gengenbach of the University of Massachusetts, Boston; and William Munro from Illinois Wesleyan University. In the 1960s and ‘70s, the first Green Revolution focused on hunger crisis alleviation through improved crop production with means such as fertilizer, pesticides and hybrid seeds, primarily for wheat and rice.

Now, the New Green Revolution is taking place in Sub-Saharan Africa. It is focused on new and different technology as well as the introduction of value chains, which are moving emphasis from subsistence to commercial farming.

“The chain is people who manufacture the inputs: seeds, fertilizer, pesticides. [Then] the commercial farmer buys those. By buying the technology, the farmer improves their production, and then they sell the output and that’s processed in what they call value added activities,” Moseley said. “The idea is, commercialization allows you to improve productivity and earn more money, which is supposed to enhance nutrition.”

Moseley discussed how proponents of the New Green Revolution “are also focusing on a lot of African food crops that didn’t get as much attention in the first Green Revolution, and increasingly they are focusing on women… [who] are producing 70% of the food in Africa.

“The idea is that if you get these technologies out to women and integrate them into these value chains, they’re going to make more money. [It’s] argued that if women make more money, they are more likely to spend it on food and the nutrition of their children.” Moseley will be looking at the commodity of sorghum, a genus of plant historically grown by men that is now being grown more by women.

“One of the issues is that when you’re buying all of these inputs, a lot of times you have to take loans, so you’re taking on a lot more risk. Agriculture is an inherently risky business,” Moseley said.

His concerns are primarily that this New Green Revolution will benefit wealthy farmers, but potentially hurt the poor.

The group applied three separate times before receiving the grant. They had been thinking about the project for two years prior to applying, making the total process five years in the making. Moseley said that the highly-selective grant process was “brutal.”
Moseley said he thanked the Office of Corporate and Foundation Relations at Macalester for helping with the writing of the grant proposal.

The group hopes that their researchers’ impact is as broad as their academic interests which include but is not limited to sociology, geography and political science.

Every summer for the next five years, Moseley will travel to Mali to conduct empirical research, asking questions to see if the New Green Revolution is successful in providing food security and increasing nutrition.

“We are asking a lot of questions. We have no proof that this is actually going to work the way the donors suggest it will. Is this really going to help the nutrition of the women and children in the family?” explained Moseley.

The researchers are hoping to gauge the impact of new technology on income and nutrition of the women and children in the studied region.

Moseley hopes to include the group’s findings in the classes he already teaches at Macalester, namely “The Geography of Africa” and “People, Agriculture and the Environment.”

Moseley’s students are already learning from Moseley’s experiences outside of Macalester.

Moseley’s advisee Rachel Fehr ’16 is researching food security and nutritional impacts of women gardening in Botswana. She said of Moseley in an email, “Bill is a great source of support because there is always an important factor I may be forgetting (water scarcity, market access, etc.) but he really has a comprehensive view of all the factors influencing food security in a given context. He was also simply fun to travel with because he never gets tired of answering my constant questions about everything we see!”

“[Moseley’s Geography of Africa class] totally changed my perspective of the world,” she added. “It’s the reason I am an African Studies concentrator and the reason I studied abroad in Africa.”