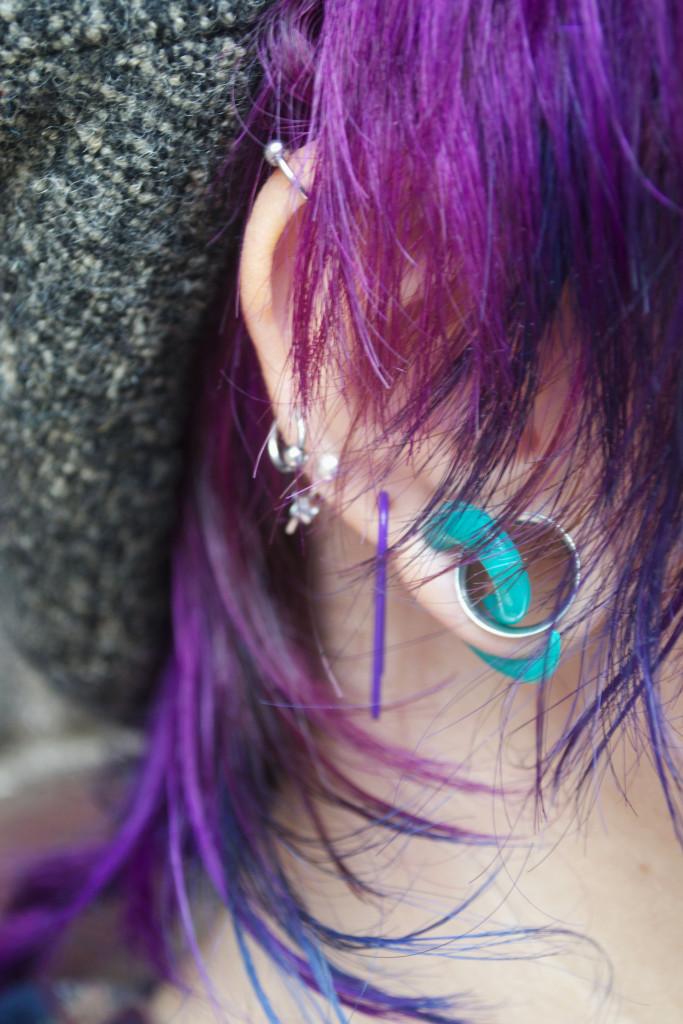 The Mac Weekly sat down with Ollie Schminkey ’16 to discuss their self-described alt-style.

TMW: How would you describe your style? OS: Probably… trans goth kid meets 1950’s housewife meets whatever the DIY/dyke punk scene is doing? Yeah, I’ve noticed you have a lot of variation in your style? I just kind of do what I like.

Do you remember when you first starting choosing your own clothes? I do; there was a lot of pushback. When my mom dressed me as a little kid, she dressed me in whatever little girls in the 90s were wearing. I dressed like a quote-unquote normal kid until probably about eighth grade when I started dating boys and listening to scary music. And then it changed and there was a lot of pushback from my mom. I was the only kid in my school who was quite that weird; I went to a very small school. I was also a Catholic goth which was really a unique experience.

How has your style evolved? I feel like my style has a lot to do with my gender. I was a goth kid growing up in high school – of course I didn’t call myself a goth kid or a scene kid in high school because when you’re a scene kid you’re too creative to call yourself one. But I made a lot of my own clothes. I still make a lot of my own clothes, but I was a lot more goth back then. I wore my makeup in huge things all over my face which was very fun.

And then I got to college, and my first year of college I dressed similarly and then it got to be too much work. Then I came out as trans and I was interested in experimenting with more “masculine” clothing. There was a period in my second year when I purged all of my “femme” clothes and almost bought an entirely new wardrobe, which is very expensive and anxiety producing.

Now femme stuff is creeping its way back in, and also I broke down last year and bought a flat billed hat; I call it my douche hat. Whenever I wear it I’m automatically more douchey and bro-ey. Right now my style is a lot of mixes of things. I usually like to have something stereotypically considered feminine and stereotypically masculine in every outfit I have because it helps me feel balanced.

As a trans person, do you feel that style boxes you in or frees you? There’s some stuff that’s shitty, like the fact that society feminizes and womanizes my identity so much. If I want to wear something “feminine” I’m going to get misgendered all day long. But that happens anyway. So for the most part it’s really freeing. Most of my friends are trans and/or queer, so style is a shared culture in a way that I wasn’t expecting. There’s certain trends, bow ties are a huge thing. They’re totally a fad but I still love them unapologetically.

There’s also something about being in trans spaces specifically where it doesn’t matter if I wear a dress because most people like dresses because femininity is great. It’s just not a thing because I don’t have to deal with all the cissexism that I normally deal with, which is real nice.

How do people at Macalester respond? Macalester is really weird because no one really comments on your body but I’m one of probably two alt people that I’ve seen on campus my entire time going here. It was really weird because I kind of had a community of people who dressed and looked like me in high school, then I got to Macalester and there was no one. Even though there’s not one strictly homogenous style, there is this clean, old fashioned thing. People wear these little leather boots that remind me of the East Coast.

Tell me more about making your own clothes. Mostly I make dresses. I made a button up recently. I spent like 20 hours making this button up — and then it was too small. I might just wear it open. I also made one of my prom dresses for high school — it was this high-necked Victorian gown with long sleeves. It was rad. For a long time I wanted to be a fashion designer or an interior designer, but now I’ve kind of given up. I joke about it with my partner; I’m like, “I can’t do anything straight and that includes sewing.” I’m not a perfectionist enough to be a professional tailor. Mostly I make stuff that I can’t find.

Tell me about your piercings. My first piercing was when I was about seven, then I started doing them by myself when I was thirteen. I went and invested in some hollow needles and some rubbing alcohol and now I do all my own piercings. I feel like piercings are really important to me not only because they’re a part of alt culture but also because I feel like they are a sign of authenticity to myself. For me, body modification is one of the ways that I come into being with myself, if that doesn’t sound too pretentious. It’s a form of self love.

What about your hair? I also cut and dye my hair myself. For a long time I just died it black because that’s what I was into. I’ve had red, turquoise, fade from black to copper, orange, purple — so at least six or seven.

Do you expect to keep your style in the future? I feel like there’s this thing where people are supposed to grow out of being alternative or having piercings, but I think I might actually end up being a tattoo artist so I can keep mine. Especially since my body mods and my style are so much a part of my gender, I don’t see them going away unless the way I feel about my gender changes significantly. I don’t really foresee that, but shit’s fluid.