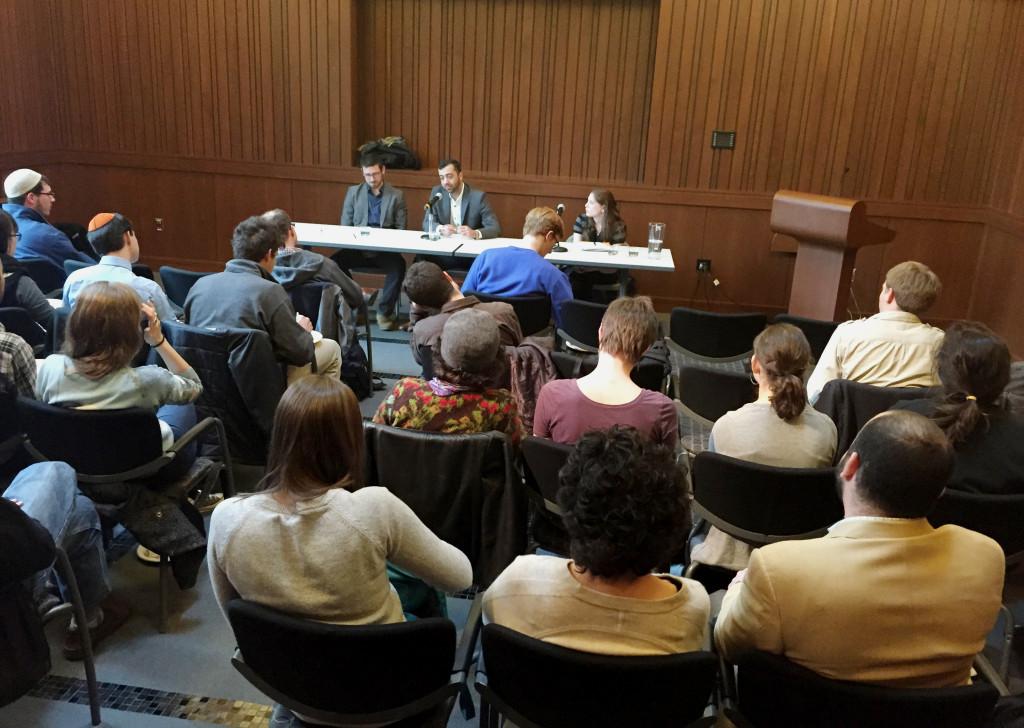 Lior Frankienstzajn and Walid Issa speak at the event. Photo by Joe Klein '16

The “Difficult Conversations” event was initially brought to campus by the Macalester branch of J Street U. According to Heather Renetzky ’15, a J Street U co-chair, J Street U was approached by outside organizations that were bringing this event to college campuses and they were encouraged to reach out to other groups on campus. Accordingly, they reached out to MacSUPER (Students United for Palestinian Equal Rights) and the Department of Multicultural Life, and asked them to co-sponsor the event. Both groups initially said yes.

“This event was brought to our attention, and we thought it would be a great event to bring to campus to add to the voices on campus, to add a different voice,” Renetzky said.

MacSUPER addressed this in an op-ed in last week’s The Mac Weekly authored by Jacob Bessen ’17, a member of MacSUPER. The editorial said that “MacSUPER’s association with certain events was offered as a reason for the exclusion.”

Another board member of MacSUPER attributed their exclusion to a blog post that MacSUPER had written in 2009, which the JCRC found objectionable.

In a later interview, Bessen disputed this narrative, saying MacSUPER was left out of the loop and the JCRC’s objections were not communicated to them properly.

“We weren’t told what the criteria [for our inclusion were] or how we didn’t fit in. We’ve been really kept out of the loop. I know that every time I try to put two and two together, I’m prevented to because everything is based on assumption,” Bessen said.“There’s this huge imbalance of power on trying to tell this story because we don’t have access to information.”

Renetzky said that J Street U was also not completely aware of the JCRC’s actions, saying that they “did not communicate with us that we were supposed to check in directly with the speakers weeks in advance about co-sponsorship.”

After MacSUPER’s invitation to co-sponsor the event was rescinded, the Department of Multicultural Life withdrew their sponsorship as well. According to Dean of Multicultural Life Chris MacDonald-Dennis, the DML could not endorse an event that silenced the opinion of student organizations.

“The reason for us was an outside group [came] in and [told] a student group who they can ask to co-sponsor,” MacDonald-Dennis said. “It goes against everything we’re about … academic freedom is really big here. People really want to hear different things. Just inviting people doesn’t mean that I have to agree with them.”

After the DML withdrew their sponsorship and MacSUPER was asked to remove itself from the event, the President’s Office stepped in and offered to fund it, so JCRC would not have a role in it going forward. When the event actually took place on Tuesday, the only two groups that were listed as co-sponsors were Macalester College and J Street U.

Despite JCRC’s official removal from the event, the two presenters that spoke at the event also had concerns about speaking at an event with MacSUPER’s name on it, which led to MacSUPER still not being allowed to co-sponsor the event.

Before the event, MacSUPER members stood outside of Davis Court, where the event took place, and handed out brochures explaining MacSUPER’s statement on their exclusion from the event. The brochure listed organizations that stood in solidarity with MacSUPER, and a timeline of events that led up to this conflict.

“The real only way we have to stand up to it is campus solidarity, whether through other organizations or individual students coming together and interrogating the narrative that is being presented to them,” Bessen said. “It’s very hard to play ball in this game. The game is a system where our only ability to win is to reject the system. If we don’t, we lose the ability to tell our own story.”

The event itself took place on Tuesday at 4:45 p.m., to an audience of approximately 60 people in Davis Court. The two speakers — Walid Issa and Lior Frankienstzajn — introduced themselves and began to share their stories. They discussed their backgrounds, and how the Israeli-Palestinian conflict was intertwined with their lives and worldviews growing up. Both Issa and Frankienstzajn were part of New Story Leadership, a program where Israeli and Palestinian students come to Washington D.C. to live together and take part in joint leadership programs.

They discussed their different cultural backgrounds, and differences they were first exposed to when taking part in New Story Leadership. Despite their differences, they said that they have, at their core, common goals.

After taking questions from the audience, Renetzky, who moderated the two speakers, brought up the controversy over MacSUPER’s exclusion. Issa blamed miscommunication and a misunderstanding between all groups organized in planning.

“I want you to be fair. It’s important for me not to underestimate my love and passion for Palestine. The case here is only miscommunication,” Issa said. “[MacSUPER’s sponsorship] was not matching my deadline. I’m glad you were here, but I wish you guys were more organized.” Issa’s comments were aimed directly at MacSUPER members in attendance.

“I don’t see how it could be a valuable discussion if you had presuppositions about a Palestinain organization you didn’t want to talk to,” a MacSUPER board member in attendance said in a later interview. (Editors’ note: at their request, the names of some individuals have been omitted to protect their privacy.) “The event isn’t what it is. If you’re claiming it’s a conversation, you should be able to include everyone in it, but they didn’t.”

Jacob Kraus ’15, another leader of J Street U, closed the event by issuing a call to everyone in attendance: instead of speaking over one another with different opinions on the conflict, speak to one another.

“I think that’s the most important thing. The dialogue doesn’t end here, but we can move past the controversy of this event in order to produce a positive platform to build on,” Louis Hunter ’18, a co-chair of J Street U, said.