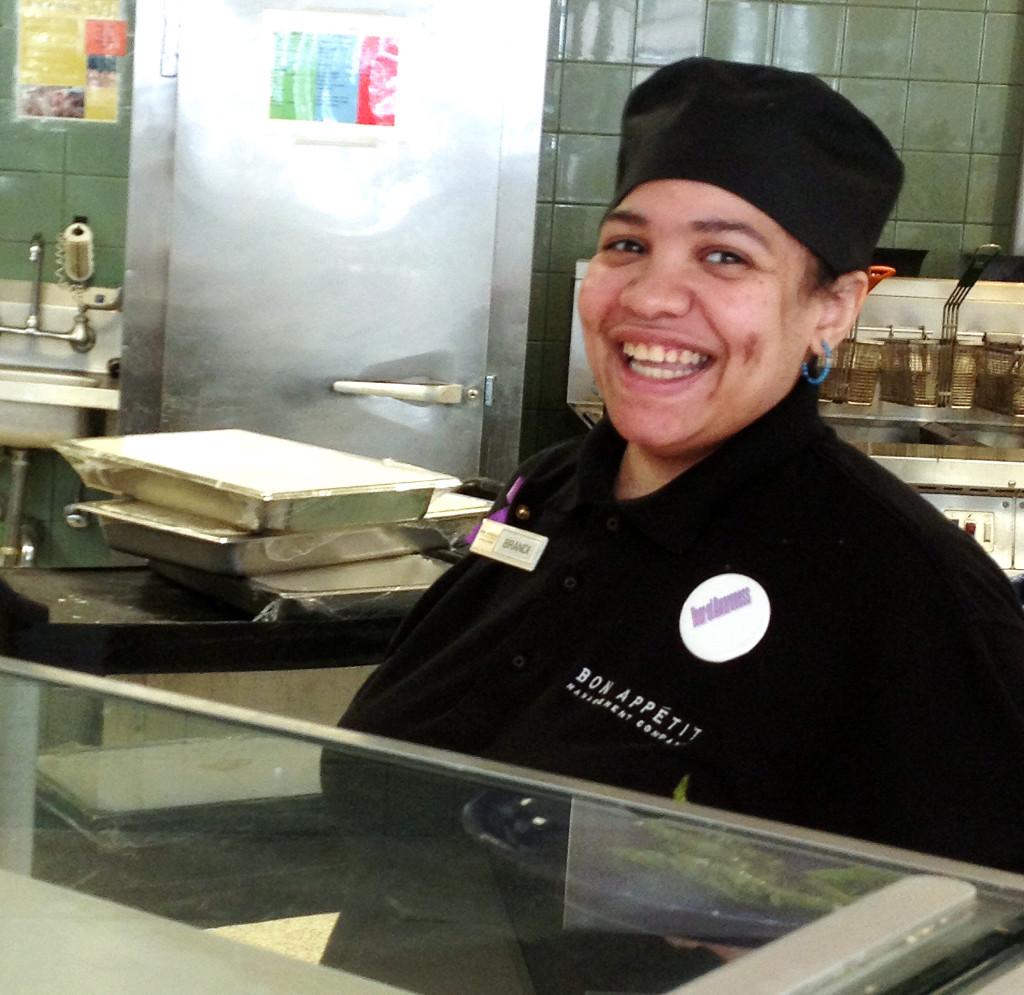 Brandi Anderson serves lunch every Monday through Friday from behind the counter at the south side of Café Mac. It varies from day to day — there are usually rice and beans involved — but rarely can she anticipate what will be served from one day to the next.

Two things consistently served for lunch at South are “I gotchu lovebug” and “Have a good day sunshine,” two of Anderson’s most common catchphrases. As students pass through the line, she greets each one with a smile and a happy quip. She is known for brightening the days of every student she serves.

Anderson has worked at Café Mac for 14 years, employed there since she graduated from Humboldt High School in 2001. A smile has been glued to her face ever since, and she constantly enjoys the company of her family.
She faces adversity with the same positivity every day and, by that rule, lives a life of undeterred happiness. Anderson does more than serve food at Cafe Mac. “When you guys are feeling sad, I always tell you not to,” she said. “You guys can do anything in this world.”

Anderson was born in Saint Paul in 1982. Growing up, she lived in a big home and was one of seven siblings: four sisters, two brothers and herself. Her mother, from Manchester, England, was a nursing assistant. Her father was rarely present and as she remembers, “He was more of a friend than a dad.” As such, her mother also played a paternal role in the household.

One of Anderson’s sisters has lupus, an inflammatory disease in which the immune system attacks its own tissues, and throughout her life Brandi has supported her. Anderson calls her sister her twin because they have similar dimples.

With her family, Anderson’s favorite childhood activities were playing Monopoly, Mario Brothers and spending time outside.

After graduating high school in 2001, she was referred by one of her teachers to a job with Bon Appétit at Macalester. She had always envisioned herself in a cafeteria. After taking the summer off after her senior year, she immediately started working in Café Mac in the fall. “When I got the job,” she said, “I was happy and blessed.”

Today, Anderson lives in Little Canada, a short distance north of Saint Paul. She takes Metro Mobility to work everyday, an alternative to the normal buses, which she says are too dangerous.
Anderson normally arrives on the Macalester campus around 10 a.m., clocks in around 10:30 a.m. and lets her boss know she’s there. When she’s not serving meals to students, where you will usually see her, she’s cleaning, putting dishes away, wiping surfaces down and putting bread inside bakery cases, among other things.

The relationship she has with her colleagues she says is smooth and easy. “We never argue, we never yell at each other and we stick together,” she said. “We stay together as a family, because our boss is dependent on us.”

Anderson clocks out around 2:30 P.M. and doesn’t come back to do dinners.

In her free time, Anderson likes to watch movies or shows on Netflix, have fun with her mother or play around in the grass with her nieces and nephews, who are three to seven years old. Her favorite movie is a Tyler Perry cartoon DVD that she watches often. But if there are expletives in a movie, Anderson won’t watch it. She says, “If it has swear words in it, I put it back on the shelf. They’re inappropriate and disrespectful.”
Anderson claims to know the secret to being happy in the face of whatever one might encounter. Her words of wisdom have been said before, but seem to have more meaning coming from someone who constantly strives for happiness for herself and others. With certainty she said, “Always hold your head up. Don’t let anyone tell you what you can’t do and always think positive.”

A student whose work-study is at Café Mac walks past and is immediately affected by Anderson’s positive presence.

“How’s it goin’, sunshine?” he asked, quoting one of Anderson’s catchphrases.