The Lao Diaspora Project Refuge of the Invisiblao: A Visual Essay 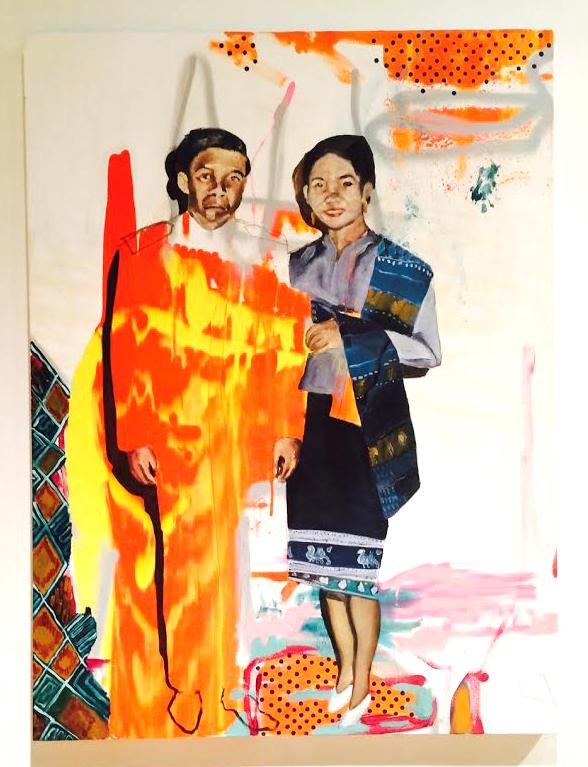 The Vine Art Center in Minneapolis, site of “Refuge of the InvisiLao: A Visual Essay.” The exhibit, on display January 10-24, highlighted art and photos from Lao-American artists in the Twin Cities. Photos courtesy of Minju Kim ‘18

“There is a reason why it is called a Secret War,” said Chanida Potter, Managing Editor of the online journal “Little Laos on the Prairie” (LLOTP). LLOTP is dedicated to providing a Lao perspective in the news in the Twin Cities.

“No one knows that Laos was used as a trash can for the leftover bombs of U.S. military force, leaving Laos the most heavily bombed country in the world,” said Potter. “But we know the truth, and we remember.” Potter is the brain behind the exhibition “The Lao Diaspora Project: Refuge of the InvisibLao, a Visual Essay”.

Potter came up with the idea for the exhibit and served as the curator.

The exhibition, done under LLOTP, was displayed from January 10th to 24th at the Vine Arts Center in Minneapolis, MN. It was held for the 40-year anniversary of the end of the Civil War and in memory of the diasporic Lao who immigrated or were expelled to Western nations. The exhibition was in collaboration with neo-expressionist Lao-American artist Chantala Kommanivanh, who created the paintings based on the past photos submitted by the Lao diaspora.

I asked Potter how LLOTP came to be, and how she came up with an idea of holding an art exhibition about the issue.

“The whole thing started and grew organically,” she answered. “In 2011, one of my friends and I started a blog about Lao American life. It was almost a personal journal, reflecting on our lives and experiences of living in the U.S. As time passed, there were more people who related to our stories. The blog became an online magazine, and I thought an art exhibition would be a great place where people could share their pieces of memories and form one Lao identity together.”

As Potter had hoped, the exhibition resonated with the stories of the Lao diaspora. The exhibition was divided into three parts.
Set One: The Remix was composed of paintings by Chantala Kommanivanh, whose unique style of painting caught viewers’ attention. Kommanivanh used mixed medium on various types of canvas. The officer and his wife serves as a great example of his painting style. His use of vivid color and blunt figure resembles graffiti, which he identifies closely with. “On-the-street kind of art, like graffiti, has been close to the Lao who had to live a rough life,” said Potter.

Another unique feature of The officer and his wife is the background, which does not imply any specific time or location but is covered by paint swatches and dots. If you closely look into Kommanivanh’s other paintings, you will notice that the people depicted are mostly expressionless. Their emotions are indecipherable, blurred behind rigid faces and distant gazes. It is gloomy to stare at their faces for a long time. However, this is why the exhibition is so real, without any veil to cover the truth.

Set Two: Red, White and Sticky Rice constituted of stories and photos from Lao community members. This was a unique feature of the exhibition, since it fostered an active communication among the Lao community of the Twin Cities. It encouraged the group to share their memories and their experiences. Lastly, Set Three: Living Among Dreams was from Chanida Potter herself, who went to Laos in an effort to collect stories from Laos and bring them to to the U.S.

“Lao Diaspora Project: Refuge of the InvisibLao, a Visual Essay” was a significant exhibition. It not only functioned as a medium to uncover the hidden history of the Secret War, but it also promoted active conversation among the local Lao Americans.

As I was interviewing Potter at the gallery, several people came by and told her that they were thankful for the exhibition and that they could relate to many of the stories portrayed. It is amazing to think that art can bring out the common emotions from people, and connect them into one identity. The exhibition suggests that not only for the Lao diaspora, but for many populations, a platform to share their stories is necessary for the group’s well-being.
­
For more information, visit littlelaosontheprairie.org/laodiasporaproject/