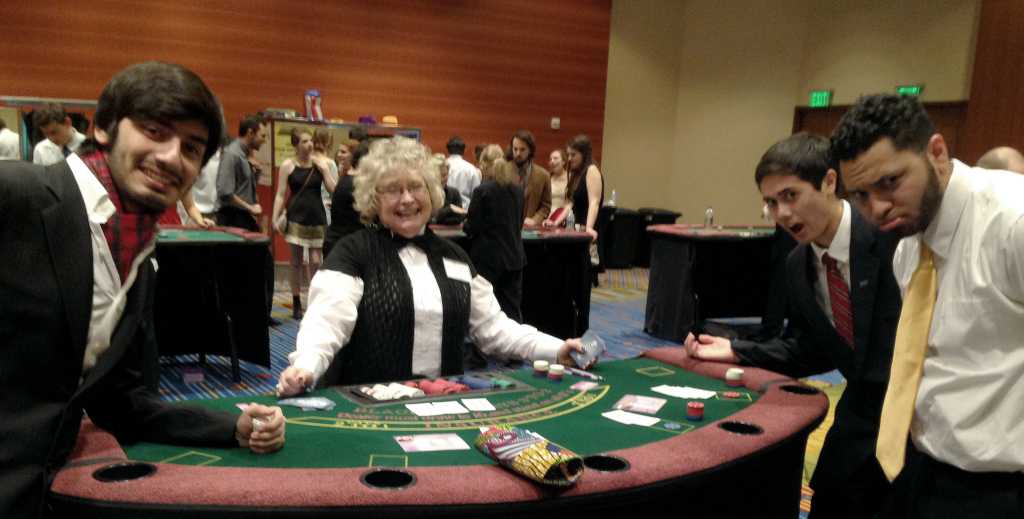 Winter Ball this year brought many changes, including a casino section and photo booth. Photo courtesy of Alexx Harley'15.

Changes implemented for the 2014 Winter Ball, which included an earlier start and end time, bus loading times designated by ticket, and a new host system, were successful, with fewer problems reported than in past years.

The Marriott City Center Hotel, which hosted this year, said this event ran more smoothly than the Winter Ball they hosted in 2012, and they would be willing to have us back for future events.

“Overall this Winter Ball was the best that I’ve seen, and this was my fourth year going,” said Suresh Mudragada, Assistant Director of Campus Activities and Operations. “Student behavior was overall much better this year in comparison to previous years, [and] I think the changes implemented this year contributed to that.”

This is an improvement from the response of last year’s venue, the Crowne Plaza Hotel in Downtown St. Paul, which did not invite Macalester back.

Though the event used every coat rack the City Center had available, it ran more smoothly than previous years which let students spend less time waiting for coats and buses.

“Compared to previous years, the waiting time for bus loading and coat check was way shorter. We made several changes to streamline these processes though,” Program Board chair Sana Naz ’16 said. “Coat check was based on alphabetical order, and tickets had specific bus times and were color coded.”

Positive feedback was heard from students and volunteers alike.

“I had my suspicions that the change in time from earlier years was a measure requested by the venue to prevent disruptive or destructive behavior,” Tristan Wrosch ’15 said. “I expected that it would somewhat hamper the experience, but I found that my experience, though not phenomenal, was not hampered by the time per se.”

The addition of the casino section and additional photo booths was well-received by students.

“It’s nice to have a space for people to chill if they don’t want to dance, although the vast majority of students were dancing,” Mudragada said.

“People seemed happier and more lively than last year when they were dancing,” Allison Stahr ’17 said. “I liked having it earlier, because I like going to bed early.”

“Overall there was better behavior, but there were still students that went beyond their limits,” said Mudragada. “I want to make sure people have a fun but also a safe night out. Winter Ball is a treat. Not a lot of institutions host events like this, and a lot of planning goes into these events, and we just want people to enjoy themselves.”

There was no stark increase in ticket sales this year, as 1,312 tickets were sold. Therefore, $1,312 was donated to The Advocates for Humans Rights, this year’s chosen partner organization.

The community partner is chosen in connection with the Civic Engagement Center and the theme of the International Roundtable.

Winter Ball hosts were required to check in with staff and volunteers at the event midway through to report things they noticed throughout the night. Hosts received a free ticket, were trained the Friday evening before Winter Ball, and were required to arrive on the first bus in order to get a venue tour.

“I really appreciated them for taking the time in their night to help us in this way,” Mudragada said.

In the future, bus loading may occur in a more condensed time frame.

“I think the bus times will change a little, so busing can happen in a more concentrated time,” Mudragada said. “It would be great if we can do it within an hour [or] an hour and fifteen minutes; this year it took place in 90 minutes.”

The Marriott would only recommend increasing the size of the dance floor for the event, since it was too small to accommodate all those in attendance. Additionally, hors d’oeuvres served at the venue ran out earlier than anticipated and this was a common complaint heard from students.

“People ate like it was Café Mac, and if you eat like it’s Café Mac there isn’t going to be enough food for everyone,” Mudragada said. “Something we are going to change is having more food in Janet Wallace so students won’t go in thinking they are going to get dinner. We just don’t have the money to make it a dinner.”

“I believe that the earlier time change encouraged those who came to the event earlier to eat more, because some students might have skipped dinner,” Naz said.

Winter Ball was approximately $5,000 more expensive than last year because of the casino night, the additional photobooths and higher food prices.

The total event cost about $39,000, but with the exchange of ticket sales the event cost between $30,000 and $35,000. The remainder of the funds came from the Student Activity Fee.

Eleven students arrived on the bus that brought students from the Macalester playoff football game.

“I think the changes were very beneficial,” said Megan Renslow ’15, one of the Program Board Traditions Coordinators. “The bus system was efficient, the hosts provided extra security, the casino gave students who did not want to dance an opportunity to still participate in the event, and the earlier start time did not dampen any of the fun but only increased student safety. Of course, the event couldn’t have gone so well without student, faculty and staff volunteers.”

Natalie Kronebusch ’17, the other Traditions Coordinator, agreed with Renslow.

“It seemed that the changes made contributed to a healthier and generally more fun atmosphere for everyone that attended,” Kronebusch said.

Three hundred students attended the after party in the Loch that occurred from 10 p.m. to 1 a.m. The party was hosted by Campus Activities and Operations, and included Toppers pizza and other prizes.

“I think there is a future for Winter Ball,” Mudragada said. “I would love to see it back in St. Paul … It would help us save on busing and avoid Minneapolis traffic. We are going to look into some new venues.”