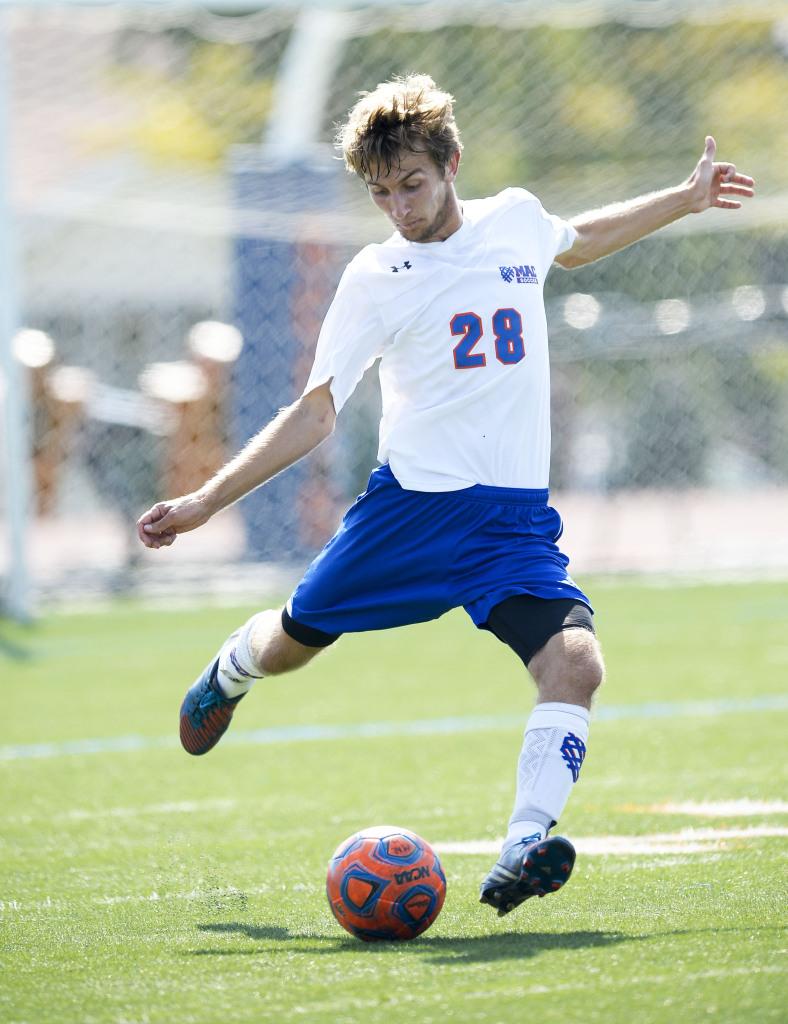 Robert Tomecek'17 was a big part of the Scots improved defense.

The Men’s Soccer team ended its first playoff run since 2010 in a 2-0 loss to St. John’s Tuesday. Finishing 11-6-2 in the regular season, the Scots gave Head Coach Gregg Olson his first winning season and playoff berth since his arrival in 2012. Although the season ended in disappointing fashion, such a strong performance in the MIAC suggests that 2014 was a turning point for the program.

The Scots’ 6-3-1 conference record owes thanks to the nine shutouts recorded by goalkeeper Zeke Vainer ’17. Olson credits this statistic not just to Vainer, but to a shift in defensive attitude: “Our team defense, and I don’t just mean the back four, has been awesome this year. And that’s a credit to the guys who aren’t even on the field because the product in practice has been up to the highest level of the MIAC,” he said.

Flashier than the Scots’ strong defense was their trend of producing last-minute winners. Leading goal scorer Austin Burrows ’17 and co-captain Cole Erickson ’15 led the Scots with two game-winning goals each. Danny Baumann ’18 initiated the season of late heroics when he scored on a header off a corner kick in the 89th minute against Augsburg in late September, a moment which Olson and co-captain Alan Schembri-Wismayer ’17 both noted as 2014’s foremost highlight. “The whole team went nuts and it gave us the confidence to compete against any team,” Schembri-Wismayer said. Olson noted that the Augsburg game was momentous for the team’s confidence. After the game, “I think the whole team felt like we could beat anyone,” Olson said.

The Scots’ three captains, Erickson, Sam Finegold ’16 and Schembri-Wismayer, were tasked with managing an influx of talented first years. According to Olson, due to Finegold’s injuries and Schembri-Wismayer’s quiet style of leadership, Erickson became the team’s major voice. “Cole’s leadership is in his communication. Without it, we’re a different program. He’s able to see things that the younger guys just aren’t seeing yet,” Olson said. “It’ll be about a year before we can get a guy up to Cole’s level, who can see the game [unfolding] so quickly,” the coach added. Another achievement of the captains was ridding of a culture divided by class year, an instrumental step toward healthy communication for such a young squad.

With the first years came a degree of depth which Olson’s teams had never before enjoyed. “We have a lot of young guys who are getting a lot of playing time and are pretty darn good,” Olson said. Schembri-Wismayer noted that the first years forced returning players to compete for their spot on the team, giving confidence to both new and veteran players. Wilson Merrell ’16, who played sparsely throughout the season but scored the second goal in the final regular season game against St. Mary’s, is an example of the talent that cannot fit into the starting lineup because of the abundance of qualified players. Most importantly, this newfound depth and the technical ability of the first years has allowed Olson to institute a possession style offense. The first years’ increased confidence by the end of season allowed Olson to start three at midfield for last Saturday’s regular season finale.

Schembri-Wismayer gives credit to Olson for the Scot’s marked improvement from last year. “He’s the brains behind our team, always finding problems we need to fix, and fixing them through practice,” Schembri-Wismayer said. Olson, on the hand, praises his staff of assistant coaches for the positive changes.

Tuesday’s playoff defeat was Macalester’s second loss of 2014 to St. John’s. Although the Scots entered the contest knowing they could beat St. John’s, two goals, one in each half, courtesy of St. John’s’ Rocky Harmon, were too much to overcome. “I think there was a sense of pride that we made it to the playoffs for the first time in four years, but in the moment after a loss, it’s hard to not only look at the result and feel upset,” Vainer said.

Regardless of Tuesday’s outcome, the regular season provides a tremendous amount of momentum for the program. “This season gives guys the confidence that the work they’re putting in during the offseason has its benefits,” Olson said. Schembri-Wismayer agreed: “We’ve proved we can make it and we have the fight and confidence to keep making the playoffs for years to come,” he said. Following a year of consistently competing closely with higher ranked opponents, the Scots have proven that the MIAC has a new, serious contender.