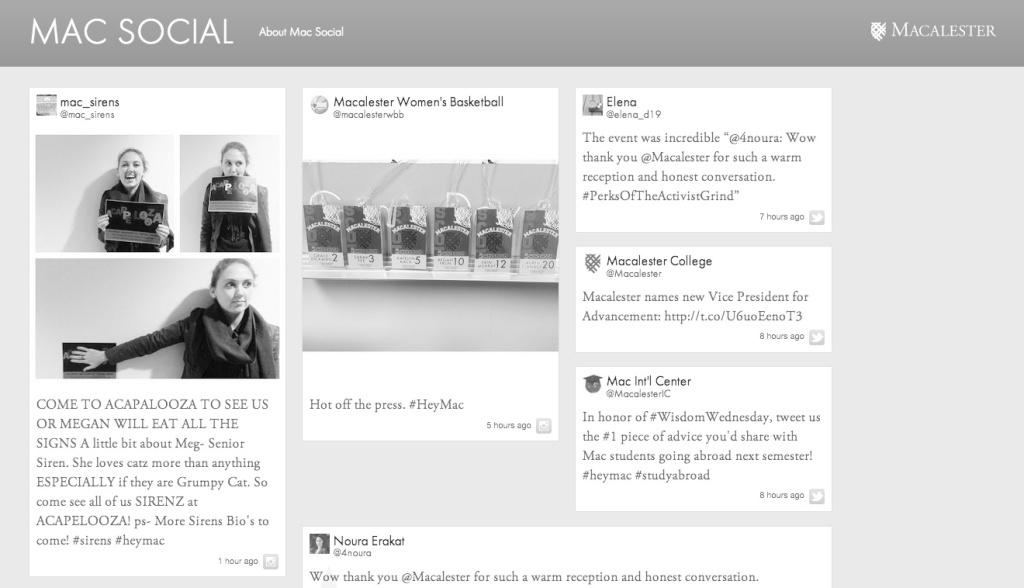 The idea began at a conference last year, explained director of Web Services Sara Suelflow. She said she noticed other schools had similar social media sites.

“Mac Social allows us to showcase all of this content that’s being produced about the college,” Suelflow said. “It brings it into a format that we can see.”

Asad Zaidi ’15 said he likes Mac Social and uses it about once a week. He has gained followers on Instagram, including students, the Macalester Orange and the Campus Center. Anyone in the Macalester community can participate in Mac Social: current students, prospective students, alumni, faculty, departments, student organizations and parents. Sometimes students try to use the hashtag on Facebook, but Mac Social cannot pull content from Facebook because of privacy concerns. Zaidi said he wishes Facebook could be integrated into Mac Social since he checks Facebook all the time. Going onto the Mac Social website adds another step.

“You have to intentionally go see what’s happening instead of it coming to you,” Zaidi said.

But since Mac Social can provide a lot of visibility, he suggests people use it to advertise events. As the social media specialist, Rachel Peterson monitors Mac Social, checking for duplicates or fuzzy pictures. Peterson also hopes for more involvement from student organizations.

“We get a lot of pictures of a beautiful fall day or a big football game because there are a lot of people there,” Peterson said. “But we would like to see what’s going on all around campus.”

Alisha Roopchand ’15 has not used the hashtag herself but found the use of #heymac interesting during the mock border incident in early October.

She sees Mac Social as a way for the institution to boost popularity and public reception of Macalester beyond the immediate community.

“It was interesting to see students challenge that and use it to actually criticize the institution,” Roopchand said.

But whether for protest, community-building or celebrating a beautiful day, Peterson wants the students to take ownership of Mac Social.

“They can provide the content for this,” Peterson said. “There’s so many stories around campus and I’d love to get as many on here as possible.”