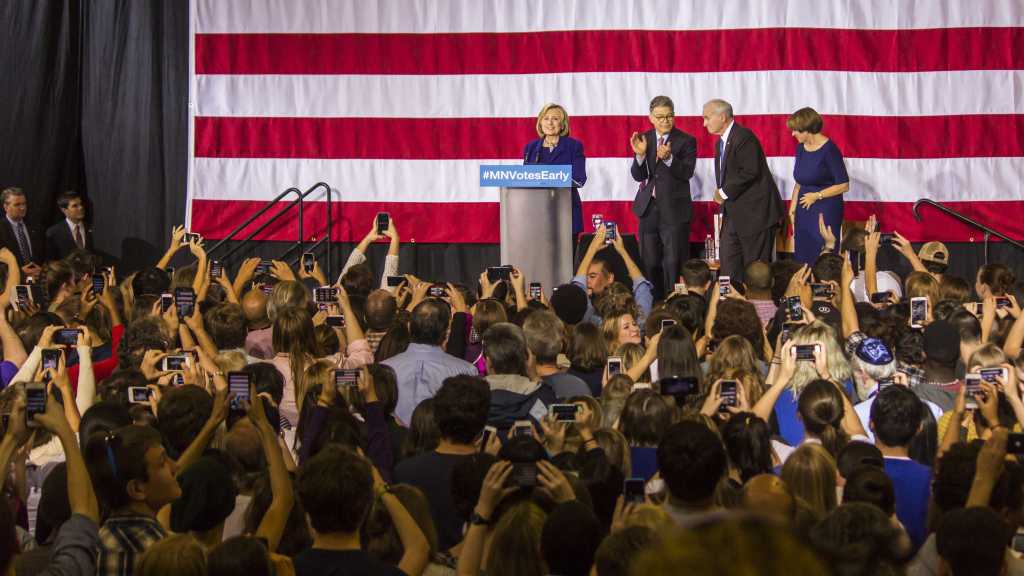 A crowd of nearly 2,000 people packed the Leonard Center Field House on Oct. 23 for a Get Out the Vote rally in support of Minnesota Democrats up for reelection this fall. The rally was headlined by former Secretary of State Hillary Rodham Clinton.

A plethora of Minnesota politicians spoke before Clinton, reiterating the importance of voting early, getting others to vote, and voting for people who will fight for issues important to members in the audience. Among those who made an appearance prior to Clinton’s speech were St. Paul Mayor Chris Coleman, State Representative Erin Murphy, U.S. Senators Amy Klobuchar and Al Franken and Minnesota Governor Mark Dayton.

After speeches from local politicians, a recitation of the Pledge of Allegiance and an opening convocation, Klobuchar started things up by speaking about the progress that has been made in Minnesota over the past few years, attributing these changes to strong leadership. While this was met with excited cheers from the audience, Klobuchar reminded those in attendance that “progress is not just something that you’re proud of — progress is something that you have to build on.”

Dayton and Franken, both of whom are up for reelection this year, followed Klobuchar. Both solicited votes for themselves as well as other members of their party. Dayton spoke of the importance of having a DFL majority in the Minnesota legislature to work with, stressing that without legislative support, his power is limited.

Dayton also spoke of all of the progress that has occurred during his time as governor with a DFL majority in the legislature, including a raise in the minimum wage, marriage equality and an increase in student financial aid.

After a supportive introduction from Dayton, Franken took the stage to speak about his own re-election campaign and to introduce Clinton. Looking out into a crowd dotted with signs bearing his name, Franken encouraged people not only to vote, but to vote early and to volunteer for DFL campaigns. Franken restated issues he was fighting for, such as access to contraception, reducing student debt and fighting the adverse effects of climate change. After pepping up the crowd, Franken then turned the microphone over to Clinton.

Thunderous applause and cheers welcomed Clinton to the stage. She praised Franken and Dayton for helping turn the state around after the economic recession, pointing to Minnesota’s increase in jobs, the decrease in the state’s unemployment rate and the creation of a budget surplus that occurred while they were in office.

“What you have accomplished in the last years since our terrible economic crisis is a real model,” Clinton said. “Thanks to the hard work and resilience of the people of Minnesota, and the emboldened and determined leadership, Minnesota has turned around.”

She went on to point out that, at 3.6 percent, the Twin Cities now has the lowest unemployment rate of any large metropolitan area in the United States.

In addition to celebrating the economic progress that the state has made under current leadership, Clinton also spoke about the progress that has been made in Minnesota when it comes to social equality, which included the Women’s Economic Security Act and same-sex marriage.

“Every Minnesotan finally shares marriage equality, no matter who they are,” Clinton said.

“You have two great candidates here,” Clinton called out to the crowd. “Mark Dayton, a governor who always puts Minnesotans first [and] Al Franken, a senator who fights for you every single day in Washington.”

During the rally, Dayton, Franken and Clinton all spoke of another thing they’ve come to have in common — being first-time grandparents. Franken jokingly offered to spend the rest of the rally showing pictures of his new grandson, Joe, and both Dayton and Clinton shared their excitement over their new grandchildren as well. Clinton summed up the shared sentiment by saying that being first-time grandparents has made all three politicians “more energized about doing everything [we] can to make sure that every single child has the opportunity to live up to their potential.”

Many of those who spoke at the rally also recalled growing up working class and still having a shot at the American Dream, something they hoped to make accessible for future generations strengthen and restore. After talking about the economic growth of the country over the past years, Clinton added that she thinks we can do better.

“Of course we can always do better,” Clinton said. “We want to make sure that every family and every worker feels the reward of economic recovery. Too many people are working harder than ever, but maintaining a middle class life, or getting into the middle class can feel like pushing a big boulder up a hill every single day.”

Although Clinton made no mention of intentions to make a bid at the White House in 2016 during the rally, Dayton told members of the audience that “I offered to support her run for the presidency in 2008, and I hope I’ll have the chance to do so again in 2016.” This statement was met with resounding applause from the crowd in the Leonard Center.

Above all, the most commonly repeated message at the event was to show up at the polls.

Clinton echoed his messages. “The question really is are you going to tune out or turn out? Are you going to be there to vote for accomplished leadership or not?” Clinton said.

At the end of her speech, Klobuchar drove home the point about why voting in this election is so important.

“Why do you have to vote? You need to vote because there are people out there who don’t want you to vote,” Klobuchar said. “There are people who have actually spent millions of dollars…trying to pass voter suppression measures all over the country. They’re trying to get people so disgusted that all you want to do is stay home. I say it’s time to send these people a message. There is one sure way to send them a message so that they remember for a long, long time — with a ballot. It is time to join a nationwide march to the ballot box to tell these guys that you cannot buy the votes of the people of Minnesota, you can not buy the votes of the people of America, [and that] this country is not for sale!”