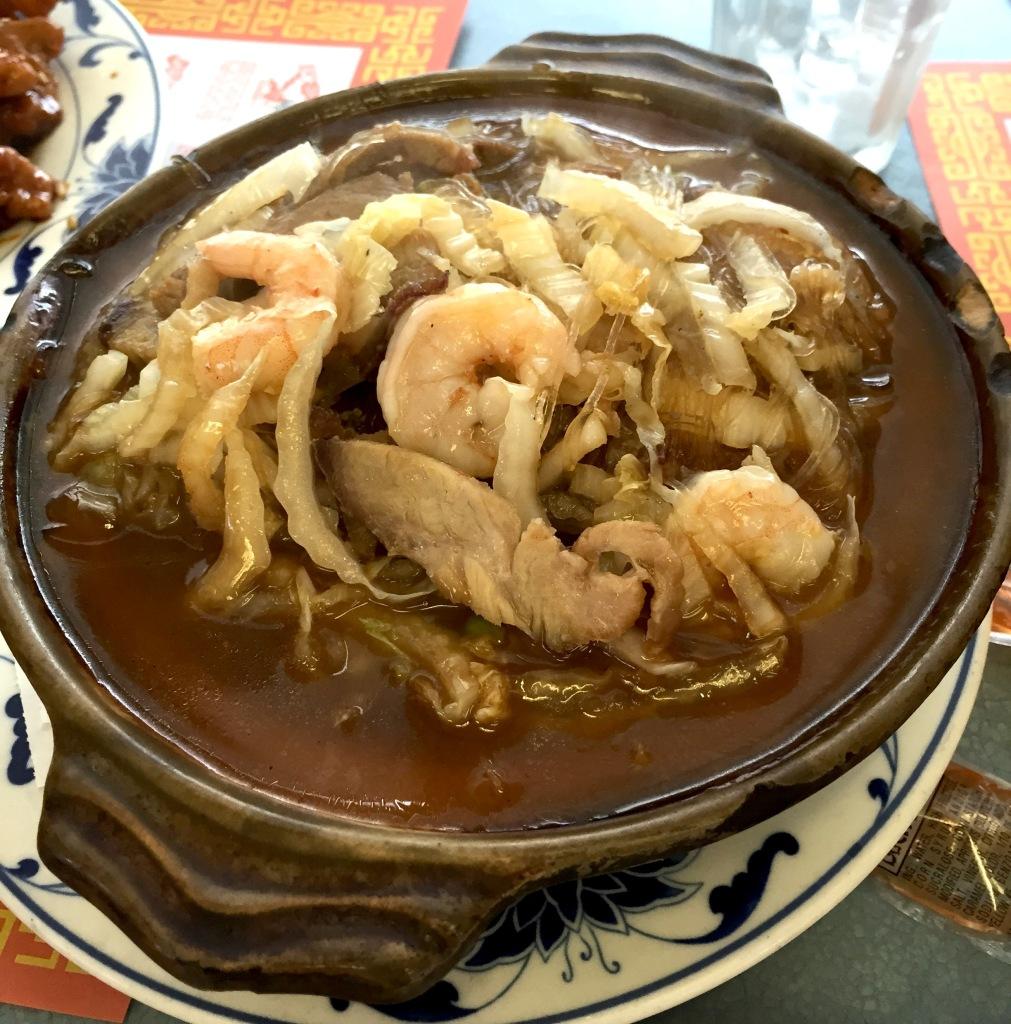 The vermicelli, pork and vegetable hot pot is a must. You can also find vegetarian hot pots at Kowloon. Photo by Ben Schwed'15.

For Macalester students looking to go to downtown St. Paul or Minneapolis, Metro Transit’s Green Line is now the most convenient way to get there. Since this past June, the Green Line has run along University Avenue between the two downtowns. With frequent 24-hour service, clear announcements and clean cars, the Green Line is a great and easy way for Macalester students to get around the Twin Cities, despite the sometimes frustratingly slow rate of travel.

A few steps away from the University Stadium stop on the Green Line, in a small strip mall, sits Kowloon Restaurant, named after the urban area in Hong Kong. From what your well-honed food senses have taught you over years of exploration, this restaurant might be a bit foreboding. A tiny Chinese restaurant, in a little strip mall, by a major stadium, on the grounds of a large university—seems like the ultimate place to serve low quality, greasy fried Chinese-American food to drunken University of Minnesota students.

However, it turns out that this little gem packs a disproportionately large punch. I ventured to Kowloon on a recent lovely fall afternoon with two intrepid adventurers by my side. Some have called Kowloon the best casual Chinese fare in the Twin Cities. Though I am not willing to say that yet, I can attest that Kowloon serves some really great versions of their food and without a doubt, is considerably better than any Chinese food that can be found in the immediate vicinity of Mac.

Their tiny façade does not hold any surprises, as the interior of the sparsely but pleasantly decorated Kowloon holds fewer than 10 tables, the majority of them for only two people. Upon walking in, you are faced with two whiteboards, one with their combination specials with foods you are probably well acquainted with: chicken lo mein, sesame chicken, General Tso’s and a few others. All of these come with either fried or white rice and an egg roll or wonton—for lunch that entire combination will cost you only $5.75. For dinner, the price rises minimally to a still extremely reasonable $7.75. Immediately next to that whiteboard is a more intriguing one, with various options all written out in Mandarin Chinese. Although I cannot read a single word of Mandarin, the host/server/waitress was more than happy to explain what all of the options were. Based off of the options that I was told about, that board is definitely a path for the more adventurous eaters out there to travel down.

We started off about as far away from that board as possible with an order of potstickers. It was an ominous start. Although the pork filling was well seasoned, juicy and flavorful, the wrappers were criminally over-fried, producing a primary flavor of bland fried dough. Luckily, the potstickers were easily the low point of the meal, as it only got better from there.

An order of sesame chicken was, unlike the pot-stickers, ideally fried, maintaining a thin, crunchy coating without having overcooked chicken, a trick that is often very difficult to pull off. It was also not overly sweet and sticky, a problem that plagues many sesame chickens. Instead, it was relatively light (it was still fried chicken served with fried rice and a fried wonton), and with a more nuanced flavor. It was not an amazing dish, but it was definitely a very good one.

An even better option was the kung-pao chicken. A seasoned, stir-fried dish of chicken that comes with a variety of vegetables, this dish was light and fresh. The vegetables and the whole peanuts mixed in gave every bite a nice crisp, and the stir-fried chicken was flavorful and well-seasoned. Although the original, Szechuan version of kung-pao chicken comes with Szechuan peppercorns, which are both hot and numbing at the same time, most Americanized versions of the dish do not. This order, without the peppercorns, was extra spicy. If you like spice on your food, I highly recommend it. The spice was not overpowering and did not detract from the flavor of the dish. Instead, it added a new element to the dish, one that was well-executed and made for a more enjoyable meal.

The last thing that we ordered was a vermicelli, pork and vegetable hot pot. A hot pot is a soupy/stew-like dish where a broth is placed on the table and raw meats and vegetables are placed in it and cooked at the table. However, here it came fully prepared with a gluttony of vermicelli noodles dripping in the rich broth, a heaping amount of roast pork mixed in, little pieces of cabbage throughout, and surprisingly, the occasional shrimp. All of these were soaked in the broth and their flavors combined to make a delicious and filling meal. Even with three of us, we barely managed to eat half of it. Although I wish it had been slightly spicier, it was an incredibly satisfying meal and would be even more so on a cold day.

Although Kowloon restaurant is not going to be a place that will rock your world, it is a place that knows what it does and does it well. It is likely most of you have had better Chinese food in your life but I would bet it hasn’t been at Macalester. Kowloon does the Chinese-American classics well, and it does them cheaply and satisfyingly. And it’s easy to get to on the Green Line!