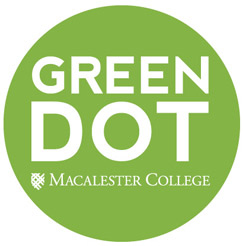 The Green Dot program will be a major component of Macalester's sexual violence prevention efforts, as more trainings are offered to students and staff. Graphic courtesy of Macalester College.

The Green Dot program will be a major component of Macalester’s sexual violence prevention efforts, as more trainings are offered to students and staff. Graphic courtesy of Macalester College.

Although sexual violence still plagues many campuses, all across the country colleges are beginning to devote more time and resources into making sure that it becomes an anomaly. Macalester is no exception. This new semester, one staff member in particular is playing a huge role when it comes to preventing sexual violence. Associate Dean of Students Lisa Landreman is expanding her role in sexual violence prevention in addition to her role in accommodating students with disabilities.

With this shifting of responsibilities, Landreman will now have more time to focus on individual student counseling and coordinating sexual violence prevention, according to Dean of Students Jim Hoppe. Hoppe said that he believes that “this additional time will have a positive effect on the community at large.”

Landreman said that with Ruthenbeck’s promotion, she can dedicate a larger percentage of her time to duties other than disability accommodation.

The Green Dot program gets its name from its use of an interactive college map where community members can report incidences of violence (red dots) and violence prevention efforts (green dots). The goal of the program is to have the green dots on the map far outnumber the red ones, which would indicate the creation of “a campus that won’t stand for any kind of violence and where violence culture is not accepted,” Landreman said.

According to Landreman, Green Dot focuses on being both proactive and reactive. The proactive part of the program aims at interrupting high-risk behaviors that can lead to potentially violent situations, such as drinking in excess and creating campus norms that dissuade violent behavior. The reactive part teaches bystanders to intervene and gives them alternative options to direct confrontation, which may not be the best reaction for everyone. By combining these two aspects of the program, sexual violence can become a less common phenomenon.

Seventeen staff members have already undergone the four-day Green Dot training, which teaches participants to recognize potentially violent situations and gives them the tools and information that they need in order to step in and prevent the situation from escalating.

This training has already proven effective. Landreman recounted the story of one staff member who had gone through the training, and later was able to implement what they had learned while on a bus ride. While they were able to step in and prevent what could have become a violent situation, they later said that before receiving Green Dot training, they might not have recognized the situation as one that could become violent.

Stittsworth said that she believes that Green Dot is “helping people understand everyone’s role in preventing violence of any kind.” Her hope is that the program will empower people to do or say something, instead of doing nothing, when they recognize cues that could lead to potentially violent situations.

Bystander trainings for students, which are eight hours in length, will begin soon.