This Week in Mac Sports 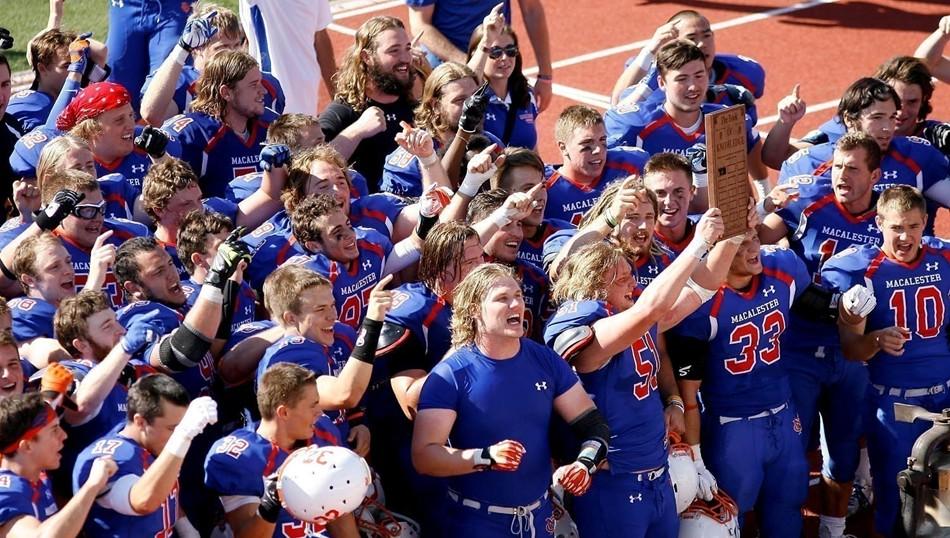 The Scots celebrate their 17-14 victory over the Carleton Knights with the Macalester Stadium Crowd. Photo courtesy of Jody Russell.

GAME OF THE WEEK: Book of Knowledge Back in Macite Hands

In front of Macalester’s largest crowd at any sporting event since September 2012, Macalester regained the coveted Book of Knowledge for the first time since 2002 in a thrilling game that ended with a last-second winning field goal from Michael Abramson ’15. It was only Abramson’s second kick of his collegiate career, but he didn’t let the pressure get to him as he split the uprights with no time left on the clock.

The Orange and Blue led 14-0 midway through the third quarter thanks to rushing touchdowns from QB Samson Bialostok ’15 and WR Sam Bordo ’18, but Carleton was able to come back and the Knights tied the score with 4:08 to play. A big return from Konnor Fleming ’15 gave Mac great field position on the next drive, but a four-and-out gave Carleton the ball near midfield with just under two minutes to go. The Knights drove down the field before Ryan Fleming’s crucial tackle on third-and-three. The Scots got the ball back with 15 seconds to go, and a 42-yard bomb from Bialostok to Hunter Johnson ’16 put Mac in field goal range. A short run from Zandy Stowell ’16 brought the ball to the 20 yard line and set up Abramson for a 37-yard field goal. The rest is history, as players and fans stormed the field in celebration.

The Scots will attempt to defend the Paint Bucket as they travel to Hamline on Saturday night (7 pm) for their second consecutive rivalry game.

ATHLETES OF THE WEEK

Brooke Hunter ’17 was named to the All-Tournament Team of the Macalester Volleyball Invitational, held on September 5-6 in the Leonard Center. The Scots went 1-2 in the tournament, with Hunter at her best in a 22-25, 22-25, 19-25 loss to Division II Minnesota-Morris, in which she had 12 kills, three digs and only two errors.

Cole Erickson ’15 captained the soccer team to wins against Coe, 7-1, and Lake Forest, 1-0, as Macalester hosted the Associated Colleges of the Midwest Showcase last weekend. Erickson scored from corners in both wins, and helped the Scots earn a clean sheet against Lake Forest.

NUMBERS OF THE WEEK

7 Assists for midfielder Alan Schembri-Wismayer ’17 through four games, first in the MIAC. He is third in the conference in shots, with 14, hitting the woodwork on multiple occasions.

15 Tackles for linebacker Ryan Fleming ’16 in the win against Carleton, tying his career high. The Second Team Preseason All-American made a big play on Carleton’s final drive, getting in the backfield to stuff Knight’s RB Andy Gustafson for a three yard loss on third-and-one.