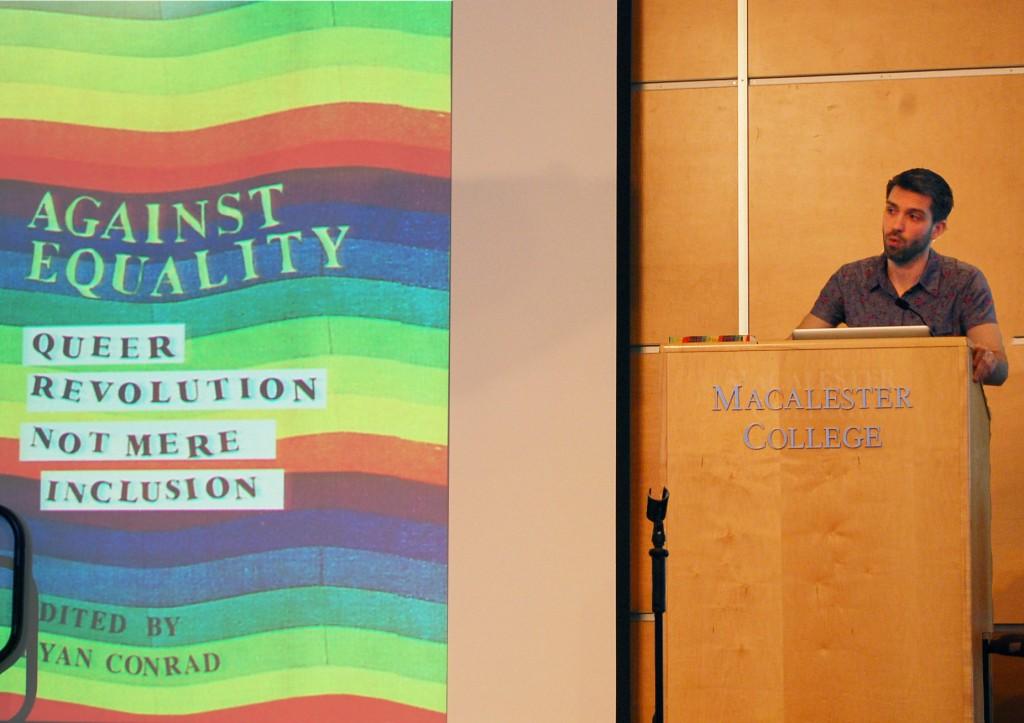 Ryan Conrad, co-founder of Against Equality, spoke to a crowd in Kagin Wednesday afternoon. Queer Union brought the speaker, who addressed the need to change the discourse around the gay rights movement in order to accommodate voices often left out of the movement. Photo by Bridget Gustafson ’17.

Against Equality (AE) is a misleading name for an LGBT group that claims to be further left than any democratic body in our government—and that’s exactly what its founders intend.

“We want productive confusion,” said Ryan Conrad, AE’s co-founder, in his keynote address on Wednesday in the Kagin Hill Ballroom. Speaking to a crowd of around 60, Conrad explained AE’s mission: “Queer revolution, not mere inclusion.”

In the midst of campaigns for marriage equality and inclusion of openly gay military members, AE representatives “sensed a need for a record of resistance against mainstream politics,” Conrad said. The organization was born from a dissatisfaction with popular “gay rights” imagery and discourses, as an attempt to accommodate voices they felt were marginalized from a movement that supposedly revolved around inclusion. One of the cornerstones of AE’s movement is challenging the pro-gay marriage movement which, its members say, is mostly represented by wealthy white gay men, rather than people of color or trans* folk. In response, activists began to collect academic sources that challenged the mainstream gay rights movement.

“Last year, when the marriage amendment was becoming big in this area, we thought it would be good to have another perspective,” said Chris DiCesare ’15, co-chair of Queer Union. “I think that what a lot of Minnesota saw during the marriage amendment was this one very white, gay-focused perspective that excluded a lot of people.” He hoped that AE’s presentation would help “people see that there’s not only one uni-linear gay experience or gay identity.”

After the initial presentation, students were invited to ask questions and share comments.

According to Conrad, placing organizing power in larger organizations like HRC and the National Gay and Lesbian Task Force too closely resembled the “trickle down” economic theory. The organizations, he said, concentrated the benefits in the power of the wealthy and influential, claiming that benefits would eventually reach everyone, while the rest of the community waited for their due. A prime example of this, according to Conrad, was the “landmark status” of Windsor vs. United States: Edith Windsor, who wed her partner of 40 years in Canada in 2007, and became a widow upon her wife’s death in 2009, sued the federal government for the right to a federal estate tax exemption granted to widowed spouses. He attributed Windsor’s popularity among the gay marriage movement not to an inspiring story, but to her image as a grieving widow as a “palatable” way to gain sympathy for the cause.

Conrad then pointed to incidents like Cece McDonald’s imprisonment—McDonald, a trans woman, was sentenced to 41 months in jail after a violent altercation with transphobic and racist aggressors—to prove how top-down approaches to “gay rights” were not addressing systemic issues.

Conrad urged audience members to instead advocate a “trickle up” theory to supportive friends and families. “Placing the most marginalized in the center,” he said, was a much more effective way of extending benefits to everyone, rather than hoping it would reach the outer edges of acceptable society.

Another student wondered whether members of the larger gay community might see the movement as divisive rather than productive. Hana Sarfan ’17 asked whether AE ever faced accusations of “creating divisions among the small group of queer people that have finally become visible.”

But visibility, Conrad pointed out, isn’t inherently positive. “Being visible isn’t a good thing if there is only one form of visibility,” he said, citing “Will & Grace” as a perfect example of when Americans had a very specific and singular understanding of gay identity. He returned to his criticism of more mainstream “gay rights” movements like the HRC, arguing that in their attempt to draw outsiders into the “normal” that they themselves were divisive.

Raynise Cange ’14 felt that Conrad’s own white male identity was essential to his effectiveness as a speaker at Macalester. “He’s saying something that has been said by so many people of color, so many trans* people,” Cange said, arguing that Conrad could relate more directly to Macalester’s mostly white gay community. “You can deconstruct that, but at the end of the day I think what he’s doing is right.”