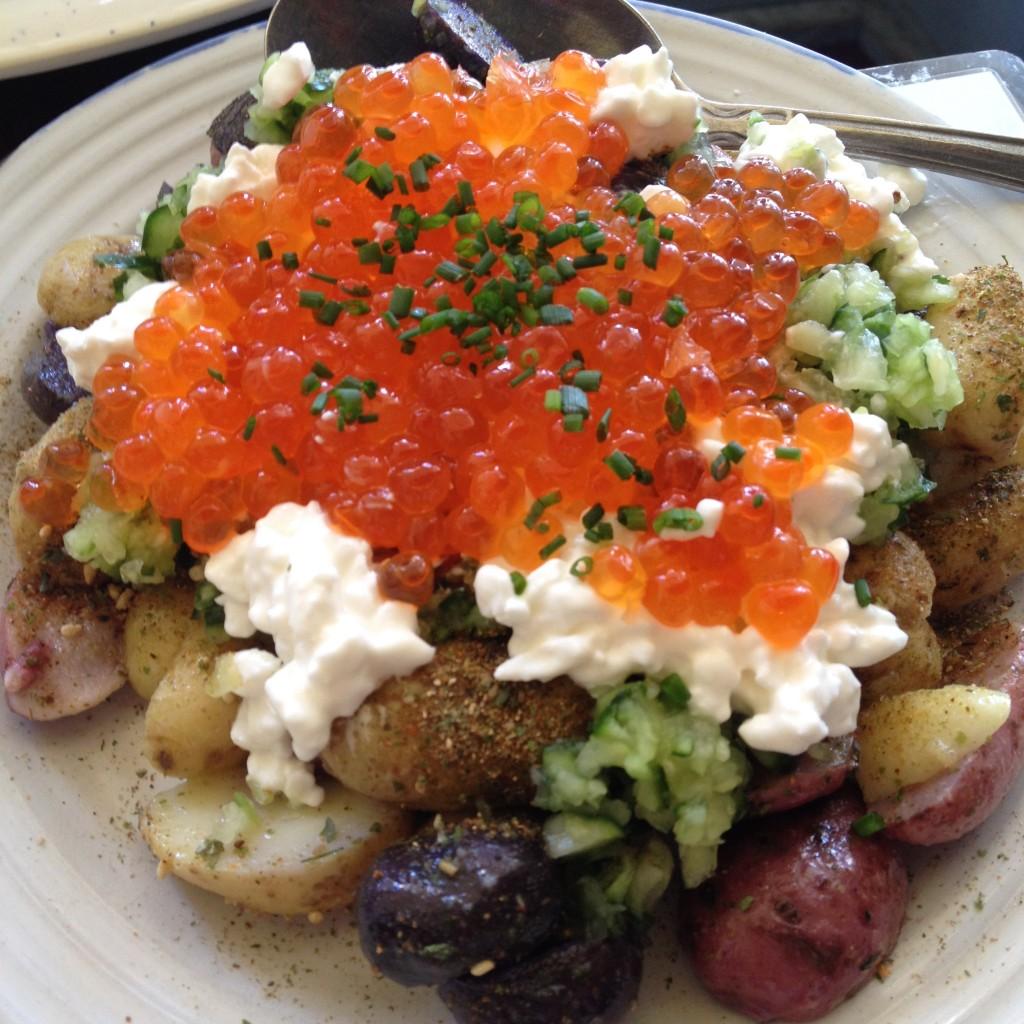 Dishes from Mission Chinese Food in San Francisco. Salmon roe on a bed of fried potatoes. Photo by Kaila Chan ’14

“LUNG SHAN RESTAURANT FOOD TO GO FREE DELIVERY” the yellow awning above the forbidding barred windows said. There was a youngish blonde man standing outside in a t-shirt and dark jeans, nonchalantly smoking a cigarette. This run-down Chinese takeout was apparently the place I was looking for: Mission Chinese Food, a vague name that’s fitting for a vague restaurant in the Mission neighborhood of San Francisco.

I walk inside and the smoking boy follows me in and seats me, so I guess he’s my waiter. The entire restaurant feels old, with its cave-like dimness and kitschy Chinese paintings of ships and landscapes. A paper dragon that seems to be left over from a Lunar New Year celebration a few years ago hangs from the ceiling. The cups are plastic and the plates are chipped. I look at the menu and order, wondering if the photo of smiling Asian people are employees, because I really hope so. “Americanized Oriental Foods,” they advertise.

My Icelandic beer arrives while I’m taking in the sort of crappy but nostalgic decor. I’m excited about the food because it has been praised as an inventive take on traditional Chinese dishes, and when traditional Chinese food is all about consistency, it’s fun to try innovations. I’m not a food purist because in the United States, cultures are bound to share things with each other. People have to adjust recipes for the ingredients at hand and need to cater to varying tastes. I’m from a Chinese family and we’ll often eat bloody steaks with rice, collard greens on the side. My question is if I’m being exploitive, if I’m demanding a more assimilated version of food that’s been stripped of its culture and put in a package that’s more palatable to the western diner. Asian “fusion food” can be tremendously fun, like kimchi tacos or sushiritos (sushi burritos), but I feel like it can become a insulting when a little bit of sesame oil and ginger means that bamboo plants and decorative fans now need to clutter the restaurant. There needs to be intention in the recipes, with alterations that show creativity and cultural exchange. Cream cheese wontons are just a lazy excuse to fry more fat and the concept of Chinese chicken salad boggles me because in Chinese food, food is rarely left raw.

Then I go back to thinking about the decor of Mission Chinese Food. In a way, the restaurant isn’t giving you the trendy, minimalist box that you imagine a hip new restaurant to be in. This restaurant forces you to think of the food’s more humble origins. But then I also wonder if the repurposing of an old Chinese restaurant is an attempt at a disguise to ward off accusations of gentrifying the Latino neighborhood, already filled with expensive coffee shops and boutiques. Or maybe it’s supposed to be one big joke, that such original food is served at such a cheap looking restaurant.

I ordered tea-smoked eel and braised pork wrapped in rice noodles with hoisin sauce and a magnificent ocean jewel of salmon roe heaped on a bed of fried potatoes in olive oil with minced cucumber and cottage cheese. I devoured those Nemo eggs. The fish egg dish’s only “Asian” quality was probably that there were fish eggs all over it, but at least it wasn’t slathered in a chili-ginger [insert sauce you can find in the Asian aisle]. The menu seemed to reflect that the chef had great love for traditional Asian dishes and was making food with those traditional elements as an homage. And even though I felt pretentious with the Icelandic beer, I also felt like why not? Chinese food is more than deserving of fancy beer too.

Minneapolis’s Chino Latino, on the other hand, is in my opinion the worst offender to Asian and Latin American food and culture. Not only does Chino make consistently racist advertisements (In 2012, they ran an ad with women in traditional Indian dress next to a sign that said “Untouchables welcome,” “No longer serving slumdog,” and “I.T. Department Now Hiring!”), but racism and ignorance seem to permeate every aspect of their restaurant. I first went to Chino Latino thinking that it was actually a Chino Latino restaurant that served food influenced by the Chinese diaspora in Latin America. Or even just food that was an interesting mix of the two cultures. Instead, Asian and Latin American cultures are used as an excuse to exotify french fries and chicken wings, get drunk off tropical drinks, plaster the walls and tables with Orientalist caricatures, and dress the staff in shirts that say “Wanna Bangkok?” There is no melding of Asian and Latin American cuisine, and those cultures are only depicted as ridiculous stereotypes or jokes. There is even a “Chino Bomber” where you are given a headband, glass of sake, and you’re supposed to yell “Banzai!” (Maybe they should read a history book and see why that’s a horrible idea for a sake bomb name, and maybe people shouldn’t pretend to be Japanese when they drink sake). Here, “fusion food” is pure cultural appropriation that profits from their robbing of particular cultural elements and completely bastardizing them.

Treating food with respect is necessary because food is an extension of culture, family and pride and you can’t just go in someone’s house and act like a racist fool when they serve you their food, in whatever mix of traditions it comes in. Or you can’t just serve a particular dish and act like a stereotypical parody of a culture. Restaurants like Chino Latino are like someone deciding to have a dinner party with some fried rice and tacos and then giving everyone sombreros and kimonos and speaking in fake Chinese. Stop this horror.
Please.