Battle of the Bands // A celebration of music at Macalester 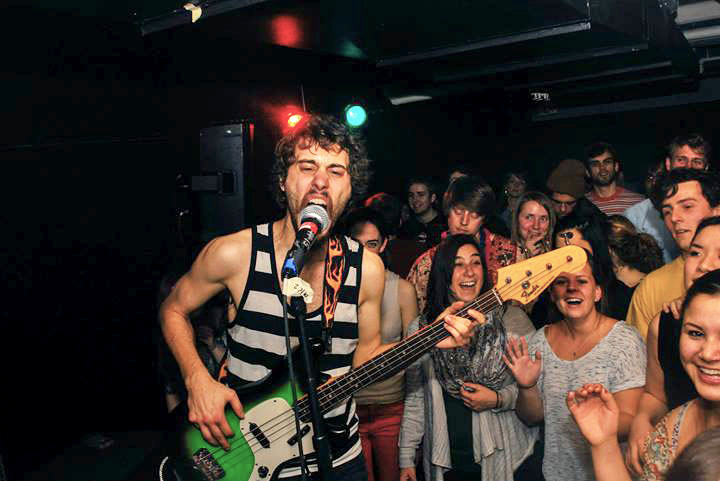 Daniel Voss ’14 of Broken Gnome performs in front of a roaring crowd;

Battle of the Bands has long been an affair allowing performers to parade their skills and hopefully melt some faces in the process. More competitive than a regular showcase concert, with less choking pressure than a rap battle, the culture of the Battle of the Bands has found its way into movies, TV shows, and communities everywhere. Macalester’s own student-organized Battle of the Bands ups the ante by rewarding the winner with more than just pride. With a chance to open for Springfest stars Danny Brown, Kelela and recently announced Cashmere Cat, there was a lot on the line for Battle of the Bands participants this year, and they didn’t disappoint.

Replicas, Solate, ddean cassidy, The Heretics and Broken Gnome all had the opportunity to grace 10K with their presence. Each group had its own unique sound, with instruments ranging from saxophones to trumpets to melodic background singers. The performers fed off of the energetic crowd, dancing and clearly having a great time — giving the event a feel that resembled more a small music venue than a basement in a college dorm. Guitarist of The Heretics, Hank Hietala ’17, threw a crisp production at the audience and gave a lot of credit to the listeners: “The crowd’s energy was infectious, we definitely poured more energy into our songs because of their enthusiasm.”

Although Battle of the Bands is a very sociable, lighthearted experience, there can only be one winner. This year, Solate stole the show. Its members fed incredibly well off one another. With seamless transitions, haunting solos and all the stage presence of professionals, it’s no surprise they were the clear victor Friday night. Solate’s standout was its lead singer, Maya Vilaplana ’14. Clearly a dedicated musician, Vilaplana has a gentle, ballad-inducing voice. “She sings like an angel,” said Harrison Beck ’16. Indeed, her angelic tones filled 10K’s listening arteries leaving listeners wanting more, and they’ll get their wish come Springfest.

The atmosphere that swells 10K once a year during Battle of the Bands is unique to the event. Although it is a competition, the event certainly is more about showing off our school’s talented musicians than it is about picking a winner. Students left feeling musically excited, and the bands left it all on the stage: an all-around success. If the only complaint is the music was too loud, you’re doing it right.