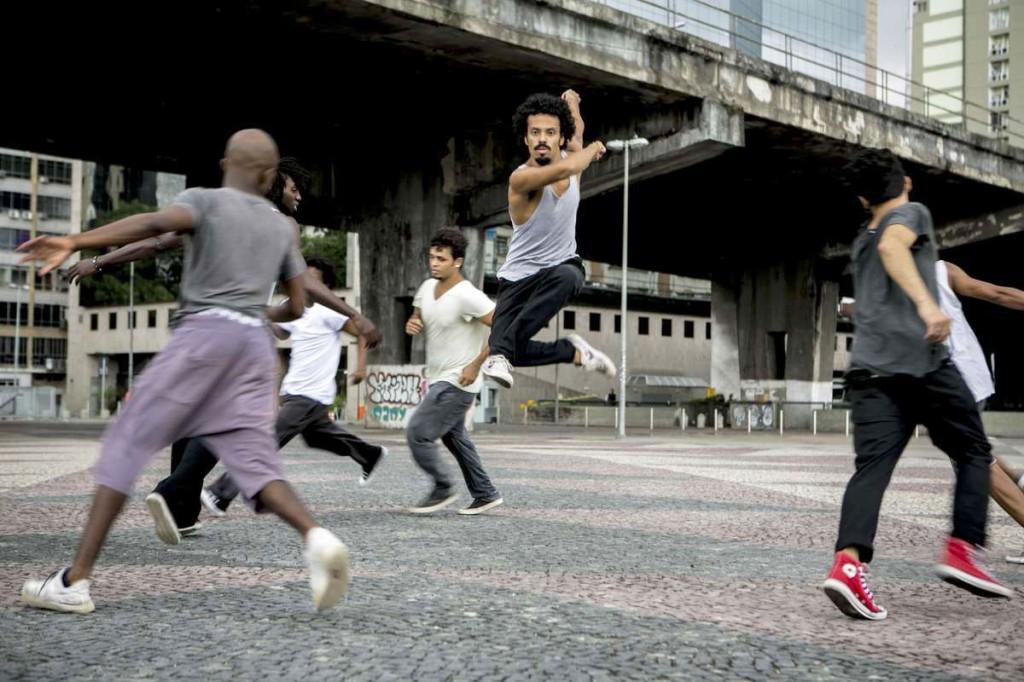 Members of the Companhia. Photo Courtesy of The Walker Art Center.

At a potluck dinner in downtown Minneapolis last week, one of the company members of the Rio de Janeiro-based Companhia Urbana de Dança tried to teach me how to house dance.

Johnny is a tall, curly-haired dancer, wearing a chic button-down and dark pants. Like the seven other members of the company, he is athletic and nuanced in his work. When he looks at the audience from the stage, he connects with them in an utterly unique way that I won’t try to describe here. Each of the company members have that quality, that feeling that you could watch each of them individually for an hour and let yourself be mesmerized by the story that lives and pulses in their dancing.

I was having trouble even as I stared at his feet and he did the step in slow-motion. “You got it!” he tried to reassure me, but we both knew I didn’t.

I would see the subtle incorporations of these movements, and many other flavors from the richly textured backgrounds of all eight members of the company, in the Companhia Urbana de Dança’s performance at the Walker last Friday. Here, nothing was lost in translation — save the moments in the second piece when the dancers chatted and teased each other in Portuguese.

Choreographed by co-founder and artistic director Sonia Destri Lie and the dancers themselves, the company showed two works. First, ID: Entidades, a work exploring “the everlasting possibility of dialogue between hip-hop, urban traffic, and contemporary dance.” Muted, dramatic lighting and all-black costumes, plus the incorporation of more modern-based movement (like runs, hinges and contractions), made this piece feel more designed for the American modern concert dance stage. Moments of silence, of an individual dancer rippling his body onstage (the especially strong André Feijão) or two dancers breakdancing in perfect unison (co-founder Tiago Sousa and Julio Rocha) were contrasted by the moments when the company danced together. Despite the overall formality of the piece, though, the dancers didn’t sacrifice individuality: each of them wore a different pair of gently-worn sneakers, presumably their own shoes.

The second piece, the lighthearted, vibrant Na Pista, felt like a dance party in the favelas of Rio de Janeiro, complete with a disco ball, a playfully competitive game of Musical Chairs, and seventies disco-style costumes. The dancers celebrated each other, and their own unique strengths by each taking a moment or two to groove alone.

The individual dance histories of each of the performers, and the street-based movement that many of these dancers grew up with/didn’t take any classes to learn, became much more apparent in Na Pista. Even in ID: Entidades, though, one could feel the influences of hip-hop movement like waving, tutting, popping, locking and break dancing. It was somewhat surprising when, in a talk-back post-show, Destri Lie asserted that the company didn’t use this kind of vocabulary in the studio.

“You don’t mess with my samba, I don’t mess with your hip-hop,” she said with a smile. And true: there are several elements of this unique group of dancers that Destri Lie shouldn’t mess with. Destri Lie, as a white woman with a higher education, mindfully approaches her position as boss, choreographer and teacher of a company composed of mostly men of African descent, from the “slums” or favelas of Rio. In an interview with TimeOut NY, she explained, “I knew that to have a dance company with black dancers that came from the favelas and so on, I should be careful. Not with them, but with others: the media, the press release and so on.”

She doesn’t go easy on her company in any sense. But she also does not have “‘favela’ in bold letters” in the program, as she explained in the same interview. A strict disciplinarian, with a no-nonsense approach to dance and art, Destri Lie has no qualms calling out her dancers in front of their colleagues when they make a mistake, or introducing them to occasionally foreign concepts like rehearsal schedules. “I work like a Bolshoi,” she said.

The audience on Friday responded with a standing ovation to the company, and effusive words of praise in the talk-back. Most concert dance in America does not attempt to weave itself with the world of street dance, as the Companhia does so beautifully. The striking musicality, ease and necessity with which the dancers moved is not always seen in more experimental modern dance pieces.

“We feel a lot of respect over here,” Destri Lie conceded. “I don’t know what Brazil is waiting for — I think they are missing a lot of things.” Despite their home country’s hesitance to celebrate them, Companhia Urbana de Dança has received international acclaim.

No coincidence, then, that all of the dancers are extraordinarily passionate, hard-working, generous artists, like Johnny trying to teach me some steps at dinner. In reference to working with the company, dancer Raphael Russier said, “being here is like to live…[to] wake up every day and have something to do, have a commitment.