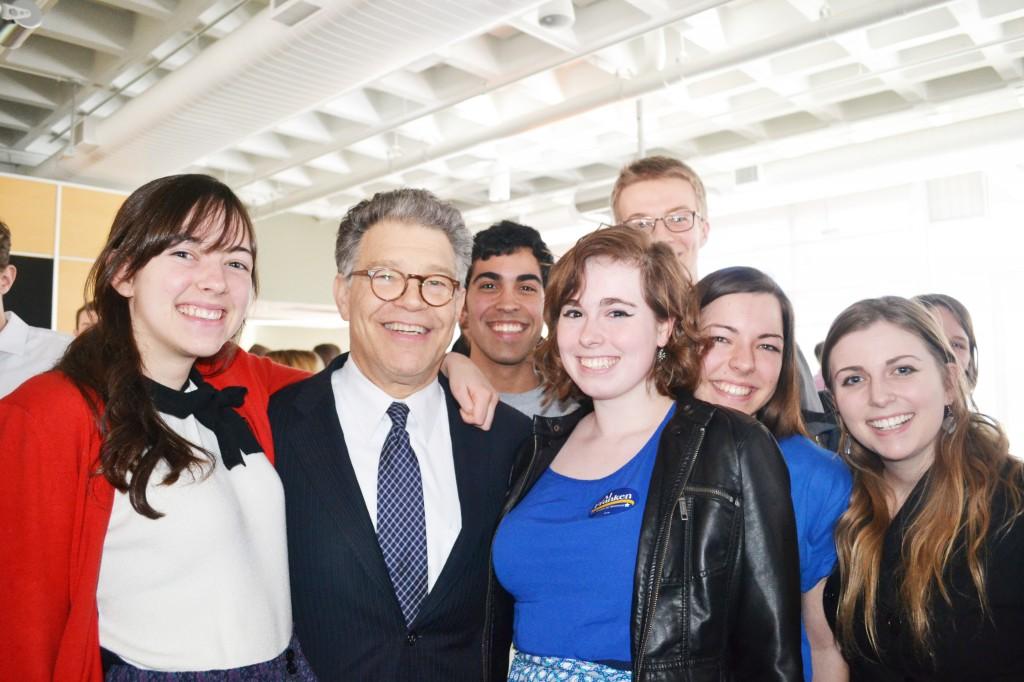 A line of students, staff and community members spilled out of Kagin and down the Grand Avenue sidewalk last Saturday to hear Minnesota Senator Al Franken and Massachusetts Senator Elizabeth Warren speak.

“I was thrilled to enter Kagin and to see an absolutely packed room,” said Mac Dems co-chair Joe Klein ’16.

“There was a lot of planning that went into the event, but there were also a lot of really capable, passionate people who helped make it happen,” said Mac Dems co-chair Margaret Mulligan ’16.

The event, which opened at 1:00 pm and quickly filled the Hill Ballroom to capacity, was put on by Mac Dems and the DFL and featured multiple speakers aiming to raise awareness of Franken’s campaign for re-election this November and the role that Macalester students can play in the campaign.

Starting with Minnesota House Majority Leader Erin Murphy, who represents Macalester’s district, the speakers stressed not only the importance of a single vote, but also what Franken has done during his time in the senate to support college students and the middle class.

“He has been an effective voice for students,” said Asma Nizami ’14, who spoke during the introduction of the event. “Al has had our back and now we need to have his back.”

“No one should put limits on our ability to strive. We can reach beyond the sky,” Champion said. “Who better to do that than Senator Al Franken?”

Franken won his first election in 2008 by a narrow margin of 312 votes after a lengthy recount process in which then-Senator Norm Coleman appealed Franken’s victory.

Since then, Franken has become a “tireless champion,” as described by St. Paul Mayor Chris Coleman, in fighting for lower college tuition, lower healthcare costs, and advocating against poverty, the equity gap, and sexual assault and harassment in the workplace.

“312 votes last time — I think we can double that,” Coleman said to laughter as he introduced Franken. “[Al] serves because he cares about this state.”

Franken and Warren entered the stage at the same time and were met with a standing ovation from the crowd. Franken started off almost immediately with a quick hint to his past as a satirist.

“It’s 2014, Democrats are doomed, and it’s all your fault,” he said drily as the crowd laughed.

Franken also pointed to his narrow margin of victory in 2008 and how that had only been accomplished through hard work and young voter turnout. According to Franken, Democrats suffered a loss of power in 2010 because young voters didn’t show up to the polls.

“Making sure it doesn’t happen again in 2014 is your responsibility,” he said. “This election isn’t about me. It never is. It’s about you.”

Franken spoke at length about the necessity of supporting college students and keeping college affordable, stating that both he and Warren were working together to lower the amount of debt that college students graduate with and “to make sure big banks don’t rip you off.”

“Macalester has always been on top of the issues that matter to young people,” Franken said, wrapping up. “I’m not asking you to be a part of this campaign, I’m asking you to take ownership … I’m counting on you from now until November.”

‘Going to fight back’

Warren focused her part of the event again on the importance of re-electing Franken and working towards a more progressive future.

“It has been an honor to be in the U.S. Senate with Al,” Warren said.

Warren cited the period from 1930 to 1980 in the United States as a period of great social and political change, saying that government helped bring about these positive changes by investing in education, infrastructure and research. She also conveyed her disappointment that these values seem to have fallen off the table in more recent years.

Warren was critical of what she saw as the Republican view of ‘I got mine, the rest of you are on your own.’

Warren reiterated some of what Franken had already touched on, adding the importance of stopping oil subsidies to big companies and putting that money instead towards education. She also mentioned the importance of allowing “workers to come together and bargain collectively,” of moving more people above the poverty line, and other reforms that she wanted to see in the years to come.

“I can’t believe I have to say this in 2014 — we believe in equal pay for equal work,” Warren said to loud applause. “Equal means equal, that’s in marriage, in the workplace and in every place else in this country.”

“I want Al Franken beside me in this fight, all the way,” she said. “And I’m asking you, get in the fight for Al Franken.”

Mac GOP released a criticism of Franken’s presence on Macalester after the event on Saturday that “highlighted the senator’s contradictory stances on issues ranging from internet freedom to health care reform.”

“Senator Franken talks a good game about helping average Minnesotans, but young people in Minnesota are tired of his talking points,” said Andrew Ojeda, a Macalester alum and 2012 candidate for the school’s state House district.

“Franken supported Obamacare, which has proven to be a raw deal for young Minnesotans,” added another Mac GOP member.

“I thought both of them were absolutely fantastic,” said Mac Dems co-chair Joe Klein ’16. “[Warren] really hit home that we need to be engaged and we need to be active as a school.”

Mulligan agreed. “Warren is … a phenomenal public speaker, and her presence helped to facilitate an environment that recharged and empowered us,” she said.

Editor’s Note: News Editor Joe Klein was not involved in the production of this story.