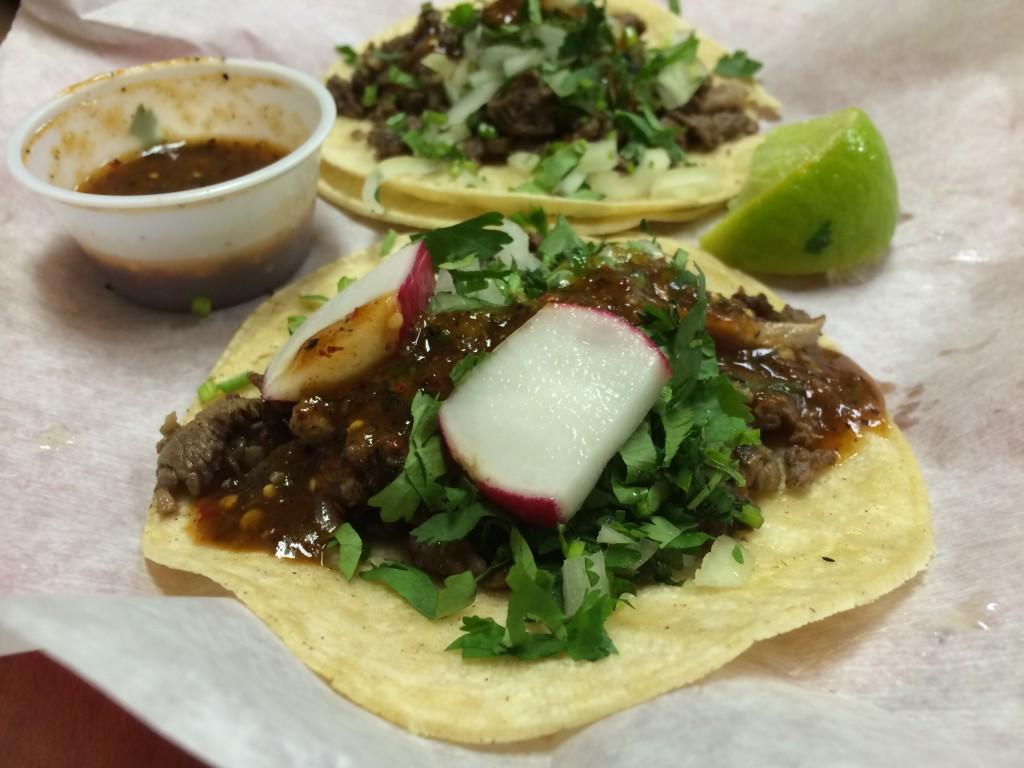 Two tacos from Taco Taxi, served with salsa and radishes.

There are two food items in this world I could eat every day: Milkshakes and tacos. When the weather gets to -40 I tend to shy away from the former, but I can’t think of many scenarios in which I would turn down a good taco. If you feel the same way, here’s a short list of taco recommendations in the Twin Cities. Warning: none of these are negative reviews because I really, really love tacos.

Nico’s Taco and Tequila Bar; 2516 Hennepin Ave South, Minneapolis: I first went to Nico’s during their soft opening in the fall because someone told me they finally found the holy grail: a taqueria and tequila bar under the same roof. I didn’t even know about the vats of guacamole or flights of salsa until I got there, but it all lived up to the hype. The chefs like to highlight that they use spices indigenous to Mexico, and it shows in the menu: guajillo chile, juniper berries and chile de arbol all make appearances in the long list of taco options. Nico’s more creative minds have also played around with grilled cactus, pineapple rubbed pork, and cinnamon braised beef. My housemate, and Food and Drank editor, tried their vegetarian Nopales (cactus) taco and loved it. Bonus: bacon tacos.

As far as drinks go, the reposado list goes on for days. I don’t feel terribly qualified to talk about that in detail, but I do know a good margarita menu when I see one. With four vastly different margaritas and four cocktails (some made without tequila, for those who just can’t quite down the stuff), Nico’s mixologists know how to use fresh fruit year-round. Love blood oranges? Go for La Granada, made with blood orange, pomegranate and Tres Agaves. Wish there was an alcoholic version of cucumber water? There is, and it’s called the Agave-Cucumber margarita. And though I have yet to try it, the Chill Thyme — raspberries, thyme, Tierra Blanca and St. Germain — sounds like everything good in this world. For those still not convinced, the wine list is quite lengthy and includes both a Torrontes and a Malbec.

Rusty Taco; two locations: I’m not sure if Rusty is a specific person, but I promise these gourmet-style tacos have no old, wet metal hidden below the surface. Rusty, whoever he may be, is all about matching meats with the right toppings. What I consistently find most appealing about this restaurant is the way its cooks explore outside of what one might call the “traditional” style taco — you won’t see carnitas here, but the BBQ pork taco is a quality alternative. Similarly, fried chicken here takes the place of classic ranchero chicken. Rusty’s tacos are accompanied by a three-tiered hot sauce system that is pretty Minnesotan in its strength of spiciness, but if you really feel like burning your face off I suggest you become one of those people who carries hot sauce in your pocket.

Recommendations: Brisket taco, fried chicken taco. For vegetarians, the black bean taco is a solid option — it really is more than just beans and cheese!

I’ve only ever been to the location in St Paul (508 Lexington Parkway South) because it’s conveniently next to Trader Joe’s (RIP FreeStyle Yogurt), but they also have locations in Minneapolis (522 East Hennepin Avenue) and Maple Grove (6346 Vinewood Lane North).

Taco Taxi; 1511 East Lake Street, Minneapolis: A favorite amongst my housemates, and an establishment many have never been to prior to 2 a.m., Taco Taxi is the best late-night taco joint around. Though there are plenty of options — from burritos and quesadillas to sopes and birria — I consider it wise to stick with the place’s namesake. Most notably, Taco Taxi provides a diverse menu with all of the traditional taco meats you could ever want, and then some: you can get your asada fill for just a few dollars (tacos are $1.75/piece), but if you’re feeling adventurous you can also go for cow tongue or tripe.

The best part about this one is its management: Taco Taxi was started by two brothers from Jalisco, and they’ve managed in the past 10 years to hire some of the most friendly guys around. This is huge for such a (very) late-night place.