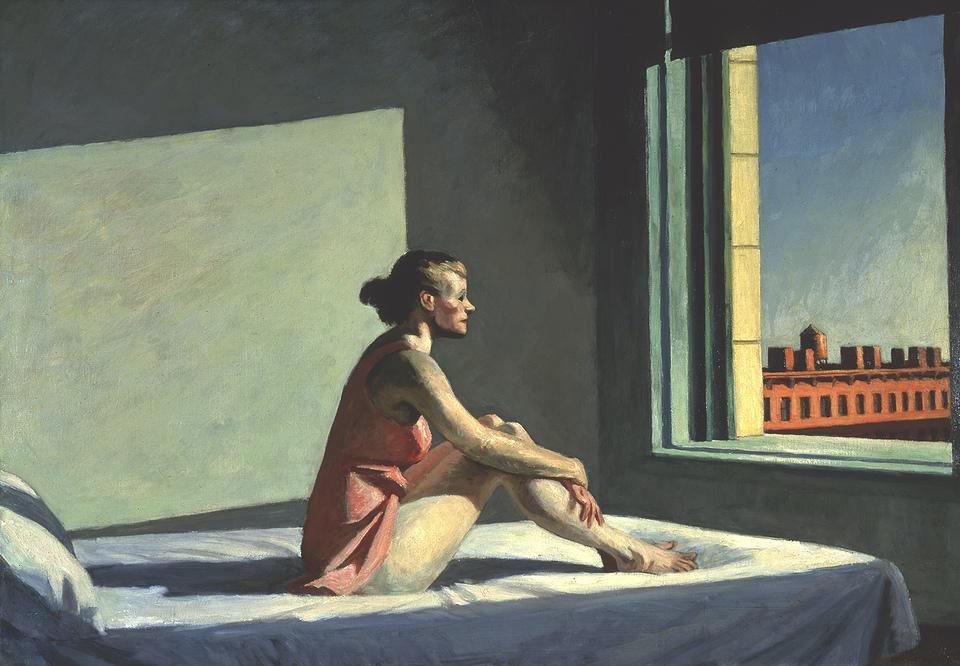 I distinctly remember the first time that I saw one of Edward Hopper’s paintings. It was during my junior year of high school and we were in the midst of an “Arts and English” unit. We had just read “Cat in the Rain” by Ernest Hemingway and the teacher was presenting the arts portion of the project: to paint a scene from the short story in the style of Edward Hopper. As I viewed Hopper’s examples I was struck with how simple his paintings looked. I left class thinking, “Okay, I’ve got this, all I have to do is paint a lonely protagonist looking slightly stick figureish and make the background a building.”

Indeed, over the years Hopper’s work has often been reduced to such. In less nuanced discussions of his work he is often described as an artist whose virtuoso is limited to articulating architecture and landscape, not as an artist who has any skill in depicting the human form — in fact that was about all I had taken away from this high school unit.

The Walker’s exhibit “Hopper Drawing: A Painter’s Process” dispels all notions one might have of Hopper as a merely humble, pastoral painter. The exhibit, as indicated in its title, features Hopper’s drawings, sketches and drafted preparations for some of his most famous paintings. The exhibit also houses many of his finished paintings including but not limited to Office at Night, Summertime and Morning Sun.

What was most startling about Hopper’s sketches was the immense skill with which they were rendered. As mentioned earlier, I had gathered that Hopper’s human figures looked stiff because he wasn’t able to make them look smooth. But seeing his illustrations changed this; it made it apparent that the way he paints his figures, and everything else, is incredibly intentional. He clearly had the ability to paint whatever he wanted however he wanted. This intentionality shows just how adept he was at translating human tension into literal, visual, painted tension.

Hopper’s technique aside, the breadth of the exhibit was also impressive. The exhibit is divided into sections: Hopper’s Drawings, Hopper in Paris, Views of New York, the Interior, the Road and the Bedroom. The sections as a whole paint a picture of a man obsessed with the human form; both its physical and its physiological manifestations. The works also show a methodical and thorough way of working. To the right is an example of the painter’s process. First there is a sketch of the figure, followed by a more detailed sketch with specific notes about what color each small segment shall be, and lastly there is the final painting. And Morning Sun is not the only painting with this amount of detailed planning; each painting is flocked by its own guard of preparatory works.

This exhibit is definitely worth seeing, if only because it will give those who have always thought of Hopper as a “maybe shouldn’t be among the American Greats”—i.e. me—an unfathomable appreciation for the artist’s technical talent, as well as his intentional and methodical way of composing his works in order to convey deep truths about human psychology.