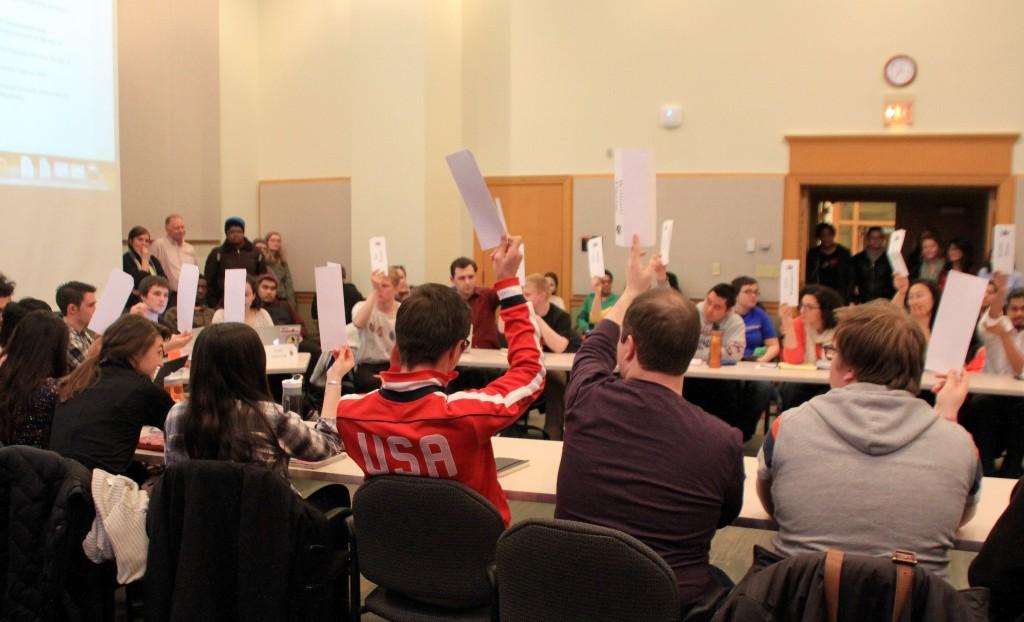 25 placards went into the air Tuesday night as MCSG unanimously passed a resolution calling on the school to commit to hiring more faculty members of color. Over 100 supporters packed the Weyerhaeuser Boardroom Tuesday night to express support for the bill. Photo courtesy of Emma Pulido ’16.

On Tuesday night, Weyerhauser boardroom filled with students and staff coming to show support for the resolution “A Call to Increase the Diversity of Faculty,” which was proposed by Merita Bushi ’14 and Alvin Kim ’14.

Students filled chairs in the back of the room and sat on the floor and behind the representatives’ tables.

“Thank you everyone for coming out,” said MCSG President Kai Wilson ’14. “This is amazing support that we see here.”

Bushi and Kim introduced the resolution briefly, expanding on the information that they had sent out in a student body-inclusive email.

The resolution aims to “designate 7-10 tenure-track positions explicitly and exclusively for new faculty of color hires over the next 3-5 years.”

It was created in part because of “our experiences, and people coming and talking with us during office hours and telling some disheartening stories,” Bushi said.

Passing the resolution would allow MCSG to urge the Strategic Planning Committee to hire faculty members of color, specifically targeting tenure positions, which will be more stable, according to Bushi.

“This bill is an effort to make a dent in that,” Bushi said.

The resolution also cited Macalester’s commitment to multiculturalism and the importance of making students of color feel safe and equally represented on campus.

“What [this is really] about is the dynamics in the classroom, [and] making the experience at Macalester as welcoming as we can,” Bushi said. “This is very feasible and very easy for Macalester to pick up and do.”

“Faculty and staff of color actually have a strong bond on this campus…we will be there for each other,” Chris MacDonald-Dennis, Dean of the Department of Multicultural Life said.

“It’s the first time I’ve heard him say that,” she said. “This is not just coming from the students, but directly from the top.”

When put to a vote, the resolution passed without any opposition and was followed by loud applause from MCSG and the students gathered in the board room.

“Guys, that was amazing,” Wilson said. “I’ve been doing this for a long time, and that was incredible. Thank you so much for coming.”

“In my time at Macalester, this has been the largest participation since the Program Board bill last year,” said FAC at-large member Adan Martinez ’16. “And as a person of color, it’s so great to have so much support from the broader community.”

After voting on the resolution, supporters left and MCSG continued with standard meeting procedures. Three new student organizations were introduced for chartering: Neuroscience Club, the American Civil Liberties Union (ACLU) and Entrepreneurship Club. The vote for their charter approvals will take place after break.

Little Scots was approved as a new organization to a round of applause from the legislative body. Sam Doten ’16, along with other members, expressed excitement at adding an org to campus “that does really positive things and help[s] form connections with the wider community.”

The FAC also approved the Middle Eastern North African Association (MENAA) request for $700 for Nowruz, a celebration of the Persian New Year. They also approved $1,435 out of a $1,500 MULCH request to sponsor a Town Hall discussion on the campus Real Food commitment.

The SOC Organization Management Bill also passed, renewing the MCSG contract with OrgSync, and Wilson and Bushi gave updates about the recent Board of Trustees meeting.

More time was dedicated this week to committee bylaws, which had been tabled after a lengthy and tense conversation at the last meeting. When time constraints and a busy schedule caused tensions to rise again, Theriac proposed to table the discussion again and continue it after spring break. After several back and forths, the motion finally passed.

Joe Klein ‘16 presented the Lectures Coordination Board bylaw revisions for the SSRC, which focused on reinstating a smaller version of the Board and aims to bring in well-known speakers.

“This outlines how [the Lectures Coordination Board] should be selected, how they should meet,” Klein said. “They’ll be required to meet once before we leave for summer…[and] hit the ground running in the fall.”

If passed, the bill will go into effect immediately to allow the board to work on bringing speakers as early as next year, Klein said.

Editor’s note: The News Editor, Joe Klein, was not involved in the production of this story.