His Holiness the 14th Dalai Lama visits Macalester, speaks to over 3,500 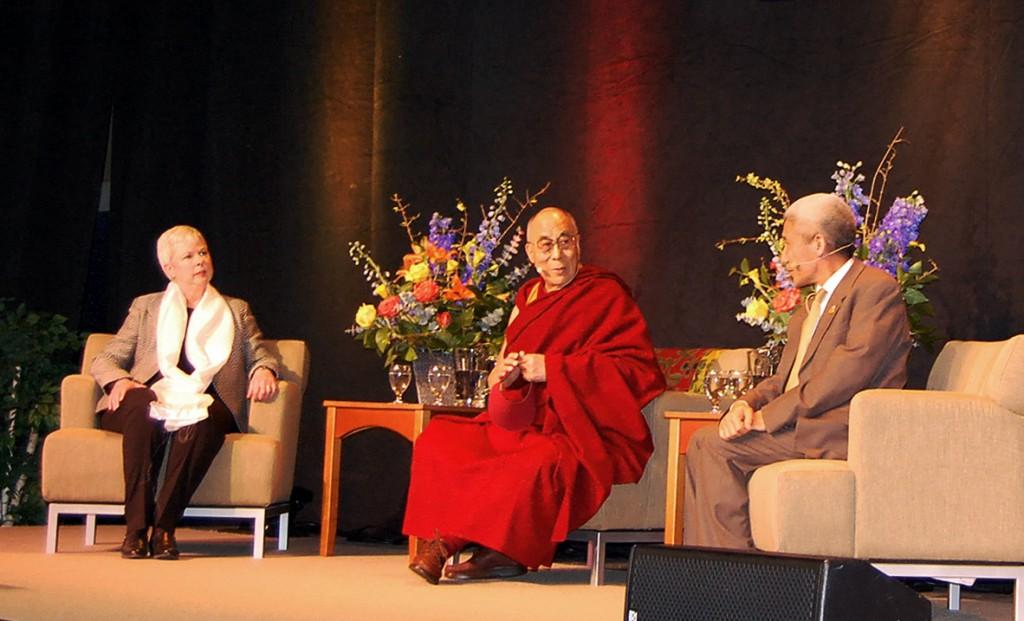 Provost Kathy Murray, His Holiness the Dalai Lama and His Holiness’ aide sit on stage while President Brian Rosenberg introduces His Holiness. President Rosenberg and Provost Murray presented His Holiness with the honorary degree of a Doctor of Humane Letters before he spoke. Photo by Naomi Guttman ’16.

After five years of planning, a crowd of 3,500 welcomed His Holiness the 14th Dalai Lama to campus last weekend with a handful of standing ovations. His Holiness addressed matters as diverse as the value of education in the 21st century, the intersection of science and faith, and the merits of ping pong. Visits from figures held in such high esteem don’t come to Macalester every semester, and college leaders tied His Holiness’ message to the core values set in the school’s mission.

“The alignment between his work, his values, his spirit, and what we try to accomplish at this college is deep,” President Brian Rosenberg said. “It means an extraordinary amount to have him here with us.”

His Holiness spoke to many issues pertaining to Macalester and ACTC students, who he said represent immediate future of a world he sees as wrought with challenges, such as climate change, rising income inequality, and violent conflict. His Holiness said that the advent of the 21st century and the ascent of younger generations to power and influence gives the world a new opportunity to reject its past history of violence and conflict, and move to a more peaceful period centered around dialogue and understanding.

“We are a generation of the 20th century,” he said. “Our generation has created a lot of problems on this planet. Now let the 21st century solve these problems.”

Much of His Holiness’ talk was directed toward young people, who made up the majority of his audience on Sunday. He joked that young people have more time to make changes than the elderly in society, and that it is their responsibility to ensure the creation of a more peaceful, more just world.

“You [the young people] are the basis of our hope. Our generation created lots of problems on this planet, and it’s your job to be creating a better society, a better world,” His Holiness said. He jokingly added that “when I meet old people, it’s almost like ‘you go first, or I go first.’”

His Holiness’ speech was entitled “The Nature of Happiness, Fulfillment, and Embodiment,” concepts which he interwove throughout his talk. He spoke about the necessity of relaxation and inner strength, and how focusing and calming one’s thoughts is just as important as resting one’s body.

“Just to lay down on a comfortable bed is not relaxing,” His Holiness said.

The talk was followed by a question-and-answer session between His Holiness and President Rosenberg. One of the questions Rosenberg asked was about the value of education. His Holiness recognized the value of education, saying it helped close the gap between “appearance and reality,” but also spoke of the challenges that it can create. He said it can lead to “too much anxiety and ambition,” and in modern times tends to focus more on material value than inner value.

“There is a need for education on warm-heartedness,” His Holiness said.

For many, His Holiness’ prominent sense of humor was a highlight of the event.

“I was always thinking he was that meditative type of person who’s always quiet, and once he speaks he speaks with authority,” Harrisonford Fauni ’16 said. “It was amazing to see he can be a goofball sometimes, he can make jokes, instead of just seeing him as a religious leader. He’s a real person to me.”

This mix of light-heartedness made his message about the problems facing the world today easier to process for some students.

“Although he had a message that we still have a lot of work to do, and he put a lot of emphasis on the importance of our generation and how much work we have, I never felt that he had a negative vibe, and he always phrased it in the most positive way possible,” said St. Catherine’s student Michelle Mulowney ’17.

Simply his presence and stature made an impact, said those at the event.

“Knowing that this is a once-in-a-lifetime opportunity, the enormity of who he is and what he means is so cool,” said Allison Greenlee, Assistant Director of Campus Programs and one of the handful of ushers at the event.

Students in this semester’s neuroscience studies senior seminar, taught by Eric Wiertelak, had the opportunity to meet with His Holiness prior to the event. The group met with the Dalai Lama for 20 minutes immediately prior to his talk and discussed a range of topics from science and faith to Jonathan McJunkin’s ’14 dislocated kneecap.

“It was really incredible to be in the presence of someone who just radiated goodness,” Keelia Silvas ’14 said. “For him … it was an intense feeling of ‘everything’s okay.’”

Some students also criticized His Holiness’ talk, with most of the critiques focusing more on the reception of the day than the talk itself. Alana Horton ’14 posted a critical Facebook status following the event that was liked more than 90 times, expressing mixed feelings about the event and its reception. She questioned the relevance of Rosenberg’s final question about sports, as well as the way the visit was framed and received.

“I got the feeling that the afternoon had a lot more to do with celebrity worship, and the chance to say, ‘I was there,’ which people did throughout via Facebook posts and Snapchat, than it had to do with a desire to engage in something political or spiritual,” Horton wrote.

Similar concerns were expressed before His Holiness spoke to the community.

“I think there’s been a lot built up around it,” Jeanne Stuart ’14 said before the talk. “ I’m curious to see what Macalester’s perception is like after the actual event. We were talking earlier about how most of this is the glitz and glam about having the Dalai Lama come, without necessarily speaking about what he’s going to say.”

Years of planning finally pay off

Two students from St. Catherine’s arrived as early as 9:30 a.m. on Sunday to wait in a line that, at that point, didn’t exist. It was -10° out, and Vice President of Student Affairs Laurie Hamre turned the students away for their own safety. One of the students, Annagloria Quintanar ’15, also saw His Holiness speak at Augsburg the day before. That time she camped out as early as 7:30 a.m.

“His presence is, you feel at peace almost,” Quintanar said. “My heart was jumping when I saw him.”

Crowds finally began to show up, despite the small temperature increase to -5°, around 11 a.m. John Stark ’16 was one such person. Equipped with long underwear and high socks, Stark was ready to brave the cold for a front-row seat.

“[I was] all prepared to wait outside for an hour and a half,” Stark said. “It’s cool to see how one man can bring us together to talk about happiness … neuroscience and happiness.”

Logistically, Hamre says the 3,500-attendee event went down without a hitch. From the final security sweep at 10 a.m., which included a bomb-sniffing dog and four guards from the State Department, to the hard work of the clean-up crew, Hamre said the event ran smoothly.

“This wasn’t like Obama or Biden [in terms of security],” she said. “But the whole thing was so well organized.”

No students or community members who had a ticket were turned away from the event. All those that procured a ticket were seated well before His Holiness’ talk began.

Most importantly for the administrators who have been planning this event for years, His Holiness seemed from the beginning to feel comfortable amongst the Macalester community.