Cooking with DeWitt: The everlasting syllabub 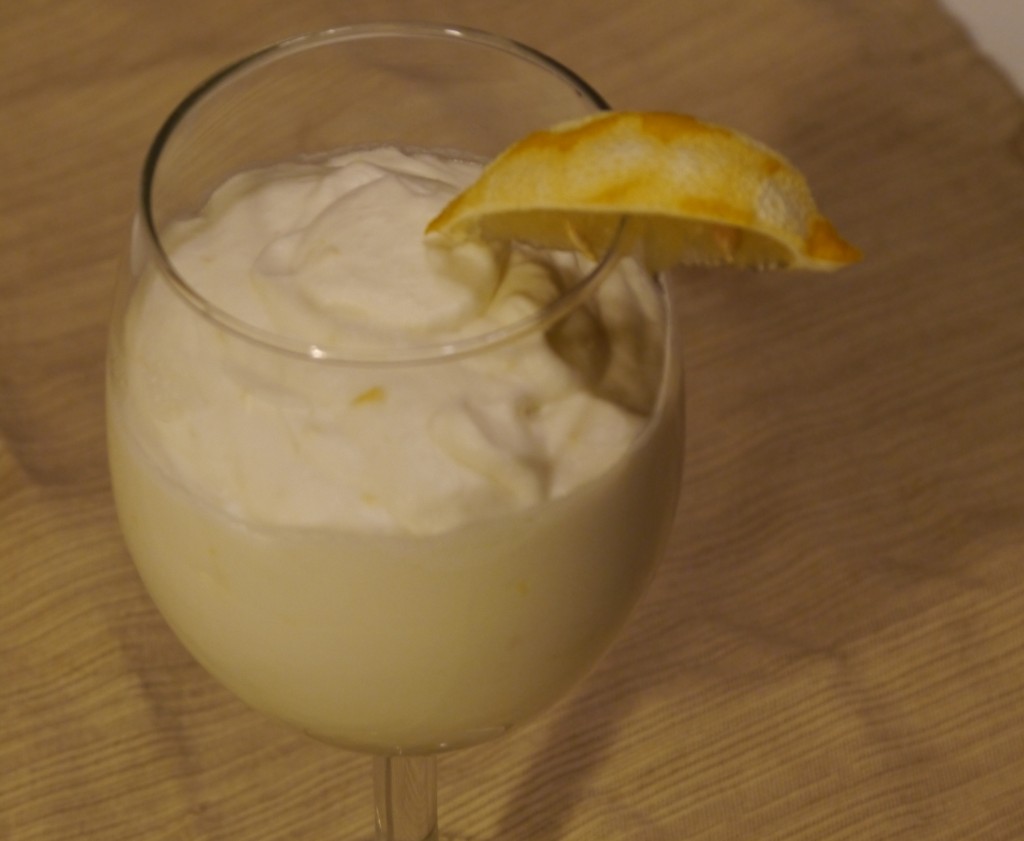 A homemade everlasting syllabub with lemon wedge garnish. The drink looks a lot like a meringue and moves like plastic until stirred. Photo by Jeff Kaplan.

Cooking With DeWitt is a column that reviews and recipe tests cookbooks from the DeWitt Wallace Library. If you dare, all books reviewed here are available for checkout.

“The Williamsburg Art of Cookery” written and compiled by one Mrs. Hellen Bullock has literally been two weeks worth of entertainment for me. With recipes from 18th and 19th century Virginia, and S’s that look like F’s, (“ſome Conſiderations on the Obſervation of Chriſtmas”), its not exactly practical. It does supply a bit of a history lesson though, and gives us a window on what people were cooking in Virginia. There is also a lesson about who was doing the cooking — several bookplates show that it was likely enslaved African Americans cooking for whites. This is probably why the white folks who wrote this book thought that whisking a mixed drink for 30 minutes didn’t seem unreasonable, but I can assure you it is.

This book’s pages keep recipes as simple as Boiled Ham and Beef Soup, and as strange as To make veal glue, or cake soup to be carried in the pocket, Walnut Catsup, and one well worth the google image search, Solomons Temple in Flummery. Outdated names and lettering aside, the book has quite a well rounded scope.
Naturally, the first section is Of Virginia Hospitality, which describes the deep seated hospitable nature “that characterized all people” from the farmer to “the popular Governor Gooch.” Following this section we get into the actual recipes, starting with Observations Upon Soups. This section is prefaced by a recipe in poetic verse:

Then skimming the fat off/ Say grace with your hat off.

Soup to be Carried in the Pocket, as it turns out, was a way of making gelatin cakes out of stock, which could be reconstituted in boiling water. Hopefully, soon we will see students that live off campus using this convenient cooking method to have a fresh bowl of veal broth at lunchtime.

The next section, Of Flesh and Fish, shows the impressive number of wild and domestic animals that folks in Virginia used to eat as well as how many different parts of them were cooked. 11 types of birds are listed, and some recipes call for lamb kidneys, loin, and necks and beef tongue. Our featured recipe for Barbecued Squirrel is also from this section; don’t get any ideas, people. One of the exciting techniques this chapter introduces is how to take 20 eggs and combine them into one giant, fake hard boiled egg. Definitely something to consider for your next potluck.

The book also features sections for Bread, Pastry, Confectionery, Cakes and Desserts. If you’re looking to compare the differences between cakes named for both George Washington and Robert E. Lee, General of the Confederacy during the Civil War, then this book certainly fits the bill. Some of the recipes really do sound delicious though, like Maids of Honor, small tarts filled with strawberry or raspberry preserves and sweet almond paste.

Of Preserving and Pickles had some interesting recipes as well. There were 3 recipes for Brandy Peaches, as well as similar recipes for apricots and cherries. The next most popular pickle was, oddly, watermelon rind. So consider saving those rinds next summer. My favorite however is of course Walnut Catsup which is made of pickled fresh walnuts (green husks and all) with cloves, mace and garlic. It goes great with squirrel too!

But I have saved the best section for last: Of Health Drinking! This section sends hilariously mixed messages about appropriate drinking culture. The Moral and Physical Thermometer pictured on the first page of the chapter is very threatening for any drinking of punch or liquor, and yet it then regales an exploration where Governor Spotswood and his gang drank their way across the Blue Ridge Mountains. (It is pictured on the side, but a larger version is posted below the article.) In any case, most of the recipes here are party sized. At least, I think most of us today would consider “Two Gallons of Brandy” a bit much for a night of watching Netflix in bed. Orgeat, which is “a necessary refreshment at all parties” though alternatively is much more temperament temperance: it’s spiced milk with almonds and rosewater.

This book certainly has a lot to laugh about as well as a lot to be confused about — there is still a unit of measurement from the book that I can’t decipher. There are certainly more useful cookbooks, but few that I’ve read that give such a strong sense of history and how much food and drink have changed since then.

Some slices of fat bacon

One Spoonful of Flour

One Teacup of Water

One Tablespoonful of Butter

Some Tomato or Walnut Catsup

Put some slices of fat Bacon in an Oven. Lay the Squirrels on them and lay two Slices of Bacon on the Top. Put them in the Oven and let them cook until done. Lay them on a Dish and set near a Fire. Take out the Bacon, sprinkle one Spoonful of Flour in the Gravy and let it brown. Then pour in one teacup of Water, one Tablespoonful of Butter and some Tomato or Walnut Catsup. Let it cool and pour over the Squirrel.

This recipe was tested and slightly modified. The original calls for one part Sherry to two parts white wine, if you’re looking for the genuine article. We drank ours after half a day in the fridge. Its best to stir it up again before drinking so it can be sipped. We kept one sitting out to test if it really is better after three to five days. Here’s to hoping it doesn’t make me sick.

A Pint of Cream

A Pint of White Wine (Riesling would be best, I used Sauvignon Blanc)

Beat and sift the Sugar and put it to your Cream, grate off the yellow Rind of your two Lemons and put that in; squeeze the Juice of the two lemons into your Wine, and put that to your Cream; then beat all together with a Whisk just half an Hour; then take it up all together with a Spoon, and fill your Glasses. It will keep good nine or ten Days, and is best three or four Days old. These are called The everlasting Syllabubs.

And as promised, the infamous thermometer!